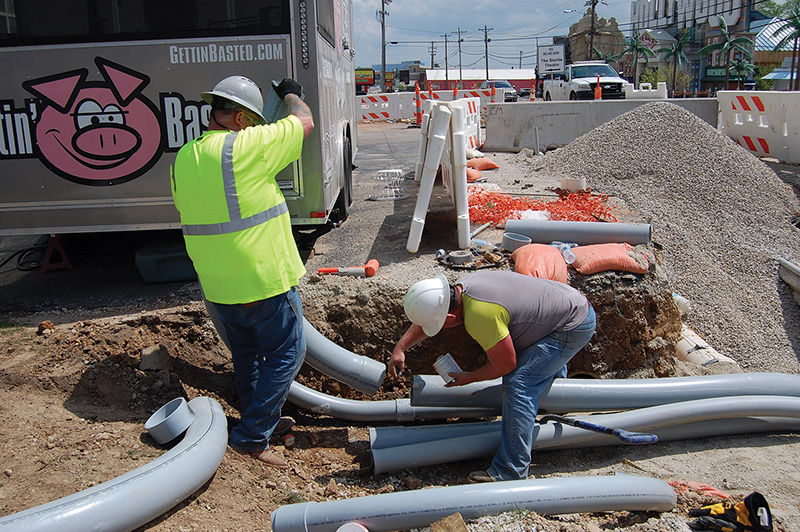 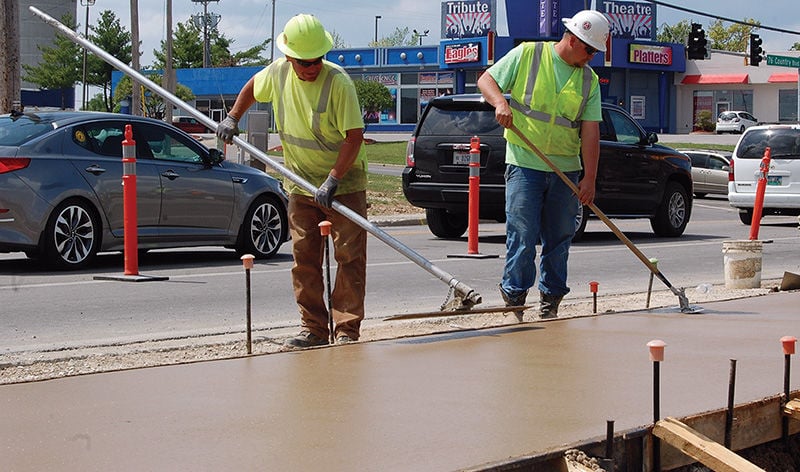 Todd Larose, left, and Gavin Enochs, with Carson-Mitchell, smooth concrete for a new sidewalk off 76 Country Boulevard near Gretna Road.

Todd Larose, left, and Gavin Enochs, with Carson-Mitchell, smooth concrete for a new sidewalk off 76 Country Boulevard near Gretna Road.

Several of Branson aldermen provided input into questions about how the city plans to fund an ambitious, ongoing 76 improvement project.

“When I first heard use our reserves to finish (segment three), I thought I was going to throw up, literally,” Alderwoman Betsy Seay said.

“But my take on that is we have businesses out there that believed in us to finish this project. They allowed us to come and tear up their driveways and tear up their sidewalks with promises of dates it would be finished by and beautification.”

City Administrator Bill Malinen presented plans to either stop construction altogether on the 76 and downtown projects within a week or to finish the current phases of construction before bringing them to a halt until more funds became available during a joint meeting last week with aldermen, 76 CID board, and the Finance Committee.

Dipping into the city’s 20 percent reserve funds in order to pay for the completion of segment three of 76 Complete Street project and phases 2 and three of the Downtown Streetscape project was suggested. The cost to finish current phases of both projects amounts to $6 million and the cost to not complete them is $5 million, according to Malinen. Reserved funds available amounts to $7.8 million.

Seay agreed using the reserved funds is an option to consider moving forward.

“We messed that up, not them. It’s our job to fix it and unfortunately, in my opinion, if that means we have to take our reserves down to make that right by those people, that’s our mess to clean up,” Seay said.

Alderwoman Cris Bohinc said the community needs be included in this discussion.

“Whatever we decide, I think we need a public forum where the community can be a part of this,” Bohinc said. “This is a big situation, the biggest I’ve ever seen at the eight years I’ve served prior.”

Bohinc said she is confused on how much the project is really costing the city due to the $16 million spent for the water line work, $7 million being paid to CFS Engineers, and an estimate of $12 million to bury the utility lines, which is not included in the $96 million budget that was presented by Project Manager Jim Martin during the April 6 study session.

“So, I don’t know where we truly are on the actual honest-to-goodness budget,” Bohinc said.

Alderman Mike Booth said he wanted to know how much the city needs to bond and much debt service is available.

“We have to have actual dollars and cents, here’s how many dollars we have to serve this debt and here’s our projected income,” Booth said.

Booth also expressed concerns about the city having any “cost-overs” or extra expenses after phases and segments were to have been completed.

The one thing many of the aldermen agreed upon was in order for the 76 project to continue, the 76 CID annexation and 1 percent sales tax agreement needs to be in place.

“This project doesn’t go forward without the CID annexations complete,” Seay said. “You just can’t do it.”

Gail Myer, vice chairman of 76 CID board, was one of the few board members present to express his thoughts regarding the 76 project.

“Taking some time to thoughtfully identify the roles and goals of the council, the CID board and the stakeholders will greatly help the future in this project,” Myer read from a prepared statement.

Myer discussed his concerns regarding the CID board itself.

“I’ve been perplexed as to how the CID board has been used in the crafting and implantation of this project.

“The structure today isn’t being utilized properly for important decision-making, and the fact that city formed our board with three representatives from the city and four stakeholders would indicate that the intent was for it to be an operating board to the benefit of the business stakeholders and the city’s interest. To date, we are not operating in that role and my hope is that we can improve that functionality,” Myer read.

He also mention three challenges the board and project are facing including the project’s money resources, the timing and expenses for CID annexation, and the timing for having enough creative designs within the project.