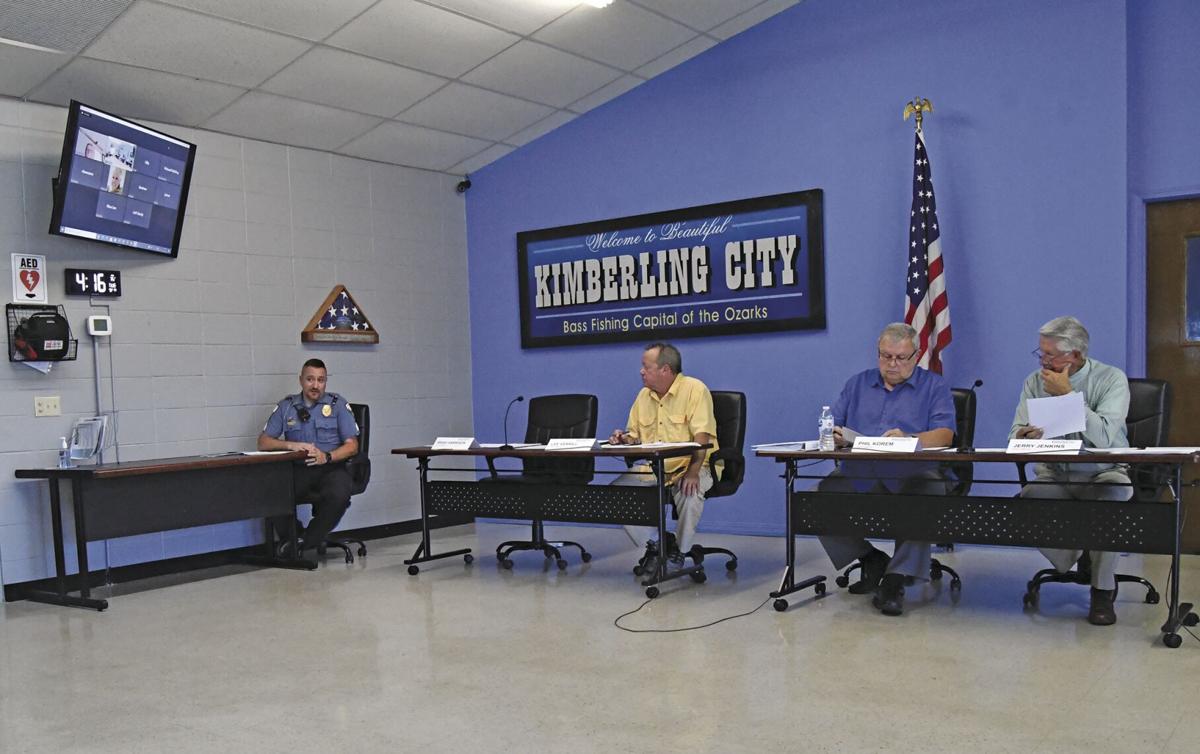 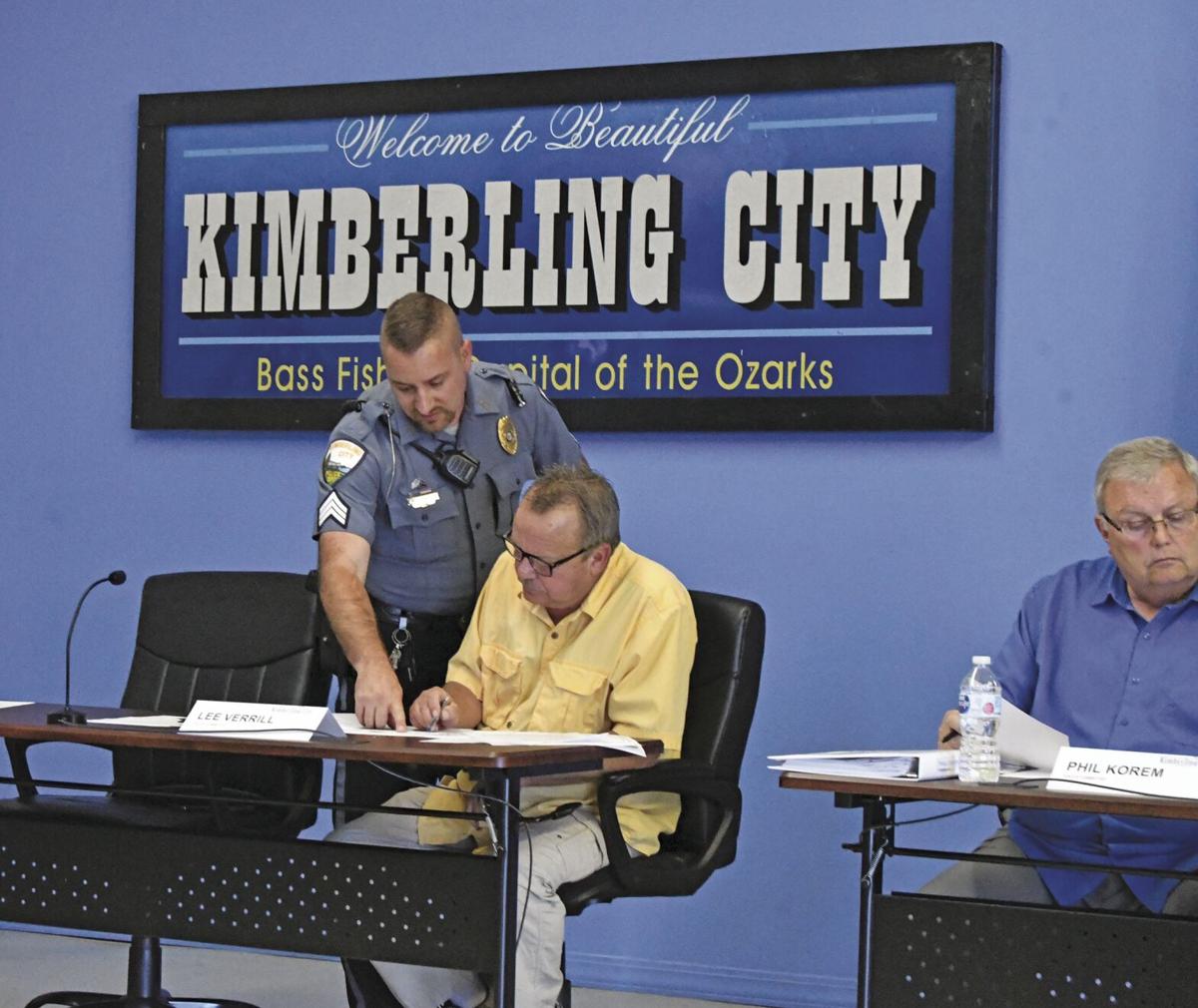 The Kimberling City Police Committee had their regularly scheduled quarterly meeting on Tuesday, Sept. 14, which included a public discussion followed by a closed session.

During the public meeting, which was attended and watched on ZOOM by dozens of Kimberling City residents, the committee, city administrator and mayor all spoke about the plan to address the city’s current situation of having an empty police department after the entirety of its officers resigned between Aug. 23 and Sept. 7.

Police Committee Chairman Jerry Jenkins opened the meeting by addressing those in attendance and explained the committee would need to vote to open the floor up for public comment as it was not on their agenda.

“Normally we do not have the privilege (of) having all of you folks at our police committee meetings,” Jenkins said. “So I might just share with you, because we do not normally have our citizens available, but they are always welcome to come, we want to invite them to do that. We do not have a place on our agenda for the public. So I am going to have to ask our committee to make a motion to open it up.”

The committee members made a motion, with a second and voted unanimously to open the floor up for public comment.

Before the public was allowed to speak, Jenkins let the public know that the committee would be taking any comments or questions to a closed session to discuss.

“This is a police committee meeting. This is not an aldermen meeting,” Jenkins said. “As a police committee meeting, we focus on things that are going to be a part of our agenda, reports on calls for service, citations and things like that. If you are here to just observe and listen, we are going to share that information with you. If you want to make a public comment, I just want to inform you to make that comment to the committee. If you have a concern about something that you want to bring before the police committee, we will take that information, make a note of it. We will go into closed session at the close of this meeting and we will evaluate the (comments) and then we will make a recommendation to the aldermen. If you want to make a comment, you are allowed three minutes to make a comment.”

The public was given an opportunity to speak at the beginning of the meeting with only two residents taking to the podium.

Korina Branson-Jones, who is on the Kimberling City Park Board Committee was the first to speak commending the city and the administration for their efforts.

“I wanted to come and commend our entire city. All the way around, all the committees, the administration, the counsel, the police department, and all the other committees who serve in the city because I think it is a vital service you can (do) for your city,” Branson-Jones said. “I want to thank you all first off…The issue that a lot of people don’t understand is that we do have to balance what we pay and what the fair pay for our officers is with what is budgeted within the city.”

Branson-Jones said from what she understands the city is budgeting some raises for future officers.

“I do have total and utter confidence in the current counsel and administration to make the choices for new officers as replacements,” Branson-Jones said. “Hopefully (the police committee) will be a part of that process also.”

One other resident spoke and simply asked the committee how this happened.

There were no further comments made and the committee then conducted their regular meeting as per their agenda.

During the new business section of the meeting, the committee discussed with Jerry Harman, the city administrator, hiring new officers, their potential pay rate, the 2022 budget and the potential of placing a Law Enforcement Sales Tax on the ballot for Kimberling City next year.

Harman explained to the committee they had several applications which have come in to potentially fill the positions left vacant, and the process to start sorting through the applications would begin soon.

“For the chief (position), there are 50 plus applications. None of those have been vetted or looked at yet. None of them have been gone through,” Harman said. “For officers we have 20 applications, right now. There are a few email applications, but once again I haven’t looked at, really, any of those. Those will be going to, I guess, interview committees.”

Harman explained the jobs are posted on Indeed, the Missouri Municipal League website, and on the Police Chiefs Association. City Clerk Laura Cather added the jobs were also posted on the Kimberling City website.

Jenkins said the city has had some investigation into pay scale and wages for the police officers.

Harman also explained to the committee the city looked on Indeed at other cities to gather information on pay scales.

Harman said the pay rate information was for hourly wages and did not include benefits.

Sergeant Aaron Hoeft, one of the resigning officers, jumped in explaining he hadn’t been a new officer for many years now, but it was $15 when you started and after six month officers received a raise and then received a second raise a year later. Hoeft said after one year officers were making $16.50.

“When talking to the chief before he left, the ad on Indeed was for $16 to $17.50 depending on experience,” Harman said.

“What was our lowest officer being paid?” Verrill asked.

Harman stated the lowest pay for one of the officers resigning was $15.34.

“We are going to start new officers higher than that,” Verrill questioned.

Harman said the lower paid officers pay rate would have been brought up to the scale.

Verrill asked if the city is current to where it needs to be for their officers’ pay.

“I mean it has already happened, the police are resigning, but now we are hiring new officers and paying them more,” Verrill said as the public in attendance clapped. “I don’t get it. It’s kind of like closing the gate after the cows get out.”

Jenkins said the committee would have to look into adjusting the pay scale.

“We will make recommendations to the aldermen (about pay). It will be helpful to see where we are compared to other municipalities,” Jenkins said.

Harman said the aldermen were discussing the possibility for the city to place a sales tax issue on the ballot for law enforcement funds.

“There are all kinds of different taxes (which) can go out there and of course, no one likes taxes,” Harman said. “A Law Enforcement Safety Tax would go directly and only to be used for law enforcement. If this committee recommends that, hopefully (you) will go to the board (of aldermen) and say ‘Hey, here is what would help.’”

Harman answered questions on how the sales tax would work, and the fact the money could not be allocated to anything other than the police department.

Jenkins said the committee would discuss the potential sales tax during the closed session and would come back with a recommendation at their next meeting.

If the committee recommends a Law Enforcement Sales Tax to the board of aldermen, and the board agrees, it would then be placed on the next ballot as an issue for the citizens of Kimberling City to vote on. The earliest it could be seen on a ballot would be April 2022.

Harman explained to the committee the police are currently being funded through the city’s general fund, which funds several other city departments.

“I don’t want to go into extensive budget education here, but the police budget is wrapped in with administration, court, building inspection, emergency management and parks and recreation,” Harman said. “So the 2021 budget total revenue for (the) general fund was right at $900,000. The budget number for police expenses included salaries, taxes, and retirement was $371,000. And then another $164,000 were expenses for the department. That is kind of an anomaly because we have two cars this year we are purchasing. That is a total of $535,000, (which) is 60% of the total revenue out of the general fund. Although we have a $2.4 million budget, we can not use any money out of the road and streets into the general fund. We can’t use any money out of utilities to go to the general fund. If we do, the city has to pay those back within 12 months.

“Basically the general fund funds administration, police, emergency management, parks and recreation, building inspection and court. Just to give everybody an idea of where the police are in the budget.”

Harman said the 2022 budget is in the preliminary processes right now, but the salaries of the new officers would be taken into account for the budget and the aldermen decide how general funds are divided.

Harman said if a law enforcement sales tax was approved, it would help.

The floor was then open for committee members to speak on any of the items discussed.

“It is clear we have to do something so we can retain officers,” Police Committee member Phil Korem said. “I haven’t been made privy to all the information yet, but it is obviously startling to lose the entire police department. Going forward we have to have a salary which is at least something someone can live on and is competitive with the other agencies. I think the idea of the tax is a wonderful idea to directly fund the police department. It goes without saying all steps should be made to make this as speedy of a process as possible. I am sure everyone here was just as shocked as we were with the department resigning. From this point forward we need to make sure this doesn’t happen again.”

“I think some people in this room probably think we knew something was going on,” Verrill said. “I assure you we did not. I got a phone call from the chief and he said ‘I am resigning.’ It shocked me. Then I found out all the other officers resigned...I hate it because these guys have had 16, 17, 18 years with us. I think this police department is the best we have ever had. Moving forward is going to be rough, but we have no choice.”

The committee adjourned to a closed session to discuss the items on the agenda in more detail. The committee said it will likely  meet in October, ahead of their previously scheduled December meeting due to the budget needing to be discussed.

Watch for future stories about the sales tax at Branson Tri-Lakes News as they develop.