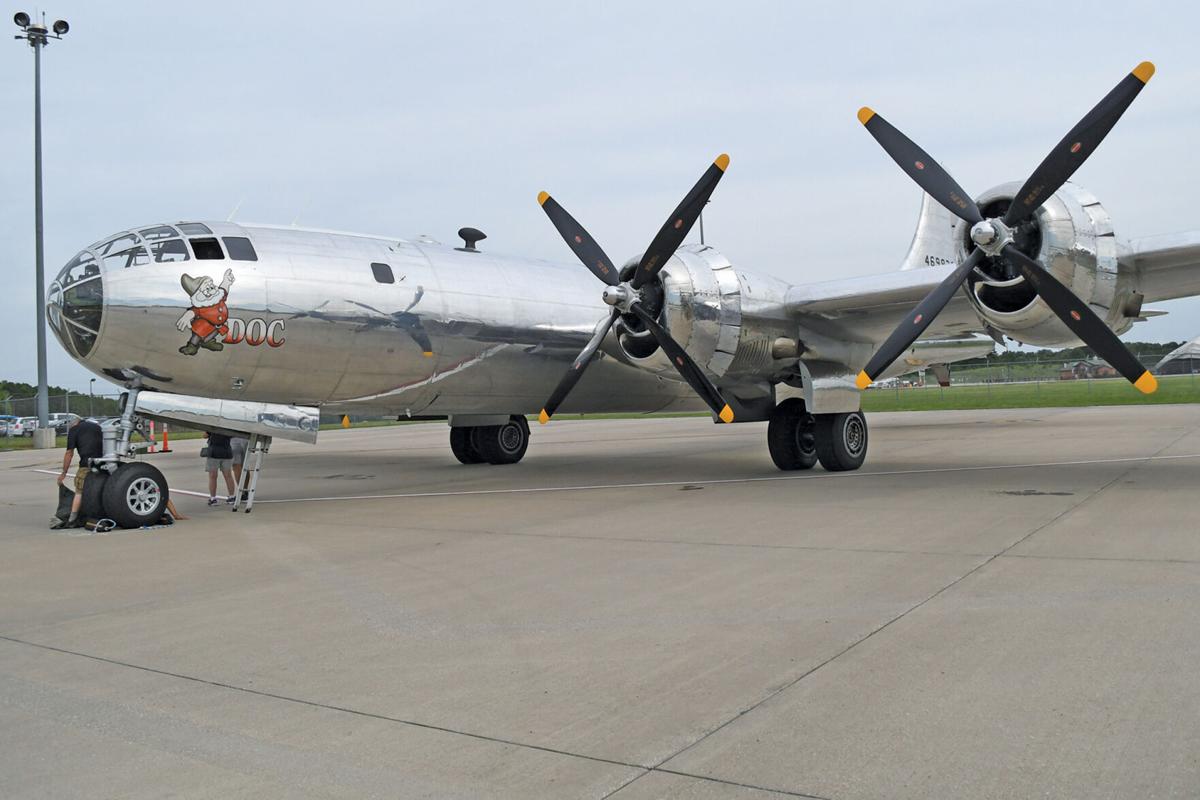 For three days, the airport hosted one of the two still-flying B-29 Superfortress aircrafts known as Doc. 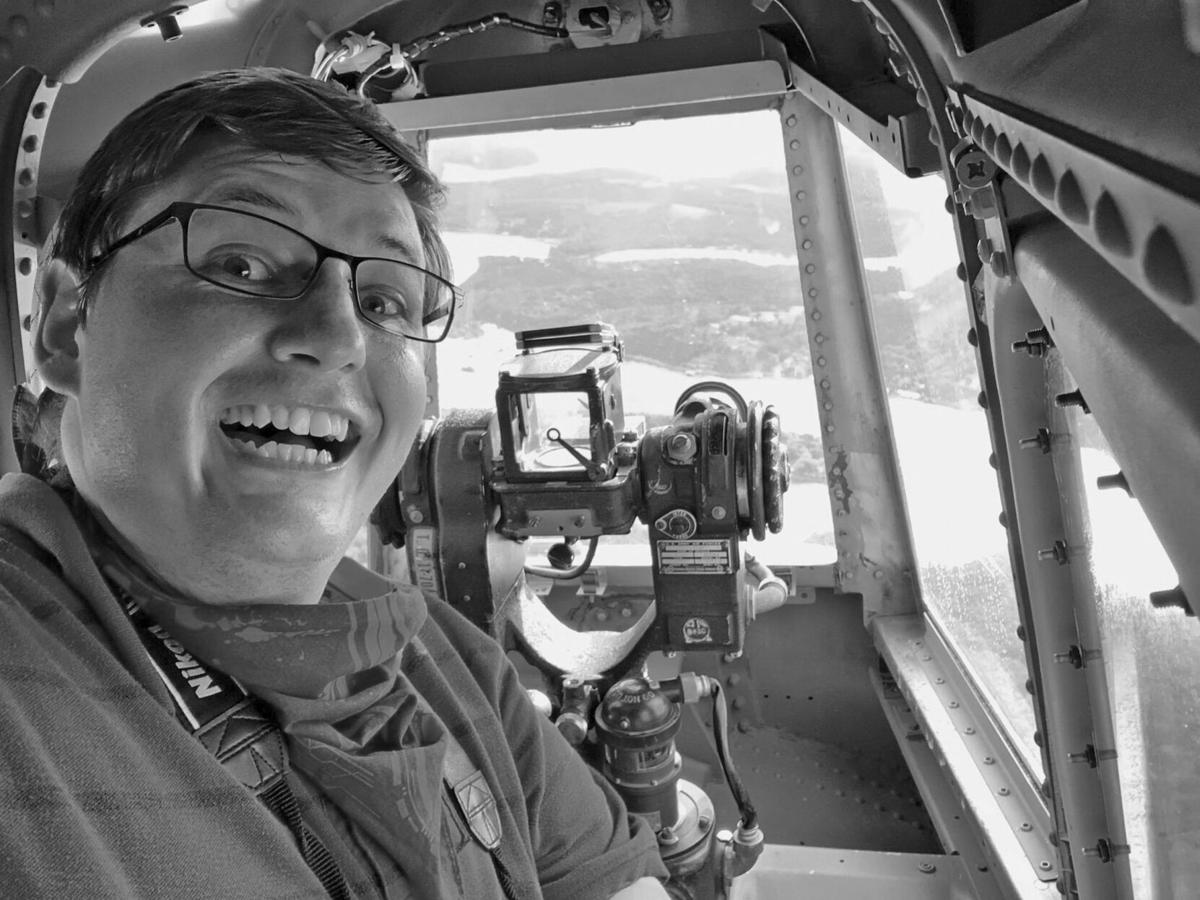 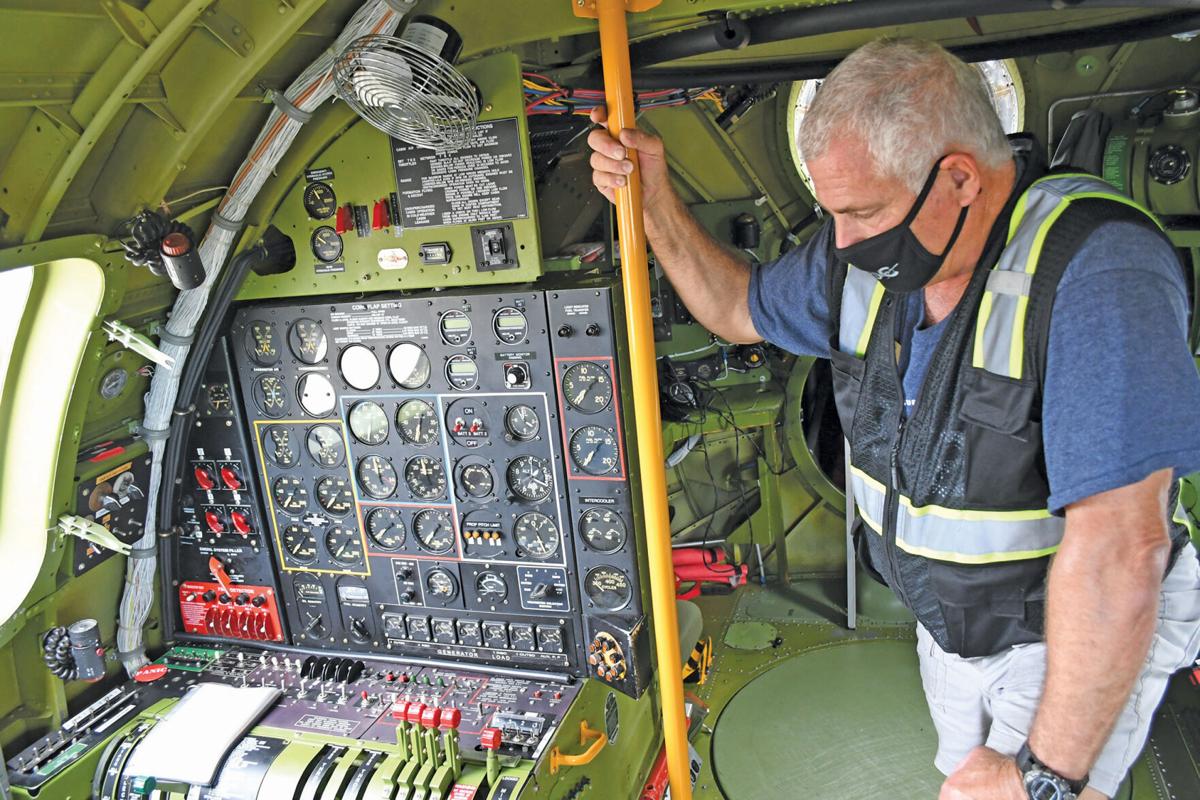 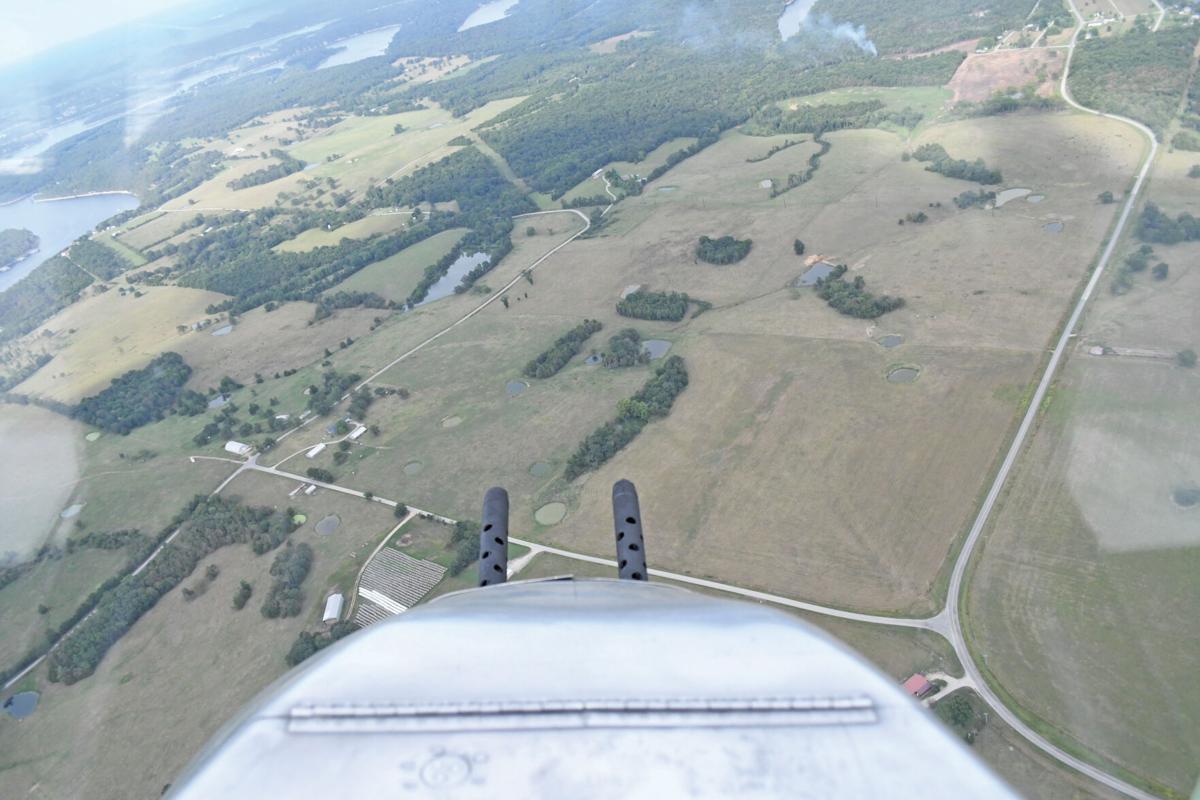 The view from the tail gunners seat as Doc flies over the farm lands of Taney County. 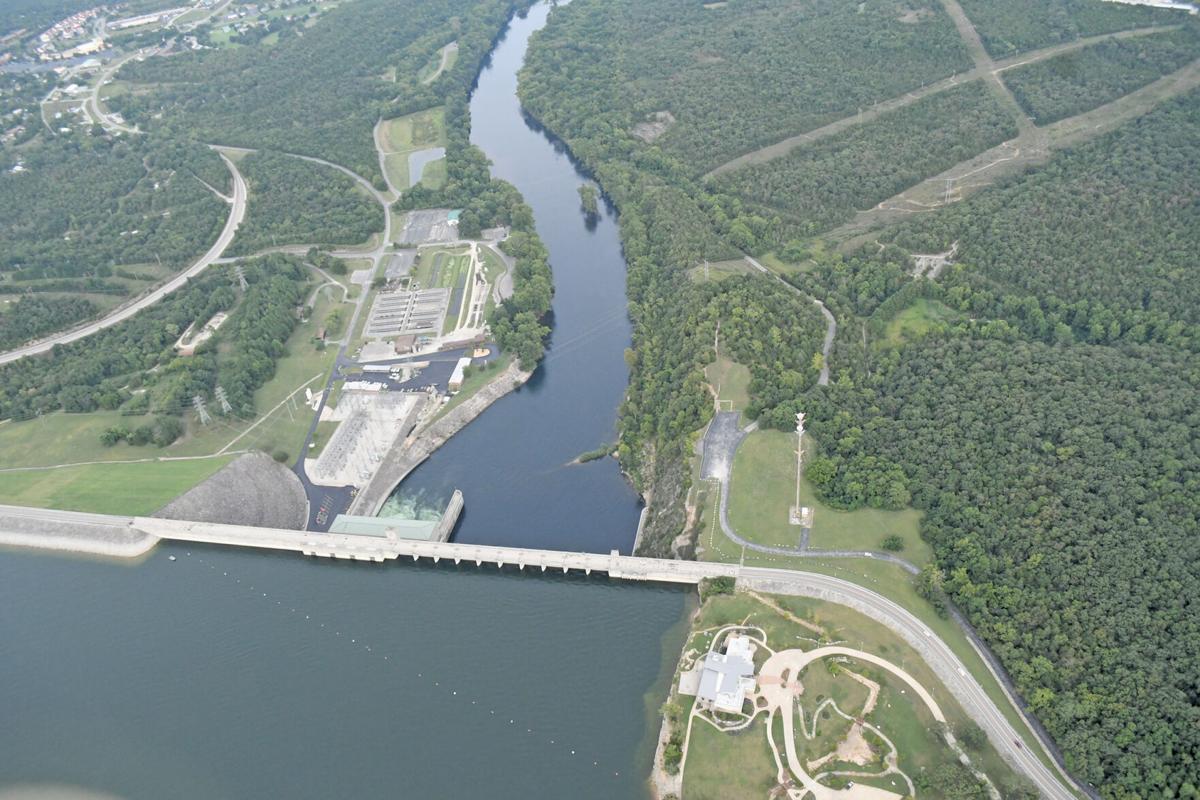 The view from above as Doc flies over Table Rock Dam. 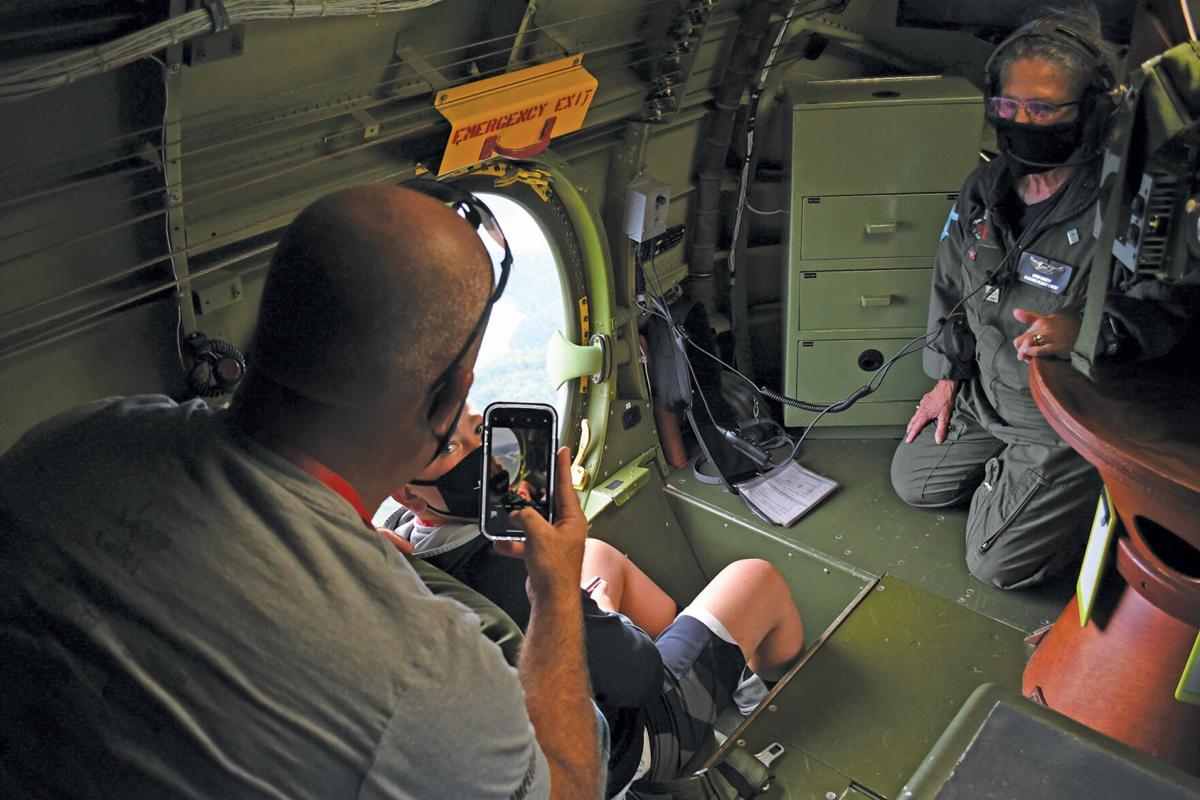 Brad Daniels grabs a photo of his son Ethan Daniels sitting in front of a window aboard Doc.

For three days, the airport hosted one of the two still-flying B-29 Superfortress aircrafts known as Doc.

The view from the tail gunners seat as Doc flies over the farm lands of Taney County.

The view from above as Doc flies over Table Rock Dam.

Brad Daniels grabs a photo of his son Ethan Daniels sitting in front of a window aboard Doc.

How do you describe a once-in-a-lifetime opportunity or explain to someone what it’s like to cross something off your bucket list?

I’ll be honest with you. It’s a lot harder than one would think. I’ve done a lot of extremely cool things in my media career from meeting celebrities to getting to hold a prop lightsaber from Empire Strikes Back, but nothing compares to the adventure I’m about to tell you about.

On Thursday, Sept. 3, I ventured out to the Branson Airport. For three days, the airport hosted one of the two still-flying B-29 Superfortress aircrafts known as Doc.

Now Doc’s story begins when he rolled off the assembly line in March 1945 in Wichita, Kansas. While built during World War II, Doc only served in non-combat roles. In July 1951, he was assigned to radar calibration duty as part of the squadron known as the Seven Dwarfs.

Unfortunately, in 1956, Doc and the rest of his squadron became targets for bomb training in California. In 1987 a gentleman by the name of Tony Mazzolini found Doc in the Mojave Desert, where he was being used as a target for the U.S. Navy. After several years, Mazzolini was able to make a deal in 1998 to take possession of Doc. In 2000, Doc returned to the Boeing Company in Wichita where he spent the next 16 years being restored by hundreds of volunteers.

When I arrived out at the Branson Airport, I was introduced to Frank Berry, Doc’s historian and a member of the Doc’s Friends flight crew.

Berry took me on a tour of Doc, including a climb into the cockpit. During the tour, Berry filled me in on Doc’s military career, the restoration process, and maybe most importantly, why Doc’s Friends do what they do.

Berry said that out of 4,000 B-29s built, there are only about 26 of those B-29 aircraft frames still in existence, and, as I said earlier, there are only two B-29s still flying today, Doc and FIFI. FIFI serves with the Commemorative Air Force AirPower History Tour and has come to the Branson Airport several times as part of the tour. I’ve always been fascinated by the B-29, and I’ve been lucky enough to tour her a few times. Since then, it’s been an item on my bucket list to fly in a historic airplane.

As part of Doc’s travels, Doc’s Friends offer what is called a flight experience tour where passengers have the chance to fly on the restored aircraft. Doc has four passenger seats up in the front of the plane and seven seats in the back. During the flight, passengers are invited to then roam about their respective compartments, with the exception of the bombardier.

“The others in the front can get up and move around and come right up to the pilots, watch the flight engineer do his thing, watch the pilots do their thing. Everybody in back can get up and sit in the scanner seat, sit in the central control gunner seat, and they can crawl back to the tail and sit in the tail gunner’s position,” said Berry. “It’s about a 90 minute experience. You’re on board about an hour and about 30 minutes of that is flight time.”

Following my tour of Doc with Berry, I had already arranged with Branson Airport Marketing Director Ty Lewis to join him on the hilltop across from the runway to get some photos and video of the plane when it went up with a group of passengers who had come for a flight experience tour. However, Doc’s Friends had a different idea.

Just moments before the 5 p.m. flight time, Executive Director and General Manager of Doc’s Friends Josh Wells came up to me and offered me the chance to join the rest of the passengers and crew for the flight. Let me tell you, I was dumbfounded. Somehow, after asking Wells about a dozen times ‘Are you sure?,’ I managed to say ‘Yes.’ Next thing I know I’m a part of the flight debriefing and then being escorted to one of the gunner’s seats in the aft section of the aircraft.

The take off was super smooth. I didn’t even realize we had left the runway until we were already in the air. For the flight, I was joined by five other passengers in the aft, which included recently elected and soon to be Taney County Sheriff Brad Daniels and his son Ethan Daniels, Nathan Bourk, Phillip Drips and his 7-year-old son David Drips. While in the air, we each took turns going up and sitting by the two bubble windows in the aft just behind the wings. I was excited to have taken my turn at the window just as we flew over Table Rock Dam. It was beautiful.

We also all took turns going back into the tail of the plane to sit in the tail gunners seat. The fun/challenging thing about getting to the very tail of the plane is that you have to crawl on your hands and knees to get back there, but it was so worth the climb. The views from above were spectacular.

I thought of the heroes that were made and lives that were lost all while flying on a B-29 just like the one I was in. I thought about the fear and comradery that must have come from being together inside such an aircraft. I thought about the responsibility that must have come with flying on a superfortress. Those thoughts left me with mixture of emotions, which included pride, sadness, honor and more. Having those feelings in that moment is something I will treasure forever. My respect for veterans and active military has always been extremely high, but this journey only brought it even higher.

We were in the air for just over 30 minutes, but they flew by so quickly. I guess it’s true what they say about time flying when you’re having fun flying.

Since my trip to the skies, I’ve been asked several times ‘How was it?’ It’s been difficult to put into words as the journey has nearly left me speechless. Words like amazing, excellent, beautiful, exhilarating, humbling, wonderful and most triumphant just don’t seem to do it justice. But I hope they give you an idea.

Now that they’ve come to Branson once, I’m extremely hopeful that Doc and his friends will be making a return trip to the area in the future. And hopefully when they return, we’ll be in a little less of a global pandemic and everyone will have the chance to get up close and personal with Doc.

I just can’t thank Doc’s Friends and the Branson Airport enough for giving me this opportunity. This experience was like no other. Thank you.

To learn more about Doc and his next tour stop, visit b29doc.com.

Hey Tim, what a great privilege to have flown in a B-29! The Commemorative Air Force keeps warbirds flying and their stories alive. Hopefully the CAF will return next year