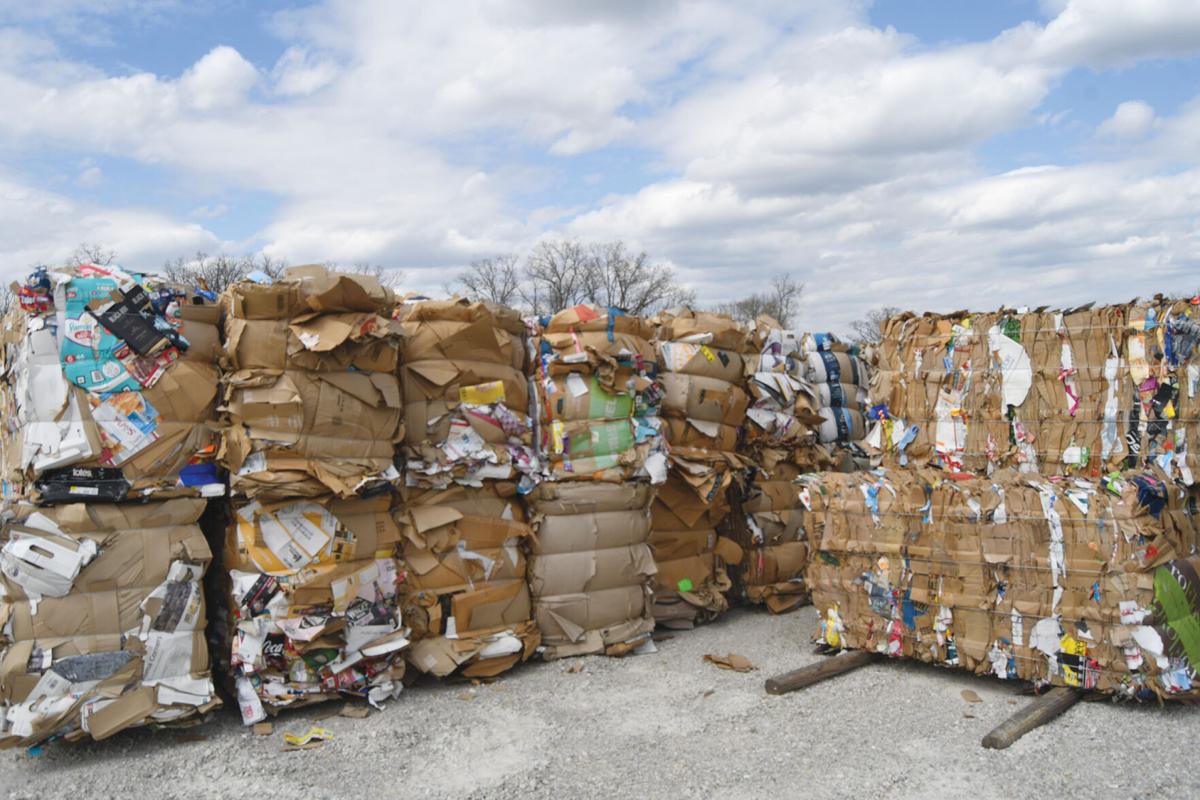 The recycling center has had over 28 bales of cardboard brought in to be recycled since opening on Feb. 1. 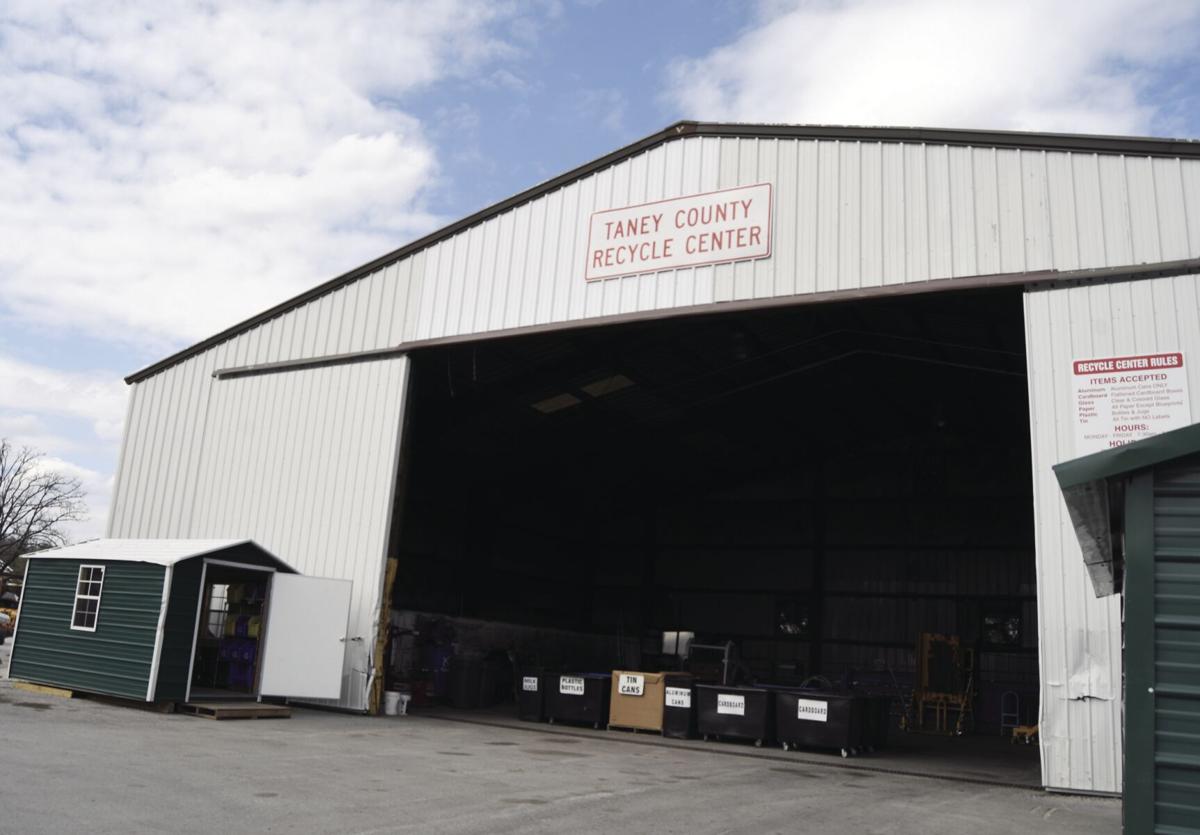 The Taney County Recycling Center on Buchanan Road is open to the public. The center has bins labeled so that visitors can easily sort the items they want recycled.

The recycling center has had over 28 bales of cardboard brought in to be recycled since opening on Feb. 1.

The Taney County Recycling Center on Buchanan Road is open to the public. The center has bins labeled so that visitors can easily sort the items they want recycled.

In January, the city of Branson closed their recycling center after over 20 years of operating, but residents of Branson and the surrounding area can still recycle, just at a different location.

The Taney County Transfer Station took over the recycling equipment and responsibility at their location at 274 Buchanan Rd., according to Branson Tri-Lakes News archives.

The Taney County Recycling Center opened its building and service to the public on Feb. 1. The center is open to the public Monday through Friday 7:30 a.m. till 4 p.m., except for holidays.

“We took over operations for the Branson Recycling Center and are completely open to the public,“ said Taney County Highway Administrator Devin Huff. “We have everything set-up so it is easy for anyone to come in and recycle. Since February, we have seen a lot of people coming in just to recycle.”

According to Huff, the takeover of the service has been successful in the first two months.

“The transition is 100% good, no hiccups,” said Huff. “I think we are doing great from just word of mouth, letting people know we are open for the recycling center. We have never officially done an announcement or anything to let the public know we are open. We haven’t really announced it, but now we are. We want people to know that we are doing this for the community.”

According to Huff, they are averaging about 50 cars a day coming in to recycle.

“We would like to see that number increase as more people become aware that this service is out here now,” said Huff. “This area is set-up to handle a lot of people. We are just wanting to let people know we are here.”

There are bins and areas in and around the center building that are set-up and labeled for the different types of recyclable items that are brought in. The recycling center accepts the following materials:

- Glass, clear and colored with no lids. No Pyrex or ceramic.

- Paper, all paper except blueprints. Shredded paper should be separated.

All items need to have lids removed, and must be empty, rinsed out and dry when they are brought in for recycling, according to the Taney County Recycling Center brochure.

According to Huff, the best way to ensure that people can get in and out quickly is to sort items before they get to the center.

“People usually have their items already separated in their own bins or containers so they can easily and quickly get their items in the correct bins,” said Huff. “If they don’t have their items presorted it can take a while to get everything figured out and in the proper place in the center.”

Huff explained that the recyclable items are either crushed and baled, or sorted into gaylords, which is basically a bulk-size corrugated box after they arrive at the center.

“There are semi-truck trailers that are filled with all the recyclables that have either been compressed into bales like the plastic bottles or are in gaylords,” said Huff. “The gaylords can hold a lot of material. One of the gaylords in this trailer has brochures in it and it weighs 1,888 pounds. We double stack these and the bales in the trailers so we get a lot in a semi-truck trailer. We have already taken one whole trailer full since Feb. 1 and our second one is over half way full.”

Cardboard is also baled at the center and is stacked outside until there is enough for a semi-truck load, according to Huff.

“Since Feb 1, we have over 28 bales of cardboard, which is almost enough for a semi-load,” said Huff. “Once we get enough we will load it all on a semi-truck and take it where it can be recycled.”

According to Huff, staff keep the center and area tidy.

“We try to keep it clean,” said Huff. “We have had a lot of people come in and tell us this is the cleanest recycling center they have ever been to. That means a lot.”

Mondays are the transfer station and recycling center’s busiest days, according to Huff.

“On Mondays, which are our busiest day, we will average 225-250 people for the transfer station who bring their household trash in and average 50 cars for the recycling center,” said Huff. “Monday through Wednesday are when we see the most people. Thursday and Friday it slows down.”

The transfer station has been here for a while, but it is helpful that now people can recycle and dispose of their trash all in one location, according to Huff.

“We are a transfer location as well, for household trash or larger items, like furniture, appliances and tires,” said Huff. “ We actually cut up all the tires that come in before we haul them off to the landfill. The transfer station averages 35,000 tons of trash a month. We haul off an average of eight trailer loads a day to the landfill. Local trash service companies use the transfer station, as well as individuals. It is good to be able to offer both these services, recycling and trash disposal, to the community in one location.”

According to Huff, everyone who comes to the center should enter and exit at the weigh station lanes. This helps the county keep an accurate track of the number of people that are using the service.

“Last year we got the new scale entry and exit with the new weigh in station building, now we are high tech,” said Huff. “We ask that when someone comes here, whether they are recycling or using the transfer station, they should all come in at the weigh station lane. They will (be) asked, at the building, if they have recyclables or trash. If they have recyclables only, they will be directed to the recycling building. If they have trash for the transfer station, they will be weighed coming in and going out. After, they can exit over the weigh out lane.”

According to Huff, the recycling center has had help from the community to keep the costs down to run the center.

“We have community service groups and people that come out and help with the recycling, that helps keep the overhead down,” said Huff. “Volunteers need to be over 21, and groups and individuals who want to help can call the office to let us know when they would like to come out and help.

“We have a really good community operation here, and we want people to know about our recycling services. We want the community to be able to dispose of their trash and recyclable items here so that we help keep our roads and county clean.”