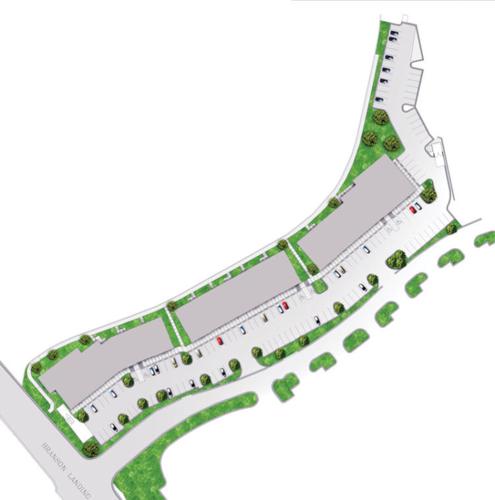 An artist’s rendering shows the three buildings set to be constructed at the north end of Branson Landing.

An artist’s rendering shows the storefronts of the new retail space going in at the north side of the Branson Landing. Construction is tentatively set to begin in September.

An artist’s rendering shows the three buildings set to be constructed at the north end of Branson Landing.

An artist’s rendering shows the storefronts of the new retail space going in at the north side of the Branson Landing. Construction is tentatively set to begin in September.

After years of a hold on development at the Branson Landing because of litigation, HCW Development, LLC, submitted plans to the city of Branson for more retail space on the north end of the property.

HCW CEO Rick Huffman said the company can now develop because a lawsuit involving the land was settled in St. Louis County court.

HCW is planning for the development of 29,000 square feet of retail space, Huffman said.

“That is out to bid as we speak; plans have been turned in to the city for building permits,” Huffman said. “We’re waiting for comments, but I would anticipate probably a late September start date with the completion in May.”

HCW is looking for new tenants for the three buildings and Huffman said HCW has received letters of intent from several interested parties.

Demand for retail space at the Landing has been high, he said.

“This space is obviously not in the heart of the Landing, but it’s on the north end and it will have new stores in it,” Huffman said. “And we added some parking.”

Huffman said roughly 130 parking spots will be added. He won’t know how many stores will be in the space until he knows how much space retailers will require.

Huffman said HCW will get leases signed once the company receives bids for the construction. The bidding period closes Aug. 5, he said.

Huffman said there is good diversity of retail stores among interested parties, noting some restaurants could move in.

The estimated cost of construction is $1.5 million.

Crews are currently completing ground work at the site. The estimated construction value is $550,000.

Hornickel said the city also received plans for a Chick-fil-A.

“At this point, we have the plans,” he said. “I don’t know if anything has been expressed to us on what their timeline is.

The restaurant is planned to occupy space between McDonald’s and Casey’s General Store on Main Street, Hornickel said. The estimated construction value is $1 million.