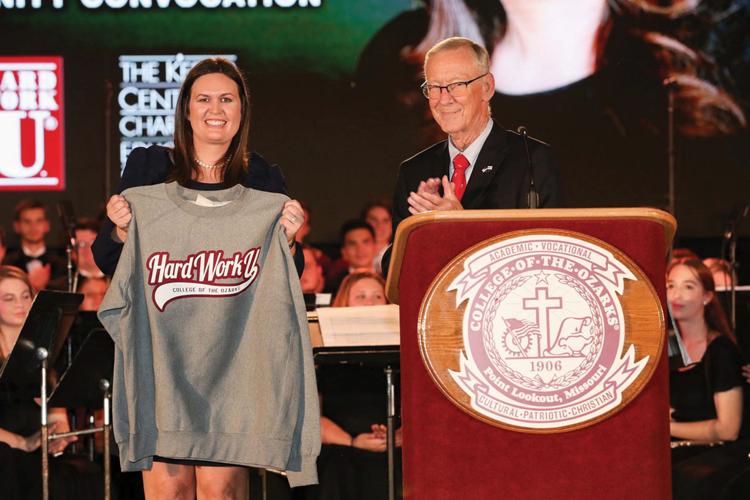 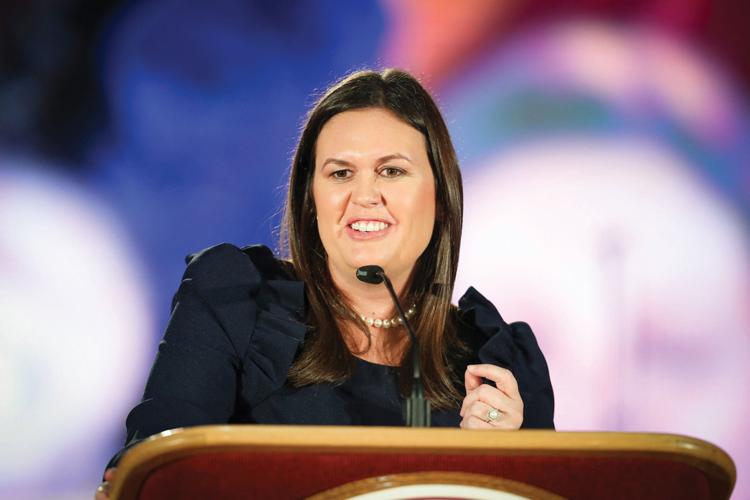 College of the Ozarks hosts Sarah Huckabee Sanders, former White House press secretary, as the speaker for the Leonard B. and Edith Gittinger Community Convocation on Thursday, Oct. 10.

College of the Ozarks hosts Sarah Huckabee Sanders, former White House press secretary, as the speaker for the Leonard B. and Edith Gittinger Community Convocation on Thursday, Oct. 10.

On Thursday, Oct. 10, College of the Ozarks welcomed Sarah Huckabee Sanders as the guest speaker for the Leonard B. and Edith Gittinger Fall Community Convocation.

Sanders, who served as the White House press secretary for President Donald Trump from 2017 until just earlier this year, found herself in front of more than 3,000 people, who came to hear her speak.

In her address to the crowd, Sanders said that while being the former White House press secretary was a great role and an incredible position, she believes the most important job she has is that of being a mother to her three children Scarlett, 7; Huck, 5; and George, 4.

“A lot of times people ask me, ‘Sarah how did you do it? How did you work at the White House and still be present for your kids,’” said Sanders. “Some days we did better than others, but a lot of times what I tried to do is engage my kids and bring them with me and have them see why it was important to be involved.”

Sanders went on to share a story of the time she brought her son Huck with her to the White House for bring your child to work day. She explained that the first part of the day went great, but things started to change the later the day got.

She said things didn’t get much better when she and the president stepped outside.

“As the president’s walking down, I come out of the same door about 20 yards behind him. Huck, not to be outdone by his peek inside the Oval Office, he comes charging full speed at the president,” Sanders said. “I don’t know if you know, but the president is surrounded by people with guns at all times, including on the colonnade.

“Just as the Secret Service are about to intervene and the president kneels down to greet Huck, he sidesteps him, goes around him, completely ignores the president and jumps into my arms. It was in that moment that I knew I hadn’t done it all wrong. Because for every other person in the world, the President of the United States is the most important person, but to my 5-year-old, it was me.”

Sanders also told another story of how, while traveling to a campaign event for her father, Mike Huckabee, in Mountain View, Arkansas, she and her best friend Lauren Brown were in a serious car accident.

Even though their car tipped multiple times, and the only thing that prevented them from rolling down a steep cliff was a single tree that the vehicle crashed into, they suffered no serious injuries.

“I look back on that day, and it was a reaffirmation of God’s grace. You see, the bigger part of that story is that Lauren Brown later became Lauren Huckabee, my sister-in-law,” said Sanders. “She’s the mother to my two nephews and my niece, who are my children’s best friends. They all go to school together. Every single day we see them together, it’s a reminder of God’s grace and a reminder to live a life worthy of being saved. It’s a constant reminder that God is in control and that we have to trust him. Not just in the big things. Not in the small things. But in everything.”

At the close of her address, Sanders shared one final story with the crowd. She told them the story of how, at the age of 11, she traveled with her parents to Israel. During the trip, they toured the Yad Yashem Holocaust Museum. Sanders said that during the tour, she walked in silence alongside her father and never left his side. She explained at the end of the tour there was a guest book for people to sign their names, but it also had a place to leave a comment. Sanders said she signed her name and next to it chose to write, ‘Why didn’t somebody do something?’

“My Dad, like all of you – because of your presence in this room – have already made a commitment to be the somebodies that do something. (My Dad) wanted me to know that, if good people don’t stand up and stand for what’s right, than evil prevails. Christians should never, ever allow that to be them,” Sanders said. “God calls each of us to take a stand against evil and a stand for what is right. As we leave here tonight, let us take that with us. Let the words of that 11-year-old who got it, be the encouragement to be the somebodies who do the something.”

At the close of her address, Sanders also took questions from a handful of pre-selected C of O and School of the Ozarks students. C of O President Jerry Davis also presented Sanders with the customary Hard Work U sweatshirt, and other gifts handmade by students at the college.

The convocation for the evening also included the presentation of the inaugural Head, Heart and Hands Awards, which are given to those who reflect the very characteristics of ‘citizens of Christ-like character who are well-educated, hard-working and patriotic,’ that the college strive to inculcate in the life of each student. This year’s recipients of the awards were Bob and Patricia Barker, Helen McVey and Harold and Allyn Barrett.