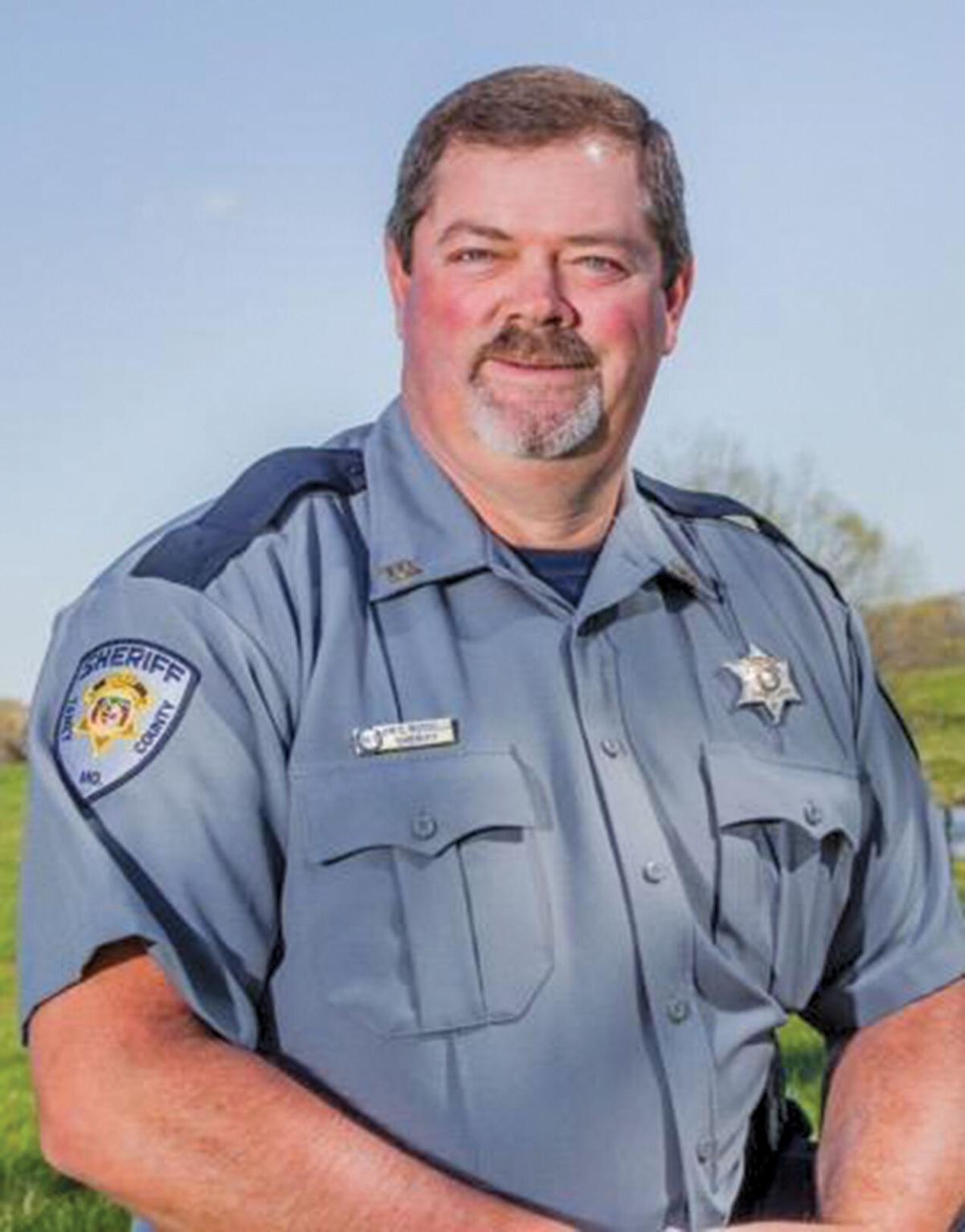 Jimmie Russell will be retiring at the end of 2020 after 20 years as the Taney County Sheriff. 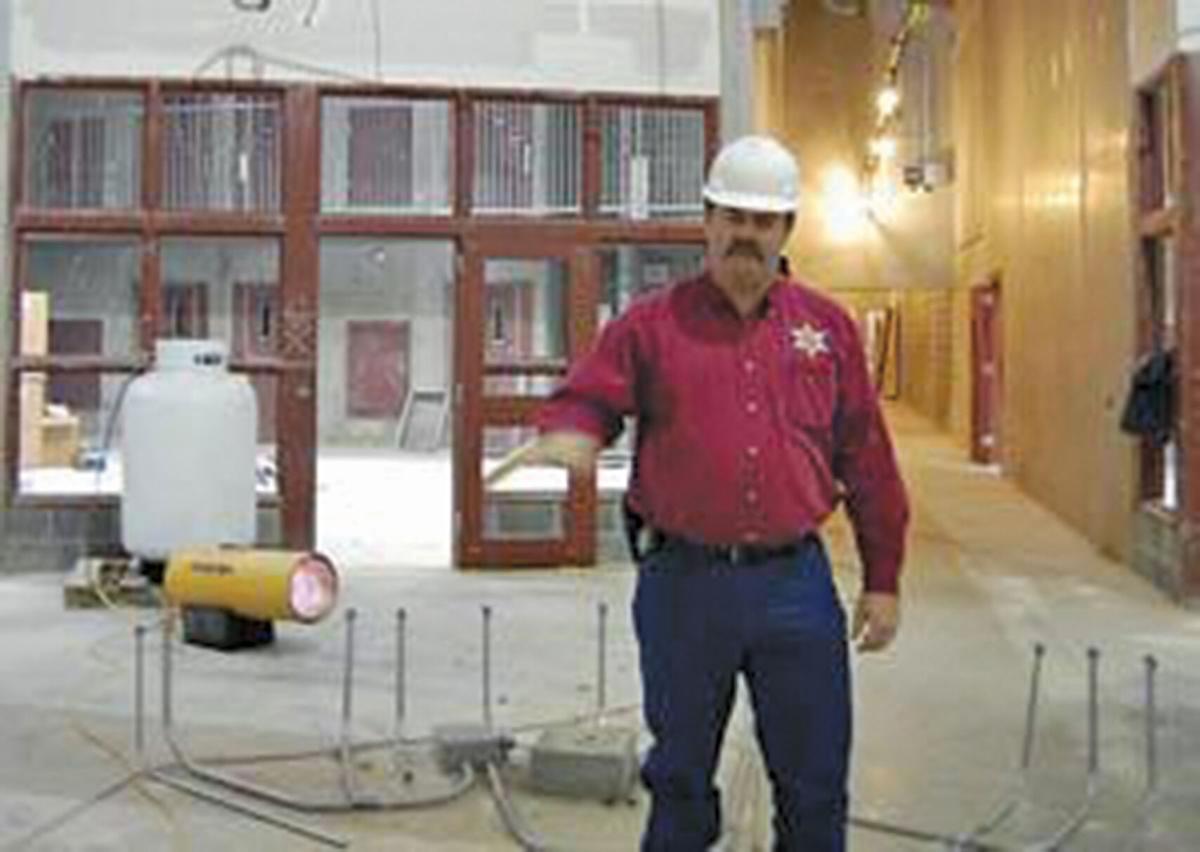 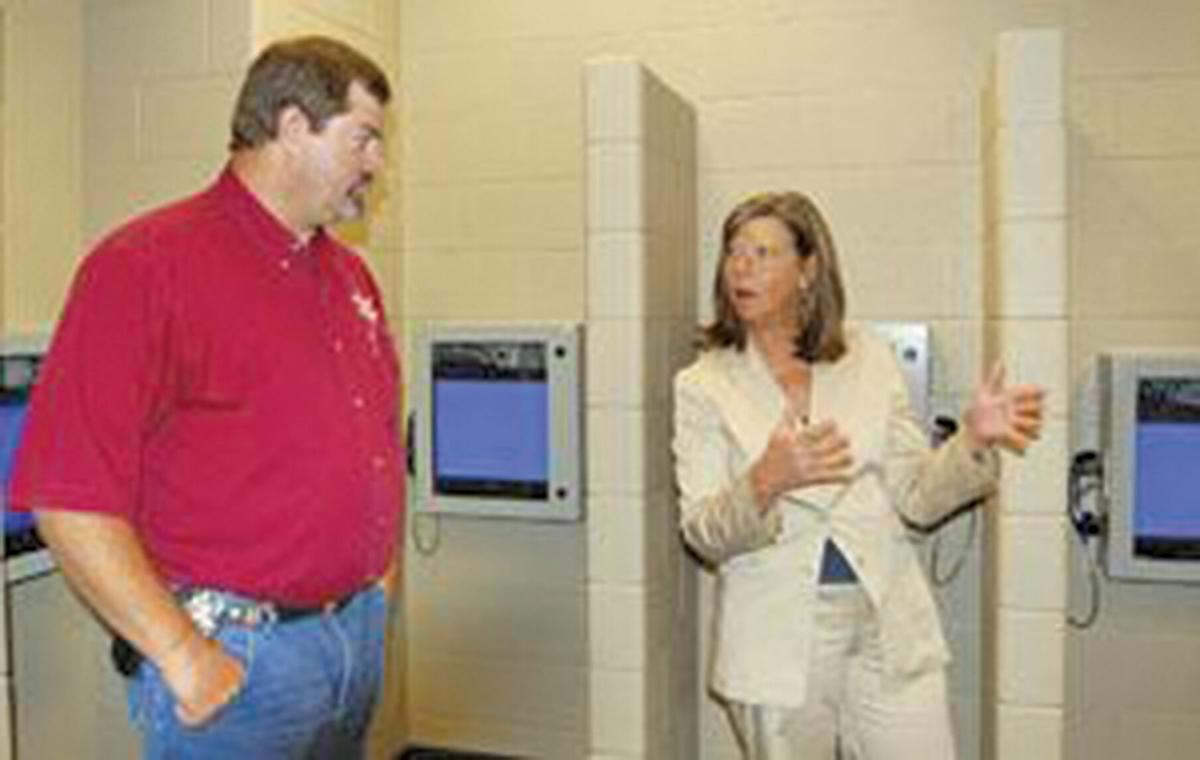 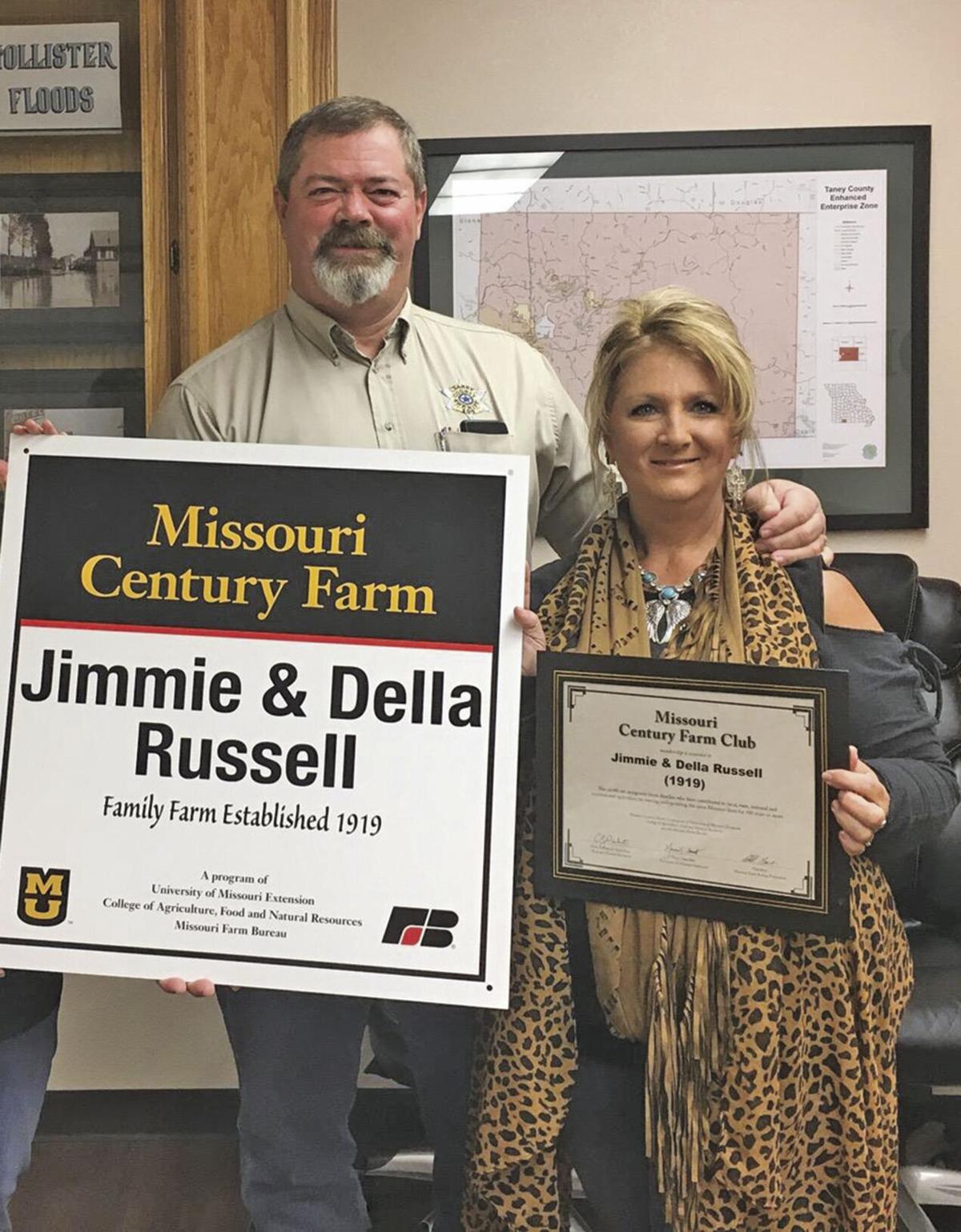 Taney County Sheriff Jimmie Russell and wife Della Russell being recognized as the owners of a Missouri Century Farm.

Jimmie Russell will be retiring at the end of 2020 after 20 years as the Taney County Sheriff.

Taney County Sheriff Jimmie Russell and wife Della Russell being recognized as the owners of a Missouri Century Farm.

After more than three and a half decades in law enforcement, Taney County Sheriff Jimmie Russell is retiring at the end of this month.

Reflecting upon his career and his start in law enforcement, Russell said that, even before becoming an officer of the law, he had been working in a similar, but different, line of work with the Taney County Ambulance District.

“From April 1, of ‘82 I was an EMT and paramedic until June 1, ‘85. During that time, our office was in the basement of the old sheriff’s office, and I got to hang out with a lot of the deputies and stuff back then,” said Russell. “I got interested in the law enforcement side and decided to leave the medical side and go into law enforcement.”

Russell said, from being an EMT, he made his career transition by first becoming an officer with the Branson Police Department.

“In June 1, of ‘85 I started with the Branson Police Department and I worked there at Branson Police until Feb. 1 of ‘92 when I went to the (Taney County) sheriff’s office. I worked at the sheriff’s office for eight years as a deputy,” Russell said. “I started under Sheriff Chuck Keithley and worked a year under him, then Theron Jenkins took over for him when Chuck retired. I worked eight years for Theron. When he decided he was going to retire, then in 2000, I ran for sheriff and won the election and was fortunate enough to become sheriff for 20 years.”

As a life-long resident of the area, Russell said he’s seen a lot of changes in Taney County.

“I grew up here in Taneyville. Went to Taneyville grade school and all through grade school there and then graduated from Forsyth High School. I’ve lived around here all my life. Actually grew up within three miles of where I live now,” said Russell. “When I first started at Branson Police Department in ‘85 our city limits ended just before the Walmart store on 76 highway out there, just east of that is where the city limits ended. There were a few businesses out past there, but not many.”

Russell added that getting into the law enforcement field back when he got started is a lot different than what you have to go through these days.

Compared to now, Russell explained, there were no requirements for continued eduction; however, he took as many of the courses as he could when he was first starting out.

“Back then, the Highway Patrol academy, they had a lot of classes up there, and the city of Branson was really good about sending us to training. I actually went through every class the highway patrol academy had to offer, with the exception of the photography class. I didn’t go through it,” said Russell. “The rest of them, all the supervision classes and all the advance accident investigation and accident reconstruction and the firearms instructions and everything. I went through all of that up there while I was with Branson.”

When it came to deciding to run for Taney County Sheriff, Russell said becoming sheriff had always been a goal of his.

“The first time I think I said that I would like to was during white bass season, and me and (Branson Police Chief) Steve Mefford, we were fishing down below Powersite Dam and Theron Jenkins and a bunch of them were up there fishing, also. They were talking then that Theron was going to be the next sheriff and I remember Steve said, ‘That wouldn’t be anything I would want to do’ and I said, ‘You know, I think one day I may want to do that.’ So it was even a goal from back then, back when I was with Branson. I had it in the back of my mind that is what I wanted to do. So when the opportunity came for me to move over to the sheriff’s office and learn it and everything, I took it.”

Russell added that when Jenkins announced his retirement as sheriff in 2000, he knew then he wanted to run for the position. Russell ran, won and was sworn-in as Taney County Sheriff in 2001. Since then, Russell explained, the job has continued to evolve.

“The first year I was sheriff in 2001 we had the 9/11 attacks, and that brought about a big change in law enforcement then and how we do things, how we looked at things and there was just a whole round of things we had to change and adjust to. Throughout the years, there have been continual adjustments,” Russell said. “My first year we had all that to adjust to, and then my last year we had COVID and the protests to adjust to.”

As he was taking office in 2001, Russell said he also found himself having to bring the sheriff’s department into the 21st Century.

“When I walked into the sheriff’s office, we didn’t have any computers. It was all hand-written reports and everything done by hand. It was just the turn of the times when that needed to be done and just hadn’t been yet,” Russell said. “So we put in new computer systems and records management systems, jail management systems and everything, including computer-aided dispatch for them.”

In his time as sheriff, Russell said he’s had the chance to accomplish many things, but one of his proudest moments has been the creation and completion of the Taney County Judicial Center.

“Whenever I came into office, they had already taken and made plans for a new facility. Actually the county had spent $1 million on the plans and getting everything going, and it was going to be a 100 bed facility. At that point, whenever I took over, we were already at 120 inmates. I said, ‘You know this is supposed to be a long-term facility that you’re planning. This is not going to work. We’re already past the pool limit,’” said Russell. “Of course the plans then involved tearing down the old courthouse to build this one, which is not actually what the commission wanted. That’s the way the architects and everybody developed it. So long story short, we ended up scrapping a $1 million plan and starting all over and redesigning an all-different location and going through that. So in 2008, we finally got the current facility built.”

While in office, Russell said he was also proud of his time working with the Military Order of the Purple Heart.

“I worked with them on the ‘Hand in Hand’ (event) in Branson and everything. That was a great highlight in my career, being able to work with those people,” he said. “I met a lot of very interesting people during that and made a lot of really good friends through that.”

Russell said one of the final things he was glad to see through during his final months in office was this year’s passing of the Law Enforcement Sales Tax increase. After serving the residents of Taney County for two decades as sheriff, Russell said he knew it was time to retire.

“They always say you know when it’s time, and it’s time. After 20 years, of course. My wife, she’s retired now, and we want to chase our grandkids around the rodeos and basketball games and all that and be a little freer to do that stuff,” said Russell. “I’m just ready to settle down and farm and not be called out in the middle of the night and everything else. I’ve been in law enforcement for 35-and-a-half years now, and that’s long enough for anybody.”

Russell added that it was also important to him that he and Chuck Keithley are now tied for the longest serving sheriffs in Taney County history, both serving 20 years in office.

“Anybody coming in. I don’t care who it is, me or Brad or anybody else coming into that position, there will be a lot that they realize they have to learn. He’s been going to school to learn, and it’s opened his eyes to what all there is. Even being chief deputy, he knew a lot of it, but there’s still stuff that he has to learn,” said Russell. “He’s very level-headed. He’s the right man for the job. He’ll do real well. He’s going to have Matt Wheeler as his chief deputy, and that’s an excellent choice. They’ll be a great team.”

Russell said doing this job as long as he has wouldn’t have been possible without the support of his family.

“Having my family behind me, especially my wife. You know the family goes through a lot whenever you’re sheriff, too. It’s probably been harder on them than it’s been on me. But having them there to support me and be behind me with it, means a lot.”

May your retirement last another 20 years! God Bless you!