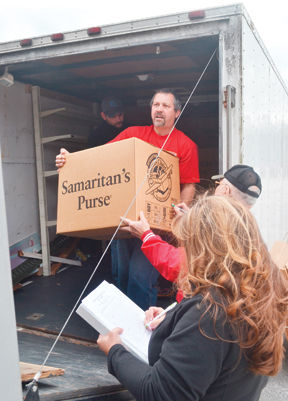 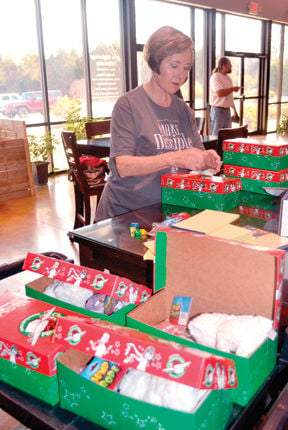 From Branson to Forsyth and Kimberling City, Operation Christmas Child is underway as the spirit of giving takes center stage.

Collection week runs through Nov. 23, and Branson-area families, churches and groups have busied themselves packing gifts into shoeboxes for children around the world.

Operation Christmas  Child is a project of Samaritan’s Purse, an international Christian relief and evangelism organization headed by Franklin Graham.

According to a press release, the project has delivered shoebox gifts to more than 124 million children in over 150 countries and territories since 1993. The organization will deliver the gifts to children in other nations again this year.

Local media coordinator Linda LeNeve is a full-time volunteer who is having a ball,  literally, in doing her job.

She recommends including an uninflated soccer ball with a needle in a gift box, saying the sport is universally recognized.

“All over the world, kids know what a soccer ball is,” LeNeve said, adding, “I help with packing parties all the time.”

LeNeve said contributions are coming in from various sources and through different means.

Chick-fil-A opened a franchise in Branson in March, and franchised restaurant operator Kevin Hutcheson wasted little time in getting involved in the community.

LeNeve said Hutcheson have been involved with Operation Christmas Child through his Springfield franchise and stepped forward to help in Branson.

Operation Christmas Child gave the Branson Chick-fil-A 100 boxes, and the first 100 people who came in and got a box got a free breakfast.

“He wanted to help with our community, so that’s what they did,” LeNeve said. “Kevin Hutcheson, he’s the one who made that deal. He’s just a very giving man.”

“More and more people are getting involved. It’s very exciting.

“Gifts are delivered  by camels, by elephants and by canoes, all of these things. Samaritan’s Purse is a well-oiled machine,” LeNeve said.

“They don’t have a thing. Many of them live in orphanages or garbage dumps. It’s like going on a mission’s trip without ever leaving home.”

Every age group can participate, and LeNeve said recent donations from Peace Lutheran Church ranged from a 7-year-old child to a 90-year-old person packing a shoebox with gifts.

“We are not just giving toys and needed items to those in need, we are changing lives by bringing them the Gospel of Jesus Christ.

“Alex’s entire family (except him) was killed during the Rwandan genocide in the mid-1990s. Alex was only 6 years old at the time. He escaped being killed several times and ended up in an orphanage. The next year, he received a shoebox from OCC, which brought him great joy. His most prized possession was a brush/comb combination he carried with him for the next three years. Alex was brought to Christ through that shoebox. That single box changed him forever. He said it took him years to realize how God had been working in his life, keeping him safe and providing him with a new adoptive family in the United States when he was 15.”

“We have so much to be thankful for here in America. Most of us have a roof over our heads, beds with pillows to sleep on an food on our table. But for many children living overseas, tough living conditions and extreme poverty have  left them with little hope,” Qualls said. “It is amazing to see the joy on the children’s faces when they receive these gifts.”

Those who wish to participate still have time. LeNeve said there are things not to include, such as liquid or torn items.

“Hard candies are great. Toys, fuzzy animals are always good things to put in,” she said.

For guidelines, go to samaritanspurse.org/occ.

The main collection center in the area is located at New Beginnings Fellowship Church, 151 Elm Street in Hollister. From Business 65 turn left on 1st street, then left on Elm street to the church entrance.

The collection center is open from 10 a.m. to 4 p.m. Saturday and from 1-4 p.m. Sunday. The final day to drop off shoebox gifts is Monday from noon to 4 p.m.

Donors are asked to include $7 with the gift box for shipping. LeNeve said a neat feature of the project is the $7 can be paid online, which allows donors to print off a label and they can track their box as it is shipped.