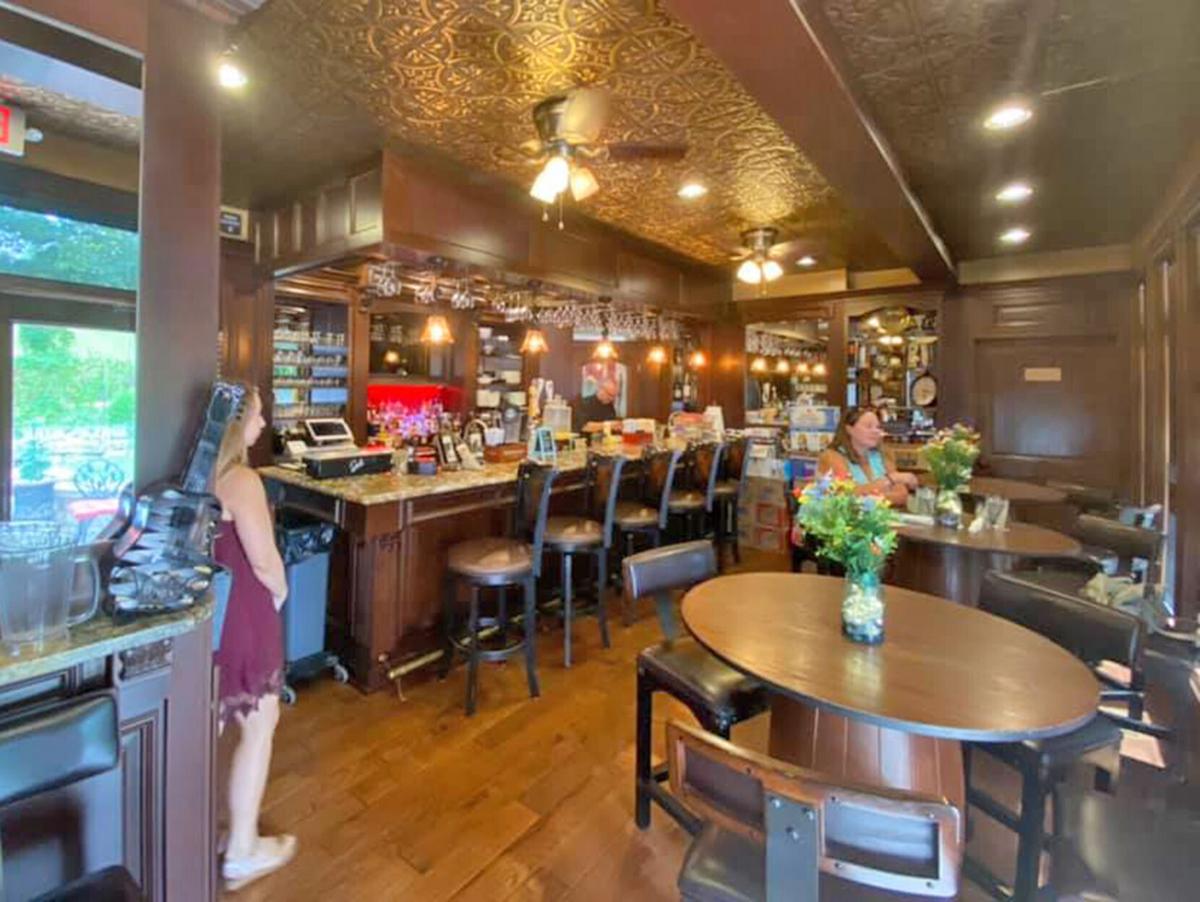 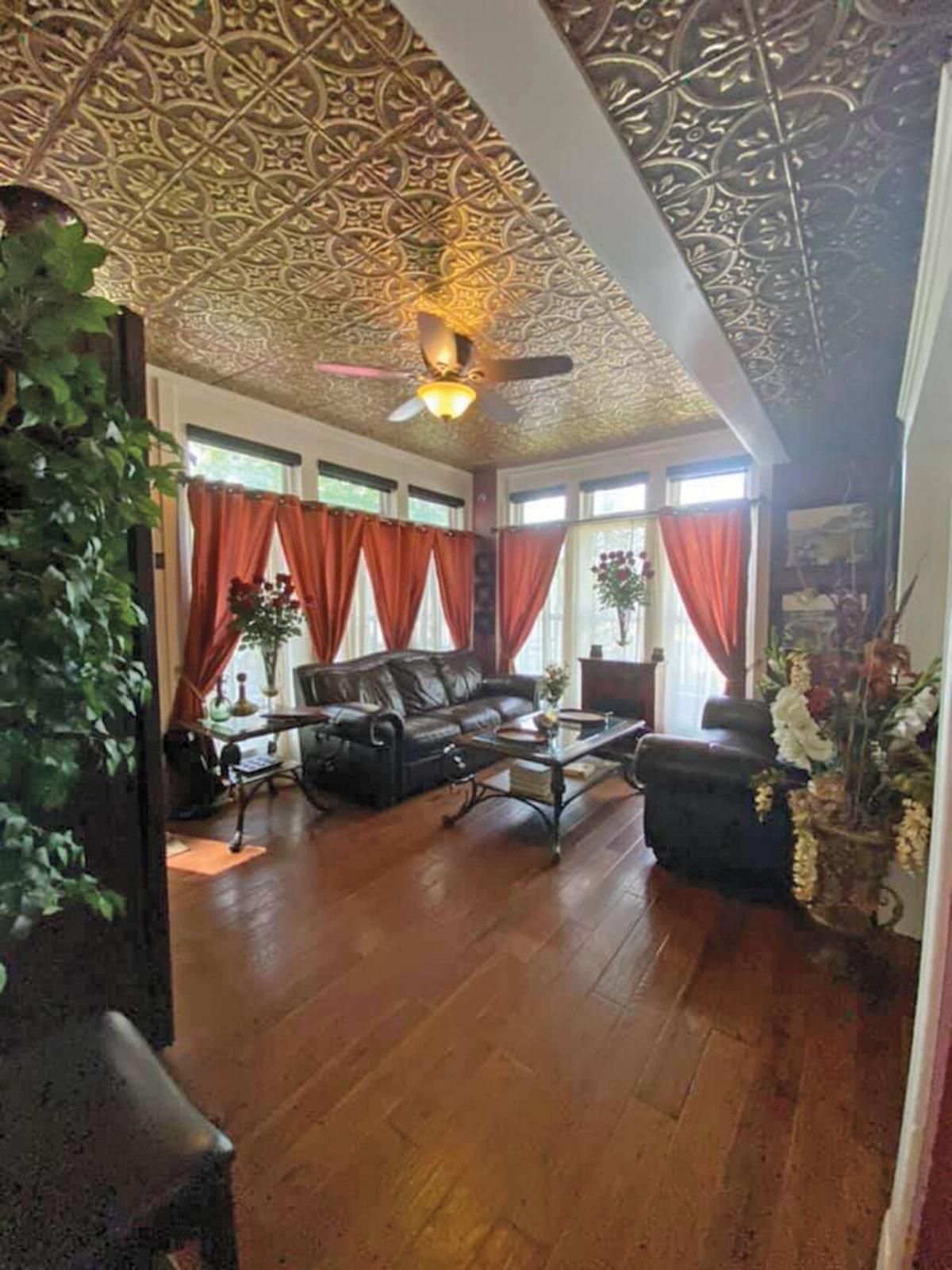 Capone’s Speakeasy is located inside The Branson Hotel and is filled with charm, beauty and nostalgia. 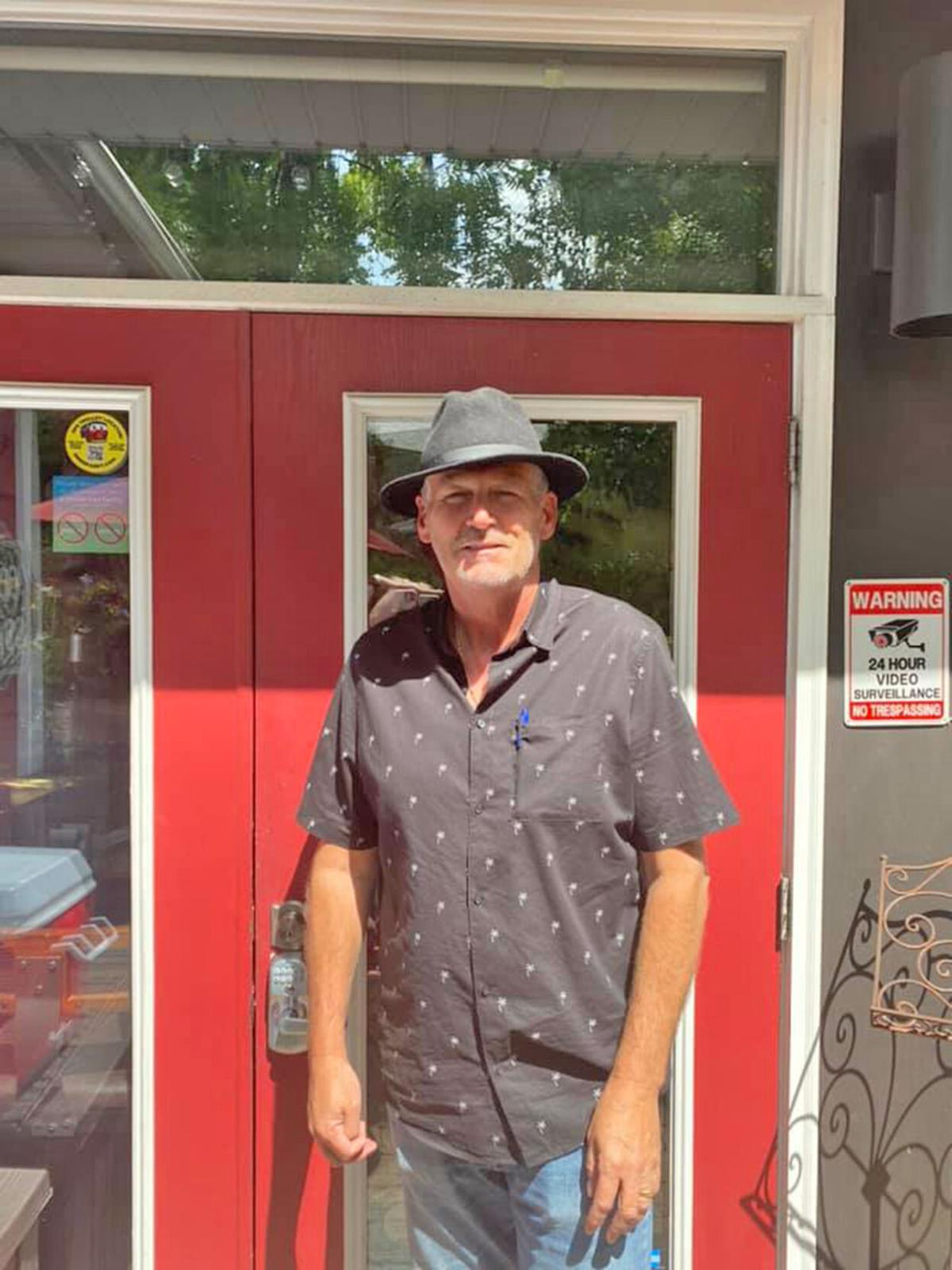 Perry Garrett, owner of Capone’s Speakeasy, has been in the restaurant and food industry his whole life and is fulfilling his dream of owning a unique bar and lounge in Branson. 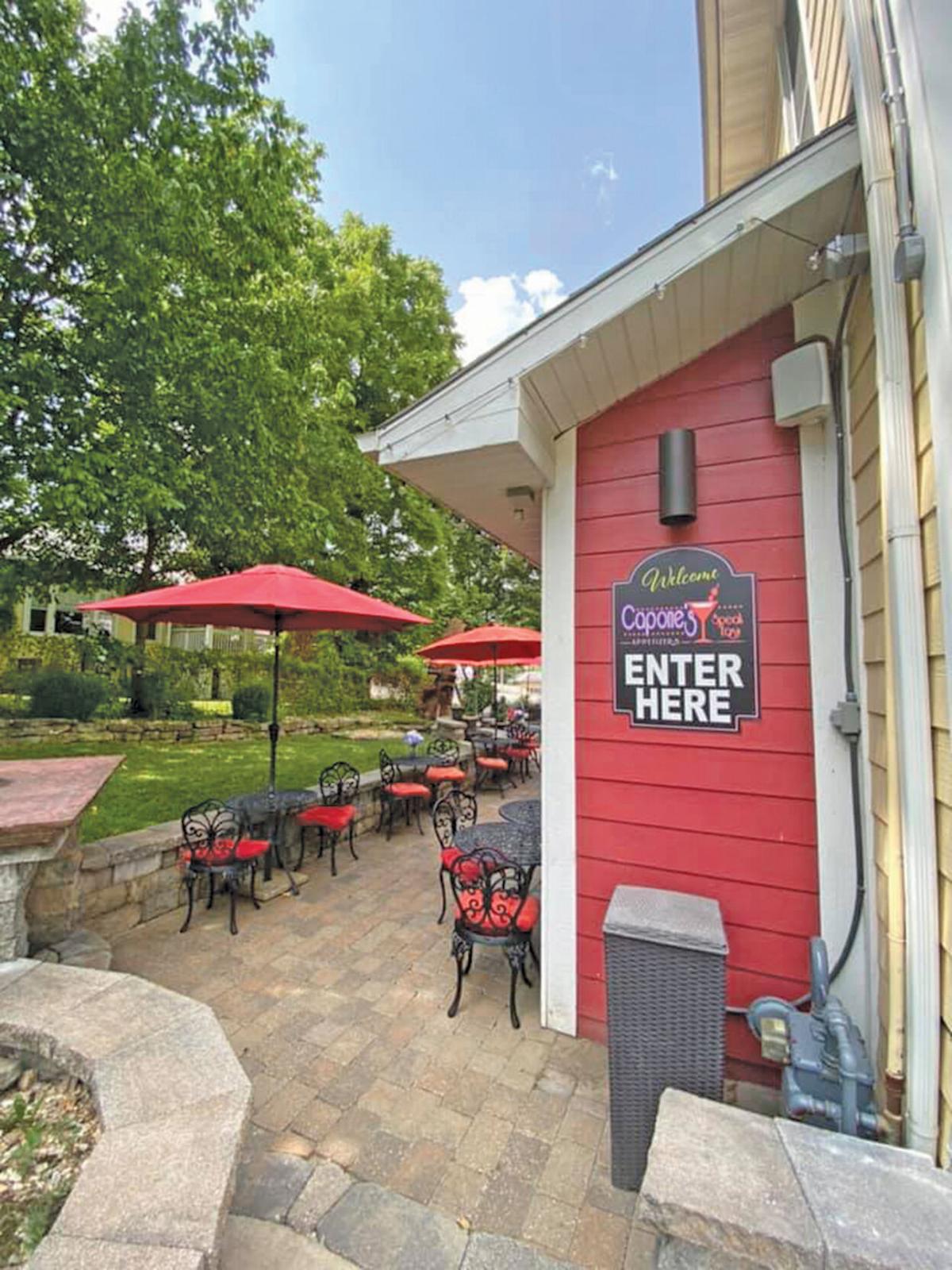 Capone’s Speakeasy is open Monday through Saturday from 3 p.m. to 10 p.m., located at 214 West Main Street in Branson.

Capone’s Speakeasy is located inside The Branson Hotel and is filled with charm, beauty and nostalgia.

Perry Garrett, owner of Capone’s Speakeasy, has been in the restaurant and food industry his whole life and is fulfilling his dream of owning a unique bar and lounge in Branson.

Capone’s Speakeasy is open Monday through Saturday from 3 p.m. to 10 p.m., located at 214 West Main Street in Branson.

There’s no prohibition of fun at Branson’s newest lounge.

Capone’s Speakeasy, located at The Branson Hotel, at 214 West Main Street, is bringing gourmet appetizers, professionally mixed drinks and a new local spot to hang out.

The speakeasy had its grand opening on Wednesday, July 7, and has been thriving ever since. It is open Monday through Saturday from 3 to 10 p.m.

Perry Garrett, owner, hopes his new business will become a spot loved by both tourists and locals.

“I loved the idea that this place is special, it’s different. I don’t really see this as a bar. I see this as more of a gathering place for locals and tourists that want to stop in and enjoy something different and unique,” Garrett said. “I wanted something with character and charm, and something I could enjoy and make special. That’s what this place does.”

Garrett has been in the food and restaurant industry for the majority of his life and served as a food inspector in the Army.

“About 25 years ago, I had a place in Ozark called the Train Station Restaurant, and it was in a 1927 railroad passenger car. I had that for four years, and I shut it down in 2001 because my kids were still at home and in school,” Garrett said. “So, here it is 20 years later, and I saw The Branson Hotel was for sale. I started looking at it, but because of COVID last year, it caused a lot of problems, so I redirected myself to leasing the bar.”

Garrett said he has dreamed of owning something like this speakeasy since his time in the army, and loves nostalgia, fitting in perfectly with the theme of a speakeasy.

“I would sit down at night, I was thinking, ‘Well when I get out of the army, what do I want to do?’ So I went back to my first passion, the food industry,” Garrett said. “I actually had someone sit down and draw a big diagram of the entire restaurant, the floor plans, the entertainment state, it was a whole deal.

“Then while I was still in the army I was doing consulting work for restaurants, so that was always in the back of my mind. I knew that one day I would do something again, and this place fit the bill perfectly. It’s just a charming, charming place, and it’s got nostalgia.”

Garrett has had the property since September, but the work to open hasn’t actually taken that long. Rather, Garrett said he struggled with the decision to open it for months.

“I kept actually trying to talk myself out of it. I had a good paying job that I had been in for the last 18 years, I was doing quite well,” Garrett said. “I am 59-years-old, turning 60 next month, so it was kind of a scary proposition at this point in my life to give up something that was lucrative to pursue a dream that I had 20 years ago.”

After pushing through the hesitation, Garrett said he finally decided to open the speakeasy as he felt this was what he was supposed to do. The process of opening was easy, thanks to the work the hotel owner had already done to make the bar beautiful.

“It was (also) waiting until we got past the COVID scare, and then getting into this year, I really started looking at it more. I just kept getting a lot of signs and things telling me to go forward and do it, and finally everything worked out and here we are,” Garrett said. “It was already set up. The owner, she did a wonderful job on this place, it is absolutely beautiful. I wish that I could take credit for it, but I can’t. She did a marvelous job with it.”

Casey Southern, the speakeasy’s chef, is a classically trained chef at a culinary school in Las Vegas. Garrett said Southern has worked for several of the big hotels in Las Vegas and even owned his own restaurant. Southern and Garrett created the menu for the speakeasy together.

Sandy Matute is the speakeasy’s mixologist, with eight years of experience in making alcoholic beverages and hand crafting specialty drinks.

“She’s fantastic. I mean she can make anything from scratch … to capture our clients’ tastes,” Garrett said.

Some of the popular drinks they serve are their house cocktail called the Al Capone, original speakeasy drinks, wines, draft beers and more.

Monday through Friday Capone’s Speakeasy has a happy hour from 3 to 6 p.m. All drinks are $1 off and $2.50 off appetizers.

Garrett said since opening he has received great feedback from the community. He said they haven’t met their max capacity, but as word gets out he said he is hopeful that business will pick up greatly.

“I’ve gotten nothing but a phenomenal following. You would think that (in) a big tourist town, it might run people (off) a little bit, but the people in this town are actually amazing,” Garrett said. “I see so many people reaching out, telling other people, having a good positive mindset and I think everyone is just glad to see it busy in the town.”

Being so close to downtown Branson has also proven to be an advantage to the speakeasy, as people sit in traffic at the stoplight on Main Street and Veterans Boulevard.

“Because of the traffic light right here, people are backed up and they look over and see it. I might not get the people passing by, but it helps bring them in once they’ve had a chance to be in Branson,” Garrett said. “(Then they) say ‘Hey remember that cute little place, let’s go check that out.’ We do get a lot of tourists stop in, but we’ve had a bunch of phenomenal locals that have already been in.”

To keep in tradition, Garrett said he offers a 10.85 % discount to locals because Al Capone never paid taxes himself.

“(Locals) have to pay the full tourism tax, they’re paying 10.85 percent. I’m basically offsetting that,” Garrett said. “Al Capone did not pay taxes obviously, but I still have to pay the taxes. But it’s a good little play on the concept of a speakeasy.”

The 10.85 % discount is also offered to all first responders, police, veterans and active duty military.