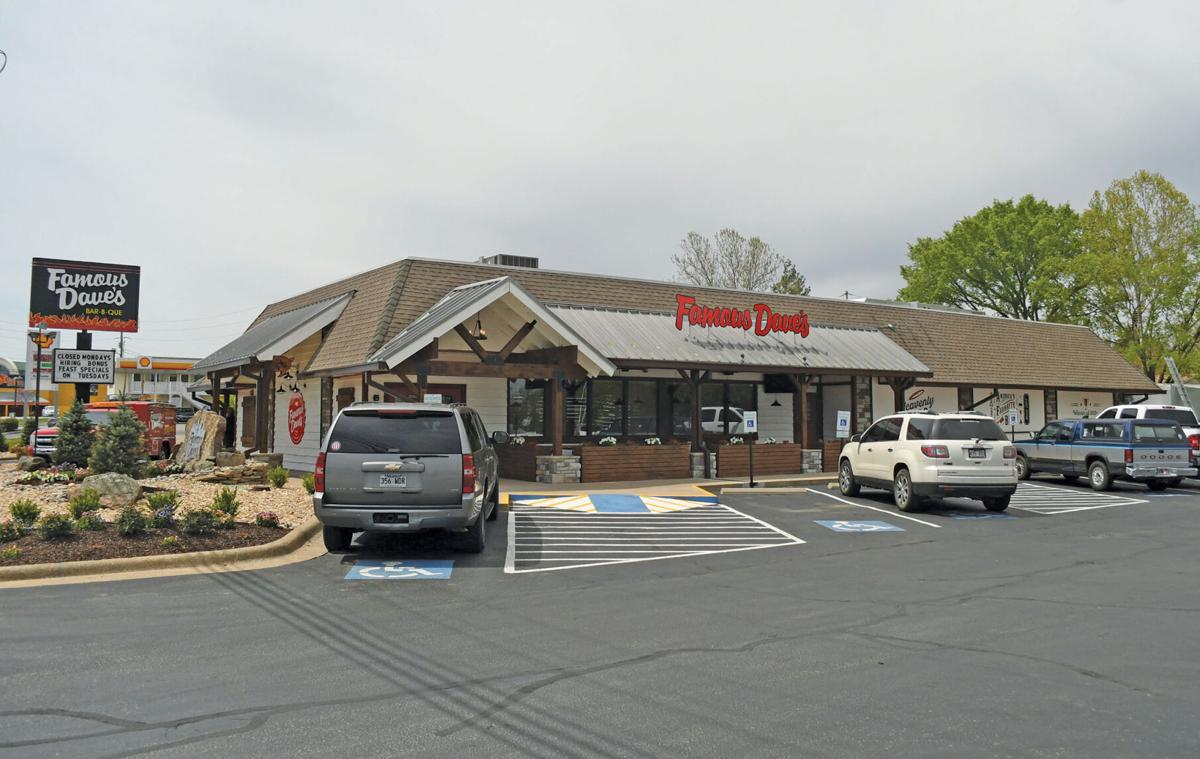 Moving from the Branson Landing to the 76 Strip, Famous Dave’s new restaurant is located at 1855 W. 76 Country Blvd. 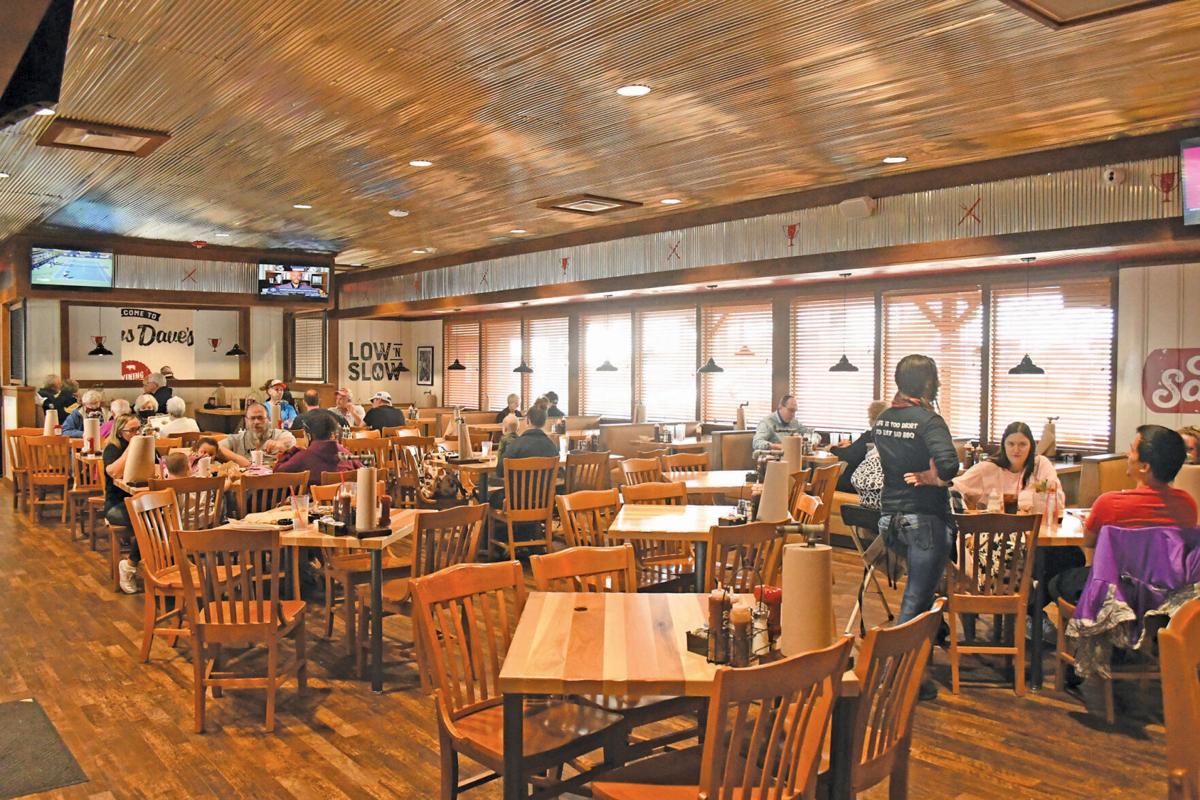 The inside of the new Famous Dave’s sports a new farmhouse theme, opposed to the former Ozarks lodge look. 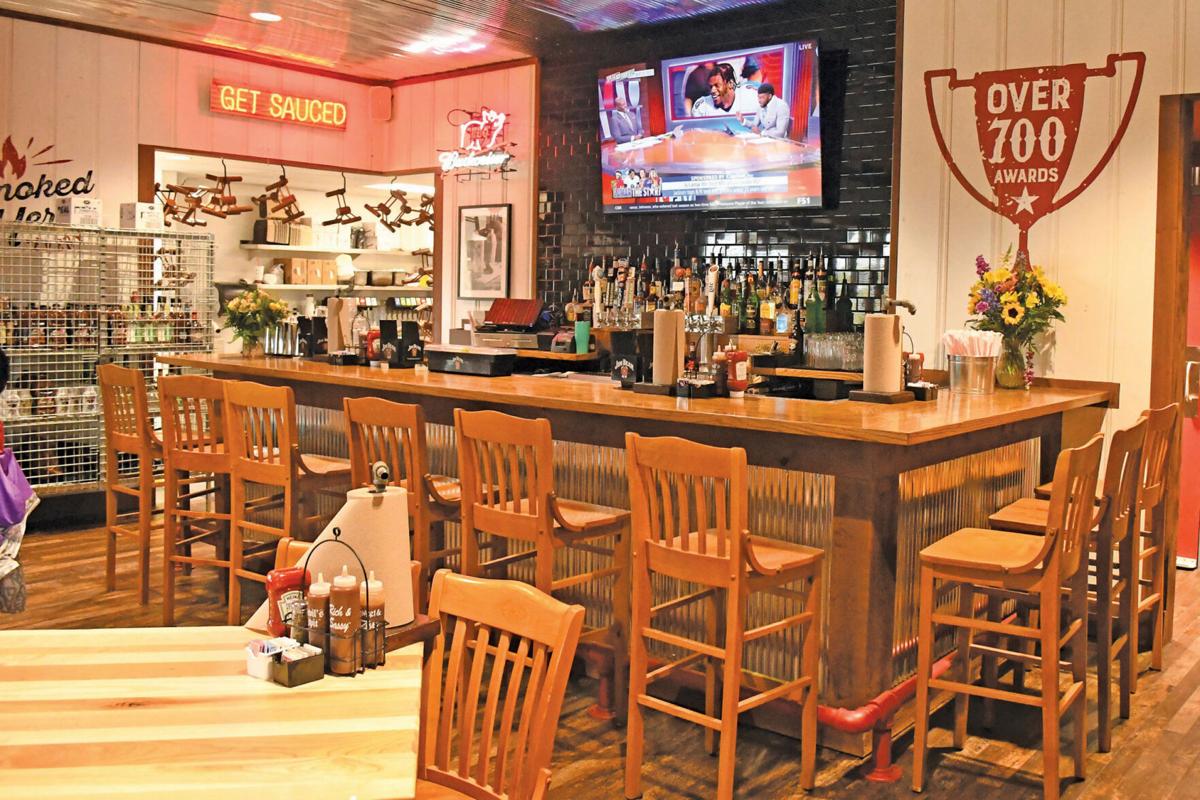 The new Famous Dave’s location in Branson features mutliple tables, booths and a bar and front of the restaurant. 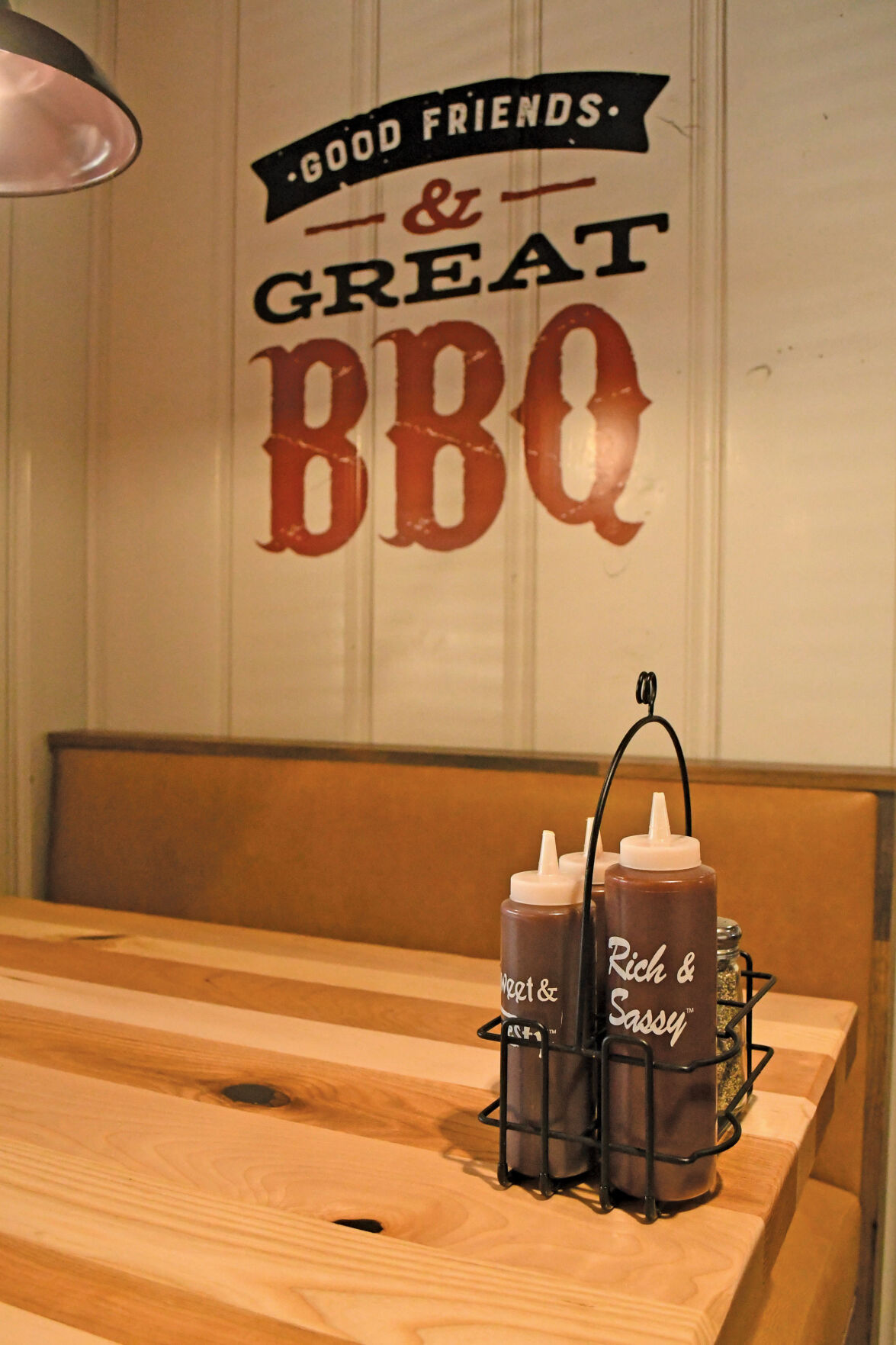 Branson Famous Dave’s Owner Dave Jones said the move to the 76 Strip was not pandemic related, but the past year did help him decide on the smaller location. 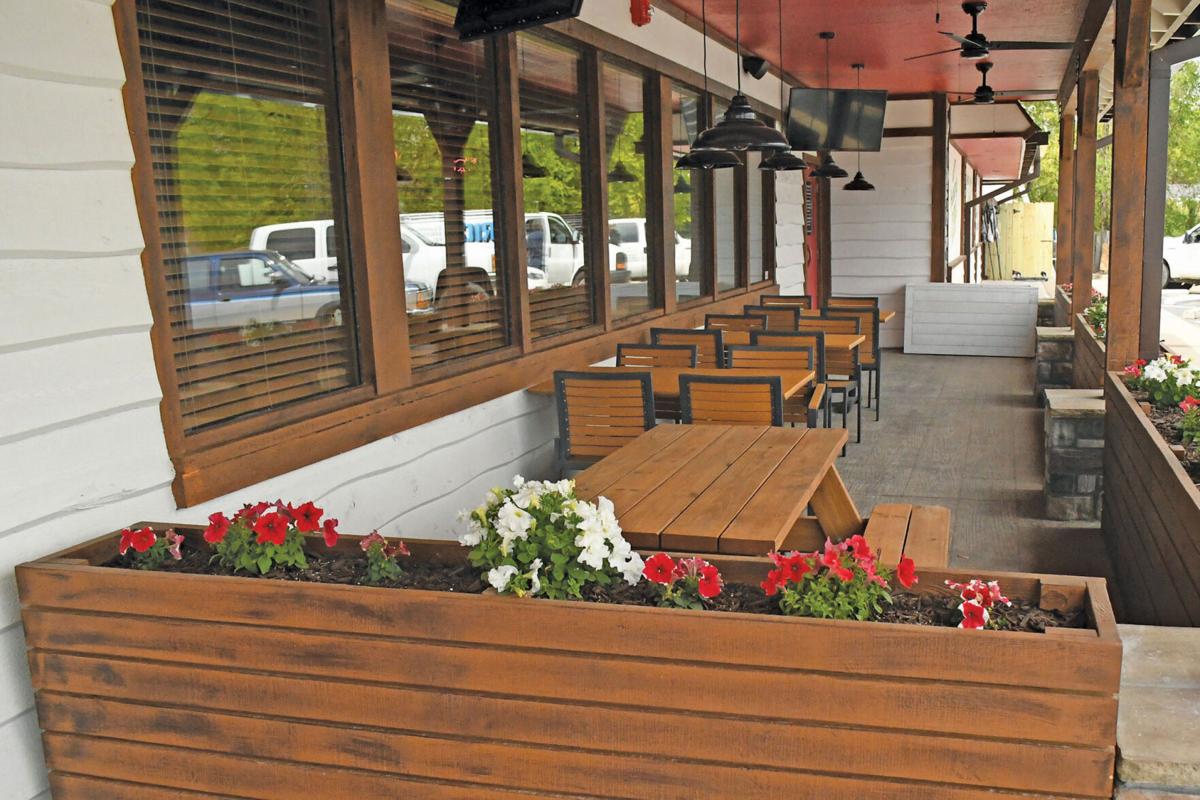 Just like to location at the Branson Landing, the new Famous Dave’s includes outdoor dining options.

Moving from the Branson Landing to the 76 Strip, Famous Dave’s new restaurant is located at 1855 W. 76 Country Blvd.

The inside of the new Famous Dave’s sports a new farmhouse theme, opposed to the former Ozarks lodge look.

The new Famous Dave’s location in Branson features mutliple tables, booths and a bar and front of the restaurant.

Branson Famous Dave’s Owner Dave Jones said the move to the 76 Strip was not pandemic related, but the past year did help him decide on the smaller location.

Just like to location at the Branson Landing, the new Famous Dave’s includes outdoor dining options.

After nearly 15 years at the Branson Landing, Famous Dave’s has moved to a new location in Branson.

On Monday, April 12, Famous Dave’s opened the doors to patrons at its new restaurant at 1855 W. 76 Country Blvd. in Branson, formally the home of Rib Crib.

Branson Famous Dave’s Owner Dave Jones said there were several things that ultimately led him to make the move.

“When we went to the landing 15 years ago, we were actually the only restaurant that opened up day one. It was only Famous Dave’s opening up on May 26, 2006 and there was only going to be eight restaurants down there. That’s what the rendering showed,” said Jones. “There’s a lot of restaurants now, but the same amount of foot traffic. To be politically correct there’s just not enough butts to fill all the seats down there in those restaurants.”

“The weather has to be perfect for it to work out down there (at the Branson Landing). With rain, with temperatures, cold weather in the winter time, so we were just ready for a change. The landing was good to us, don’t get me wrong. I was grateful,” said Jones. “As you know, many restaurants come and go down there and there’s been a revolving door and we were there the whole 15 years from day one. It’s just we’re ready for a new chapter, for a new business model for me and a new chapter for the next 15 years in Branson. It just needed to be away from the landing to make that work for us.”

Not only is the Branson Famous Dave’s at a new location, but it’s also sporting a new interior look.

“The landing look was a lodge theme, which fits the Ozarks great. We kind of went with a new Famous Dave’s test that they’re doing on a national level. This is the first one in the United States that’s 100% farmhouse themed,” said Jones. “It’s just a fresher, cleaner look. There’s not as much décor hanging on the walls and what not. We’re just excited to share the investment we’ve put in here and it’s still the same, great, award winning food, just with a different look now and easier accessibility.”

Due to their new convenient location, Jones said they’re also able to offer better options to their patrons who don’t wish to dine-in.

“We have a beautiful to-go area. It’s very easy for people to come right up and order food. We have curbside as well,” said Jones. “We’ll run it out to their vehicle. It’s just a nice addition for people to not have to get out of the car.”

Jones added that with the move, he hopes to increase the amount of to-go orders coming through his restaurant.

“The national average of all the Famous Dave’s is about 38% and the stores I own in Kansas and Nebraska are around that 40% mark,” said Jones. “The landing was 2% to-go, so I’m excited to have that extra revenue stream and to let guests enjoy what we’re able to offer people in other markets now.”

While many have been under the impression that the jump from the Branson Landing to the 76 Strip was due to the pandemic, Jones said that actually wasn’t the case.

When he initially began looking at new places, Jones shared that at one time plans were in place to move Famous Dave’s into one of Branson’s other outdoor shopping centers.

“I was actually going to go to Tanger Outlet mall and be the first restaurant at Tanger. The only thing that kind of changed due to the pandemic was I don’t need a big box restaurant anymore,” said Jones. “I did look at a different model. I was leaving no matter what, but I just looked at doing a smaller footprint, so maybe the pandemic changed my point of view on that, on the smaller footprint.”

Jones added that right now he easily could hire between 30 to 40 more employees, but the lack of available employees was his No. 1 reason for wanting a smaller location.

“Right now, it’s impossible to get staff. Trying to staff a 7,000 to 8,000 square foot restaurant isn’t fair to the guests. People go out to eat in Branson now and they’re waiting an hour to an hour and a half in restaurants, because there’s only two or three employees staffed in the place,” said Jones. “Trying to manage that, trying to make guests happy and trying not to burnout your staff, this was the best direction to go, because there’s so many unforeseen things that can happen in the future with the pandemic.”

With the arrival of this new location, Jones said starting this month he’s begun experimenting with new operating hours.

“We’re actually going to start closing on Mondays and that’s a blessing. Not on my checkbook obviously, but it’s a blessing for being away from the landing and being able to make those chooses now. Our staff needs a break. The ones working right now and not collecting the free (unemployment) money are the ones being punished. It’s just going to be a day off for people to check out and have time with their family. That’s what’s important to me, is quality of life, so we are going to do that for a month,” said Jones. “I’m actually doing that with all of my restaurants in the Midwest and I know of other national brands that are starting to do that same thing.”

“I haven’t been this excited about a new location in a long time. I’m very grateful we were able to navigate through this during the pandemic,” said Jones. “Most people are closing businesses and we’re investing back into the business, so I’m grateful for that. I’m grateful to our guests who have kept us going and hopeful everybody enjoys this new location.”

For additional information or to order food online visit famousdaves.com.