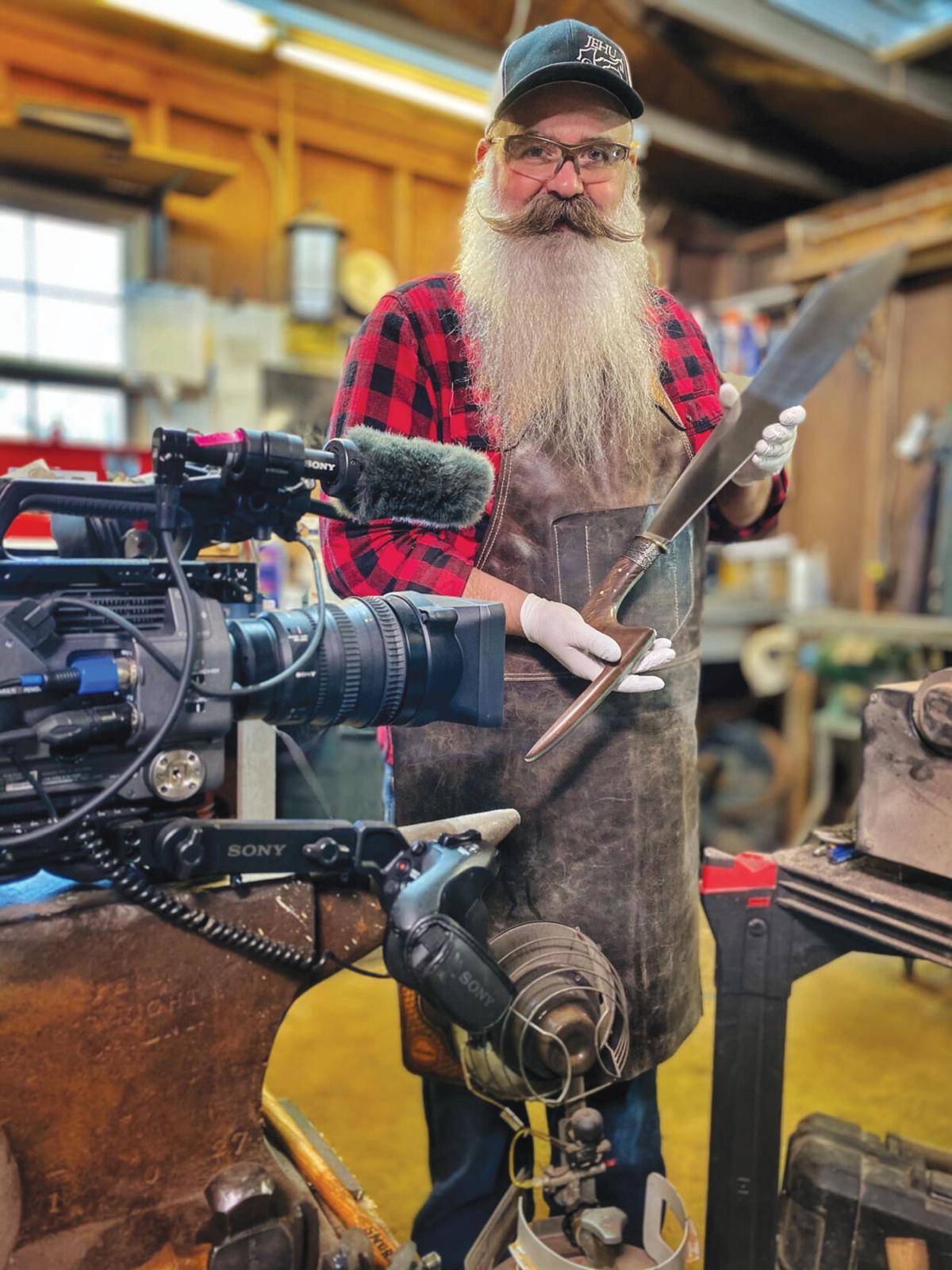 Davy Wilson being filmed for Forged in Fire with his pira sword. 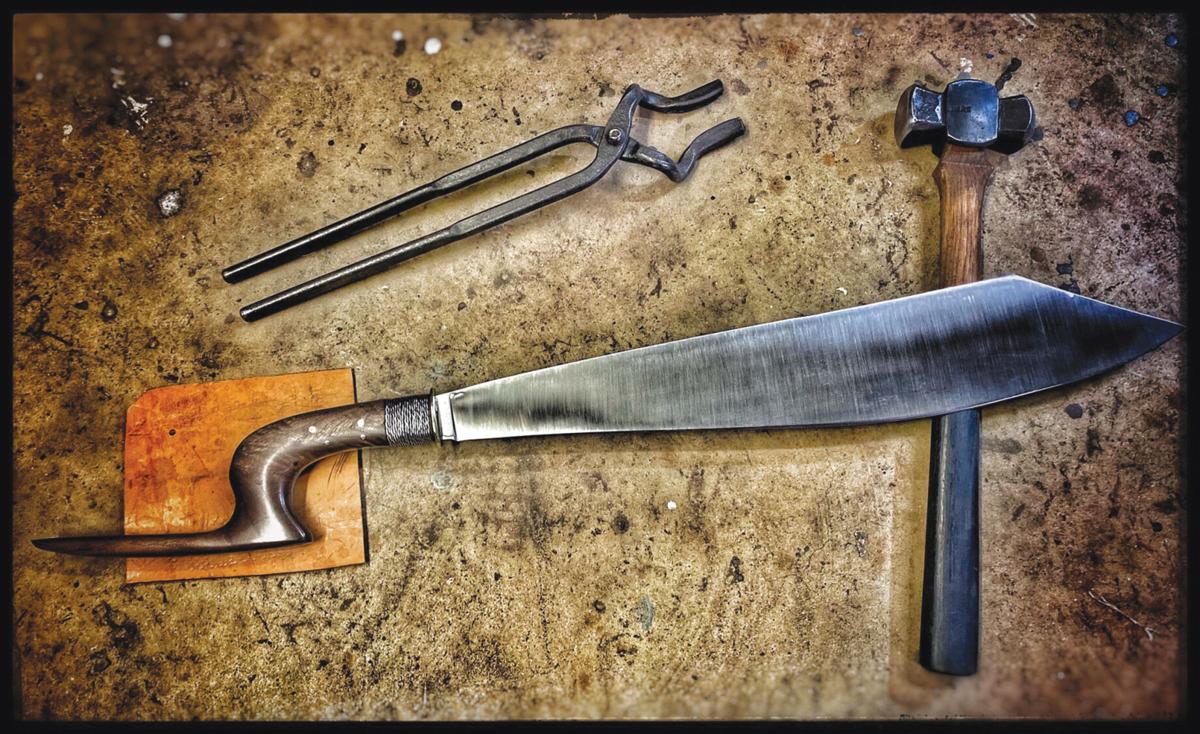 Davy Wilson being filmed for Forged in Fire with his pira sword.

The process to get on the show was a long one, according to Wilson. It started in 2019 when he was encouraged to apply by local knifemaker Joe Smith, who owns Silver Anvil Metal Craft in Branson.

“I have taken a few advanced knife smithing classes from Joe. He told me that I really should be on the show,” said Wilson. “I have been a fan of the show since 2015. I watched it and in the back of my mind I always thought man that would be cool. But I thought, I am not what they are wanting. But Joe told me I was exactly what they wanted, not a full time blacksmith or bladesmith. Just more of a regular guy out here making knives.”

Wilson said he found a link online and applied.

“I logged in and filled out an application,” said Wilson. “I sent them an email to throw my name in the hat. That was in October of 2019.”

Over the next few weeks Wilson said there was an extensive interview process, including  phone interviews and a video interview. Wilson said production asked many questions about his knife building and what he thought was his strong points.

“I told them my fit and finish,” said Wilson. “I want everything to come together and fit like a hand to glove. I want the feel of the knife in your hand to feel like a good handshake. If someone is going to spend hundreds of dollars on a knife I want every time they grab it that they are tickled with what they have.”

According to WIlson, his final interview in the application process was at the end of February 2020.

“I did the Skype interview,” said Wilson. “I have never used Skype before or interviewed for a TV show before so that was an odd mix. My daughter, Faith, was attending college at the time and she showed me how to use Skype. When the interview was over I told Faith that the interview went horrible, I’m not what they want. They had emailed me back while I was talking to her and said that they wanted me on the show. I was caught so off guard.”

Wilson agreed to be on the show and then the pandemic hit and production was shut down.

“I was told to be patient and hold on,” said Wilson. “That’s what I did and in October 2020 they contacted me. They were back up and shooting and asked if I was still interested. I said, ‘Yeah, I would love to do it.’ It sounded like so much fun.”

According to Wilson, the competition show is composed of three rounds, where four bladesmiths are challenged to forge swords that are tested by the three judges. The first three rounds are in the studio where competitors create a blade in an allotted time that must pass two tests. Each episode has an overall theme to the challenge. The challenge set forth for Wilson and his fellow competitors in this episode was ‘Mystery’.

“I remember standing there and I started a nervous laughter,” said Wilson. “I was kind of shell shocked in the opener scene. I was standing there and thought this sucks. I could not think of a harder challenge. They put ten identical rounds in front of us on the anvil and told us to pick a hardened steel and a mild steel to create damascus called san mia. Then they turned around and told us you don’t get to have a clock during this round. I actually put it out there and said that’s just dirty.”

Wilson said that the mystery challenges played on competitor’s minds. The nerves get you and it’s your ability to handle the nerves that determined how far you got.

“The truth is this competition is not indicative of the kind of work bladesmiths put out on a regular basis,” said Wilson. “I will spend 30-40 hours making a knife at home (to) get it just right. In the show you are timed. You have to be able to do your best in a compact amount of time. If you can’t handle that pressure you are not going to turn out. On the show it is almost like you have little control over what’s going to happen.”

According to Wilson, he had to start over half way through round one because his nerves got the best of him and he forgot a step.

“When I realized what I had done, I started all over,” said Wilson. “I didn’t know how much time was left, and I was pretty frustrated. They didn’t show that on the show. I was leaning on the table, I just stopped and prayed right there on the floor. I forgot I had a mic on and I said ‘Jesus see what I just done here. I could really really use some help. Cause I am failing and this is falling apart. Lord, I really need some help here.’ I heard the camera man tell someone ‘Davy is okay. I think he is talking to God.’ I talked to God a lot more through that day.”

Wilson made it through the two elimination rounds with his san mai blade and was onto the finale where he and his opponent were sent home to create a pira sword.

“The finale weapon was the pira and I got to actually spend time on it,” said Wilson. “I had an idea of how I wanted to do that swoopy handle. I had a piece of walnut from my grandparents’ farm in Douglas County. When I saw the shape of the (pira) handle I knew that walnut would really work to my advantage. My saw jammed up everytime I would try to make a cut on that chunk of wood. The wood would close up behind my blade and bind my saw with it having all that crazy grain in it. It gets really tight and gets interwoven. I was fighting with the saw for an hour and a half trying to get that wood cut. If I could have got my chainsaw started I would have taken it outside and cut it with a chainsaw. It was brutal.”

During the finale’s KEAL test, Wilson said that he almost wrote his concession speech because his opponent’s sword did such an effortless job, while his sword got hung up while trying to cut through the pig carcass.

“My pira got hung up because the geometry of the grind was different and the thickness of my spine was heavier,” said Wilson. “I went back to the trailer before the strength test and thought about the poor performance of my blade. I was going through what I was going to say and was trying to work through my emotions. Then all the sudden a strong feeling came over me and I heard ‘It’s not over. It’s not done he’s not won. You need to hang in there. Stop writing your concessions speech cause you are not going to use it.’ I sat there and waited. I thought okay, I am not going to worry anymore. I always tell people we just always celebrate wherever we find ourselves and then we move on. Those words came back to me and I thought you know what I am just going to have a good time.”

During the strength test Wilson’s opponent’s pira broke at the handle when it struck a gong.

“When it broke it was shocking,” said Wilson. “I am very apprehensive now because I knew my blade was heavier. David Baker (one of the judges) gets my sword and walks up to the gong. My sword struck the gong and I was relieved and elated. It actually cut into the gong. He then gave me a huge compliment. He told me that I nailed the heat treat. ‘Your edge took zero damage. I would never run my thumb down this edge because it is super sharp and everything held together. It’s very tight and you did a good job,’ he said. That has always been the thing that dad and I have talked about that separates a novice knifemaker from a professional knifemaker, someone who can hit the heat treat cause unless you can hit the heat treat and (the) process right all you have is a brittle piece of steel. When he said I nailed it, I was elated. That was the best compliment I could have gotten.”

Wilson said he and his wife are planning on using the winnings to do some remodel projects and take a vacation.

You can see more of Wilson’s work on his website at www.jehuknives.com.