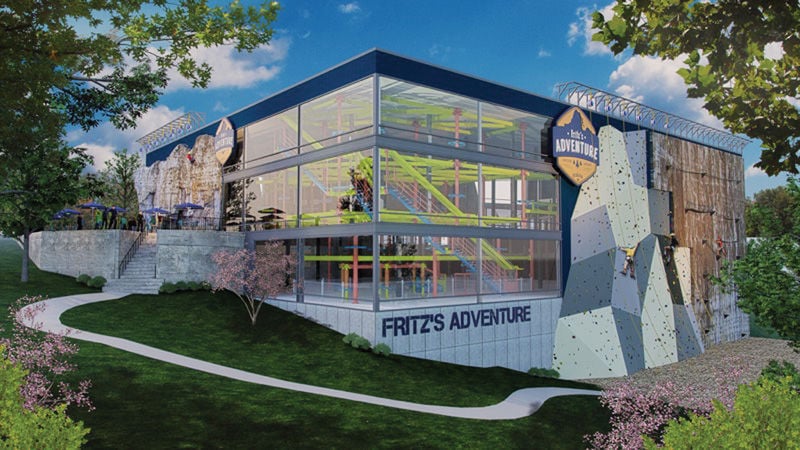 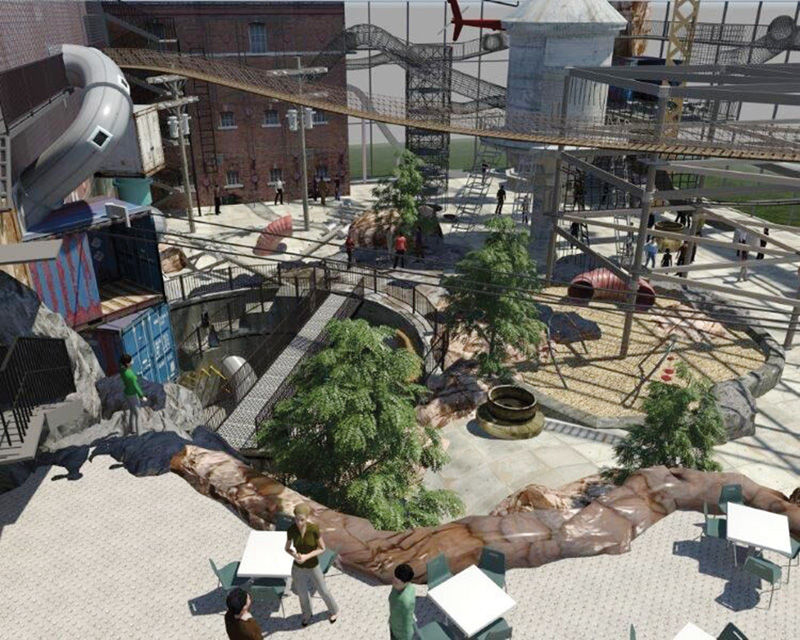 Updated at 2:20 p.m. to include more details

After several weeks of speculation and wonder, organizers announced Tuesday morning that Fritz’s Adventure, a new $10 million “family adventure attraction,” will be coming to Branson in the summer of 2016. The project will be owned by Fritz’s Adventure, LLC., and is being constructed by Matt Engram Construction.

According to a press release from Clear Marketing, Fritz’s Adventure is a “dynamic indoor family attraction that brings the excitement and challenge of an outdoor adventure into a multi-dimensional indoor environment.” The three-story, 80,000-square-foot building will include suspended bridges, a rock wall and utility poles for climbing, a full-size water tower, an “air-worthy” airplane for exploring, slides, tunnels, a parkour area, urban brick buildings to scale and a massive ropes course.

“This place is the ultimate thrill package experience that brings out the child in you,” said spokesman Ted Cunningham. He added it is a world of untamed, indoor adventure full of excitement, daring physical challenges and surprises around every turn, adapted for every age and ability level.

“Parents, grandparents, teenagers, toddlers and kids alike are encouraged to explore the adventure together,” Cunningham said. “The unique ability to have a different adventure each time will bring families back time and time again.”

According to Cunningham, the building will take on the appearance of a “conglomeration of natural and man-made structures in some sort of off-limits construction zone, but it’s an actual adventure park, meant to be climbed on and explored.” The release also stated the attraction will “deliver the sense of adventure with a perceived element of risk, all while in a strategically engineered and safe environment.

“It isn’t a climbing gym, a ropes course, a playground or just a museum,” Cunningham said. “It’s a thrill-packed, family-focused attraction that brings the excitement and challenge of the outdoor adventure into a multi-dimensional, indoor environment.”

The park will also feature a restaurant on the second floor of the building.

Fritz’s Adventure is currently being constructed near 76 Country Boulevard and Epps Road, where the Silver Fountain Inn once sat. The inn received major damage during the 2012 Leap Day tornado.

“The first thing is, this the removal of an eyesore,” said Branson/Lakes Area Chamber of Commerce President/Chief Executive Officer Jeff Seifried. “Second of all ... successful communities are all about reinvestment and job creation and that’s what we’re seeing here today.

“(Our) hope is this sparks much more reinvestment up and down Highway 76.”

In addition to all the fun slated to be had at the new attraction, businesses like Fritz’s Adventure are also good for Branson.

“I think for a destination market, this is something new, something different, something exciting and fun, and obviously in the Branson market, something family friendly,” said Taney County Partnership Executive Director Jonas Arjes.

“Those are all big wins ... it adds to the momentum and positive awareness we’re already seeing in the market.

“It garners more interest in Branson, and more opportunities for projects such as this one, or others, that we can take advantage of to grow.”

“We put in the press release this was going to be about 35 jobs, and I think that’s a little on the conservative side,” Arjes said. “I think we’re looking at more like 50 with full-time, part-time and seasonal. If we get 10 full-time jobs in arts, entertainment and recreation, those 10 new jobs create about three-and-a-half indirect jobs, including construction jobs.

“For the bigger picture, I think this project represents the continuation of the attention, awareness and positive momentum we’ve seen in Taney County and all the communities that make it up.”

Fritz’s Adventure is one of several new projects in the works in conjunction with the Spirit of 76 project.

“I saw something very similar to this recently in Pigeon Forge,” Branson Mayor Karen Best said. “I thought to myself, this is something really cool, but we’re going to have something bigger and better in Branson. This corner is going to be an iconic gateway for the new Spirit of 76 project. My predecessor, Raeanne Presley, had a great vision for what she wanted to see ‘the strip’ become, so I applaud her for having that vision, and I’m excited I get to carry out her legacy for the Spirit of 76.

“This is going to be a wonderful addition, I can’t wait to drive by and see all the fun stuff that’s going to be happening on this corner. You know me, I’m always up for an adventure, so fasten your seat belts.”

Fritz’s Adventure will be open rain or shine, 365 days a year.

“I’m excited about what this brings to both Branson and Taney County,” Taney County Alderman Brandon Williams said.

“I, for one, can’t wait to bring the family over to play.”