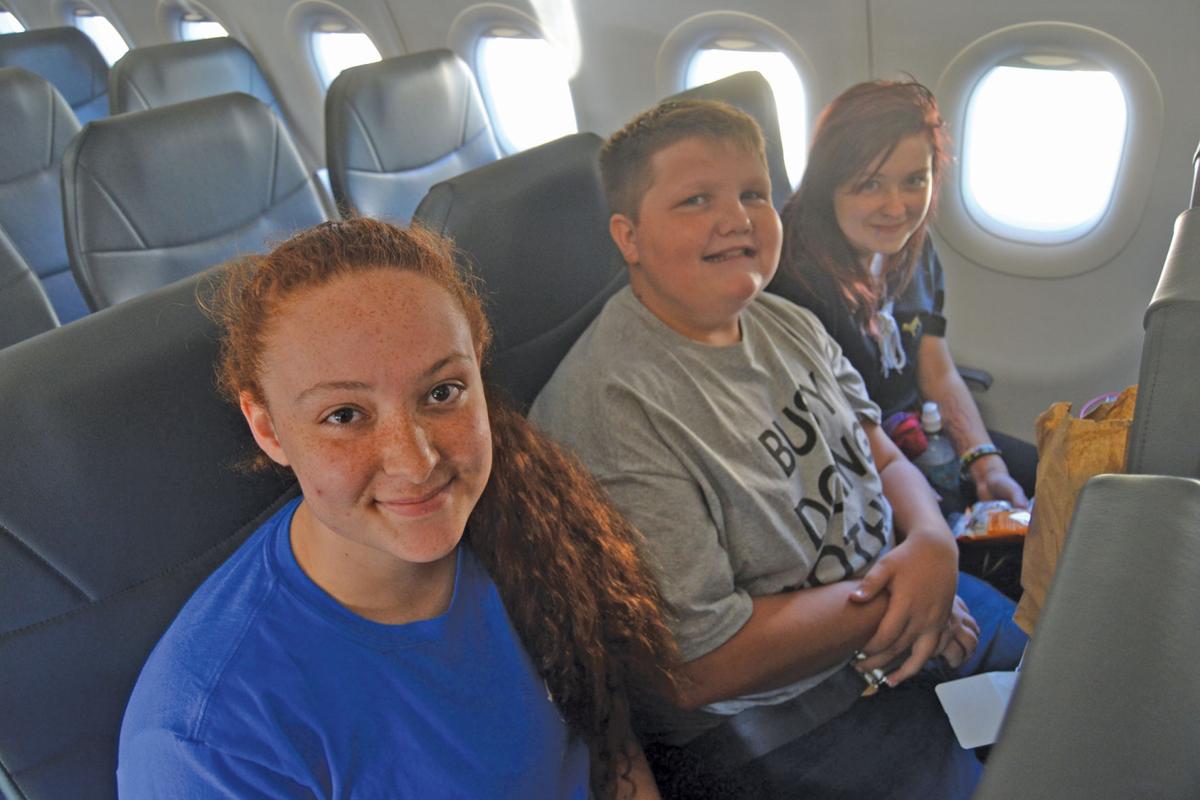 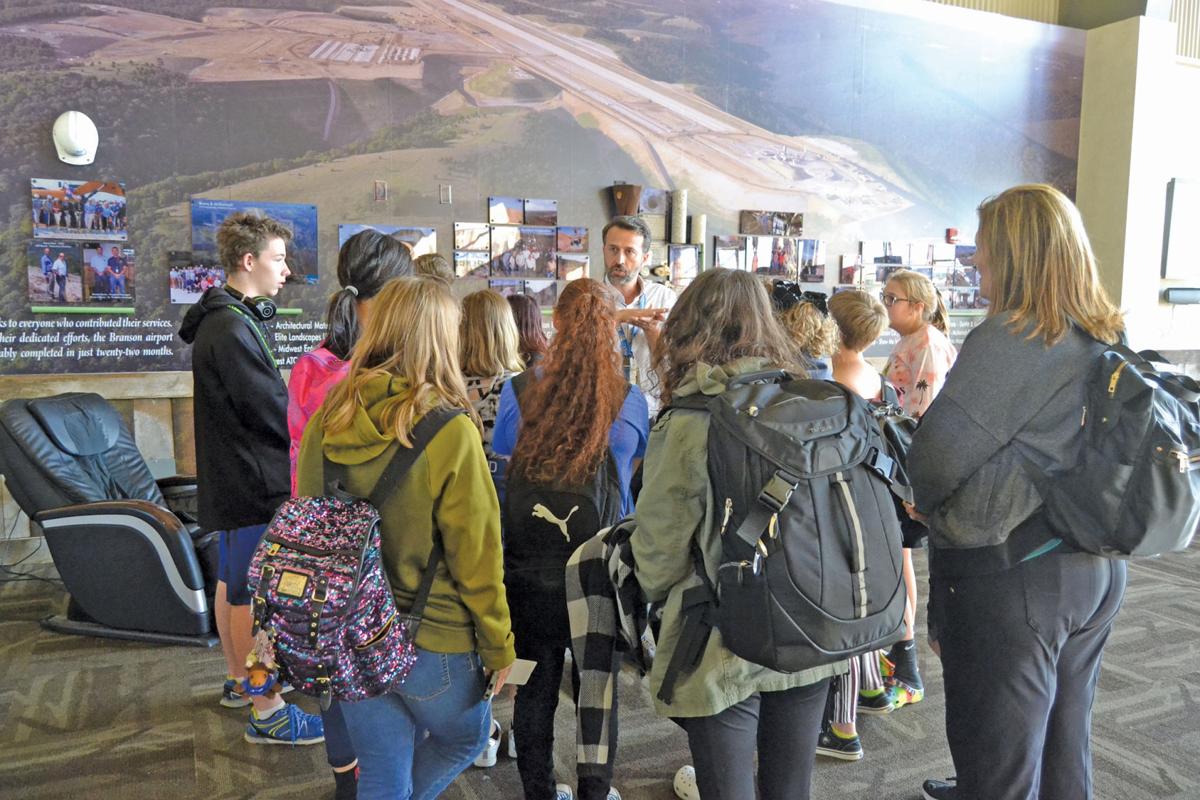 Branson Airport Deputy Director of Marketing Ty Lewis gives Hollister students a history lesson on the airport in front of a wall inside the terminal that showcases the construction process of the Branson Airport.

Branson Airport Deputy Director of Marketing Ty Lewis gives Hollister students a history lesson on the airport in front of a wall inside the terminal that showcases the construction process of the Branson Airport.

Thirteen Hollister Middle and High School students were given the unique opportunity on Oct. 23 to take a behind-the-scenes tour of the Branson Airport and even board a plane for a round trip flight to Dallas.

“During that period, over 1,000 area youth have had the opportunity to take their first commercial “Discovery Flight” to U.S. Airports such as Dallas, Chicago and Denver, currently served from the Branson Airport by Frontier Airlines,” said Lewis in an email.

In an email, Branson Airport Executive Director Jeff Bourk said they started this program when he and his wife, Branson Airport FBO Michele Bourk, moved to the Branson area with their family in 2007.

“It’s important that students get a tour of the airport to see all the jobs that support airport operations, from pilots to maintenance, police, fire, TSA, air traffic controllers and more … it allows them to explore these options as they start making career decisions,” said Bourk in an email. “We wanted to share our knowledge and passion for aviation with area kids to expand their options to include careers in aviation.”

Bourk added, “In more recent years Branson Airport has connected the Civil Air Patrol (CAP) with Hollister and Forsyth schools to offer even more opportunities for area students. The program has been nationally recognized and awarded for its success.”

Hollister Communications Director Kim Connell explained that being able to take a group of students on a flight each year serves a two-fold purpose.

“One is to really teach the kids about all the potential jobs in aviation that are out there. Things they can do. And also just to give students an experience that they may not have ever had the opportunity to have or will never have in the future, which is flying on an airplane, traveling out of the area. So this was a new experience for a lot of the kids.”

These opportunities are available to students who participate in the Hollister Tiger Academy Program. Connell said the participating middle and high school students receive an assortment of enrichment activities to learn about an assortment of careers. One of which is aviation and aeronautics.

“We actually have a flight simulator at our middle school, so students can actually get flight time hours to go towards getting a pilots license,” said Connell. “We also have the Civil Air Patrol, which is a program our students can participate in. Students that complete that program can graduate and go into the Armed Forces with an E3 Status.”

Students were also treated to a shuttle bus ride down the runway, which seventh-grade student Keenan Loman said he thought was pretty cool.

“I didn’t know that it would be that long of a runway, because when I got told that we were just going to fly in a smaller plane, but then I just found out that we’re not,” said Loman. “It’s like three times the size I expected it to be.”

Loman explained that being able to take a tour of the airport has only fueled his interest in aviation.

“It’s really cool for me to be able to do this, because at our school we have a flight simulator that we’re able to do. I’ve pretty much gotten close to mastering it,” Loman said. “This had been in my mind before to become like a flight attendant and stuff, so it’s going to be cool to ride in my first plane in my hometown.”

Loman added that he had been looking forward to taking the tour and flight since he found out about the program last year and found it super impressive that it only took 22 months to build the Branson Airport.

Another student impressed with the quick construction of the Branson Airport was 9th Grader Darlenys Polanco.

“I was hoping to learn about the history,” Polanco said. “How was this place made, by who or how much time did it take and I got to know a little bit about it.”

Polanco added that she originally wan’t planning on coming on the tour, but now she’s glad she did.

“I ended up coming here, and I really liked it,” she said. “I liked everything about it. How they gave the tour, how he talked about everything … and how they welcome their guests and everything.”

Following the tour, students boarded their flight to Dallas. For some of the students, this flight would serve as their first time ever on an airplane. One such student, seventh-grader Autumn Whitlow, said at first she was really afraid to even get on a plane.

“It was really cool. I’m really small. I’m short. So seeing all the people looking like ants is really cool,” Whitlow said with a laugh. “I was so excited getting to sit by the window, because I got to see all the tiny people and all the tiny buildings.”

Whitlow added that this was a really good experience for her and it helped change her mind on flying.

At the end of the tour and the flight home, a handful of students, including tenth-grader Makayla Lear, said they would consider a career in aviation.

“It seems kind of interesting. I got to researching on it, and they actually make quite a bit of money, so I thought that was kind of neat,” Lear said. “So it’s something I would probably invest in, to be honest.

“It was fun, and I hope to do more experiences like this in the future.”

The round trip flight to Dallas did not cost the students or the school anything and was sponsored by the Branson Airport and Frontier Airlines.

“This was a great time for our kids and again we are always blessed by what a supportive community we have,” Connell said. “We feel so fortunate to be surrounded by the community that we are that does so much for our students.”