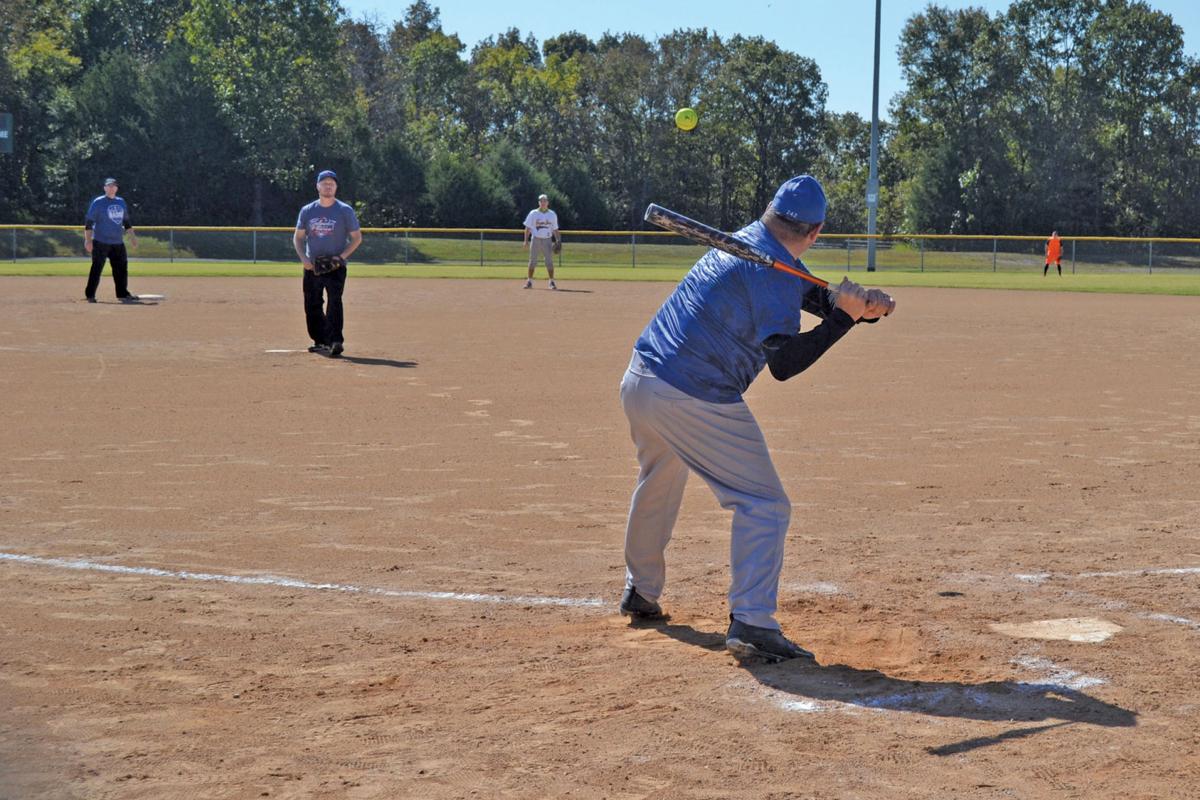 Greg Yartz, of the Branson Police Department, prepares to swing at a pitch. 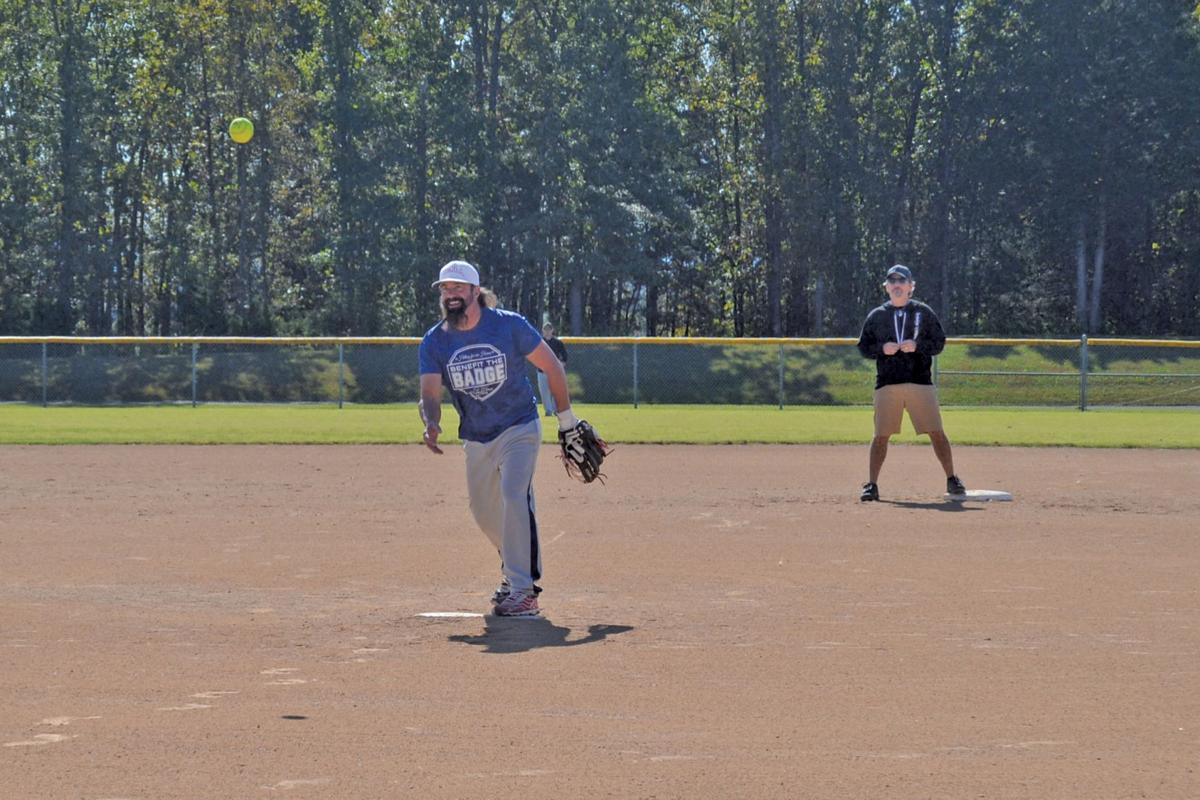 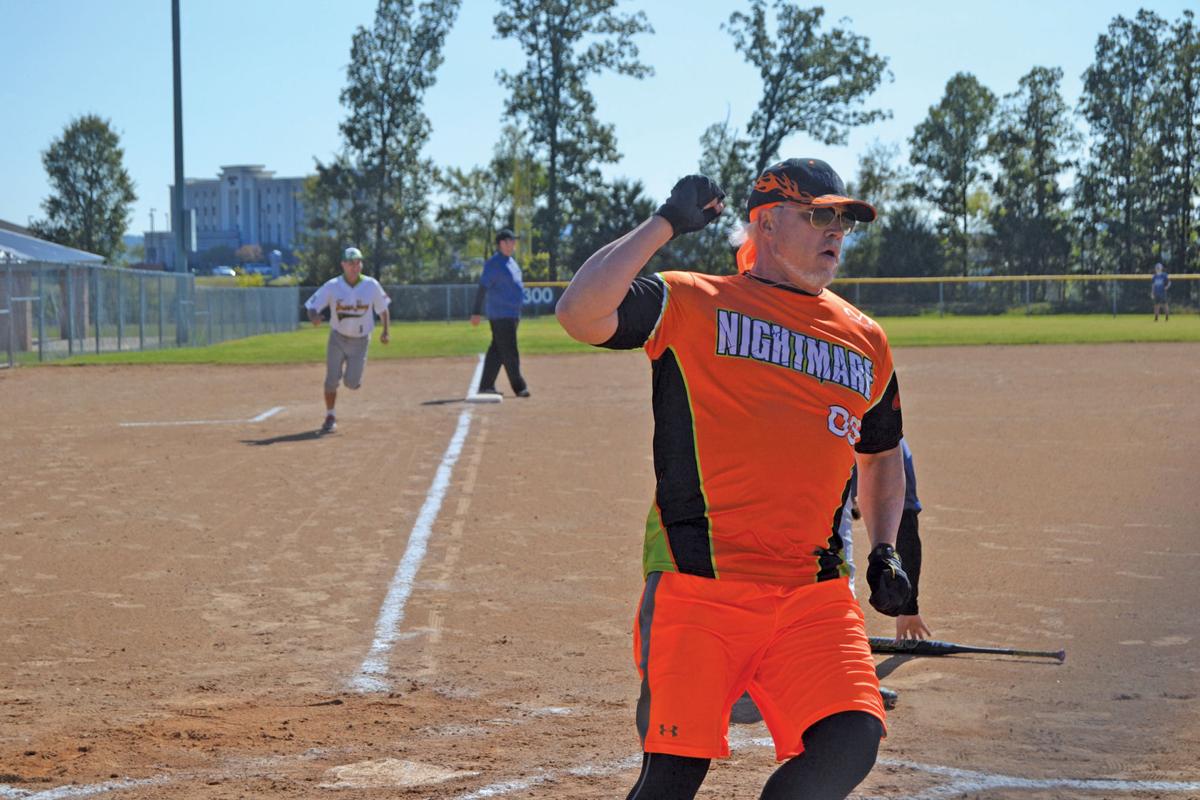 Kevin Knudson, with Six, crosses homeplate for a successful run for The Texas Tenors Team. Rounding third and running toward home is Johnny Lonestar with the Hamners’ Unbelievable Variety Show.

Greg Yartz, of the Branson Police Department, prepares to swing at a pitch.

Kevin Knudson, with Six, crosses homeplate for a successful run for The Texas Tenors Team. Rounding third and running toward home is Johnny Lonestar with the Hamners’ Unbelievable Variety Show.

Around $1,000 was raised for area law enforcement during the inaugural Benefit the Badge and The Texas Tenors Charity Softball Game on Oct. 16 at the RecPlex in Branson.

The softball game saw area Branson celebrity entertainers facing off against members of area law enforcement. Fogle Family Foundation and Benefit the Badge President Nolan Fogle said the idea to host this tournament as a Benefit the Badge fundraiser was inspired the old Branson Celebrity Softball Game, which saw a team led by The Texas Tenors playing against a team led by Six.

“I played in that for several years, and then they stopped having that for a couple of years. I was talking to JC Fisher from The Texas Tenors recently about that, and we got to talking and decided we should try to do it again,” said Fogle. “That then developed into basically deciding to make it an opportunity to raise some money in support of a charity.”

On the Branson celebrity side of the tournament, Fisher brought on board entertainers from his show, the Baldknobbers, Six, The Magnificent 7 Variety Show and more. Joining Fogle on his team, were members of the Taney and Stone County Sheriff’s Office, the Missouri State Highway Patrol and the Branson Police Department.

“We had a great time. (The law enforcement team) ended up winning 30 to 26. I believe I had three home runs and I hit a three-run home run in the bottom of the sixth to give us a good lead,” said Fogle. “Then we held them in the top of the seventh and were able to win the game.”

The softball game was also scheduled to take place the same week as The Texas Tenors 10-Year Anniversary Celebration Fan Week in Branson, so the stands were packed on Wednesday with fans cheering on The Texas Tenors and their team of area entertainers.

“I got to tell you, I haven’t been heckled that much in years as a player on the opposing team,” said Fogle with a laugh. “They were very intent. But I will tell you that by the time the game was over and we had a little food afterwards, I have become very good friends with their fans. I really enjoyed their enthusiasm during the game, even if it was against me.”

Fogle added that the entire event was mostly organized by Jeanie Robinson, a member of The Texas Tenors Fan Club.

Admission to watch the softball game was free, and the funds were raised from a prize raffle and donations made by attendees. The events proceeds will be combined with all the other money raised throughout the year through Benefit the Badge events like the recent Hitting For Our Heroes Softball Tournament and the upcoming Benefit the Badge Pickle Ball Tournament in December.

“Sometime right after the first of the year it will all be divided up amongst the departments. We approve the things they spend the money on, but it’s always something they need like protection devices. They’ve spent it on much needed, more powerful radios, bulletproof vests, guns and ammunition and things like that, that they need.

“That’s how the money will be spent.”

Following the success of this year’s game, Fogle said plans to host the event again next year have already been discussed.

For more information email benefitthebadge@gmail.com or visit the Benefit the Badge page on Facebook.