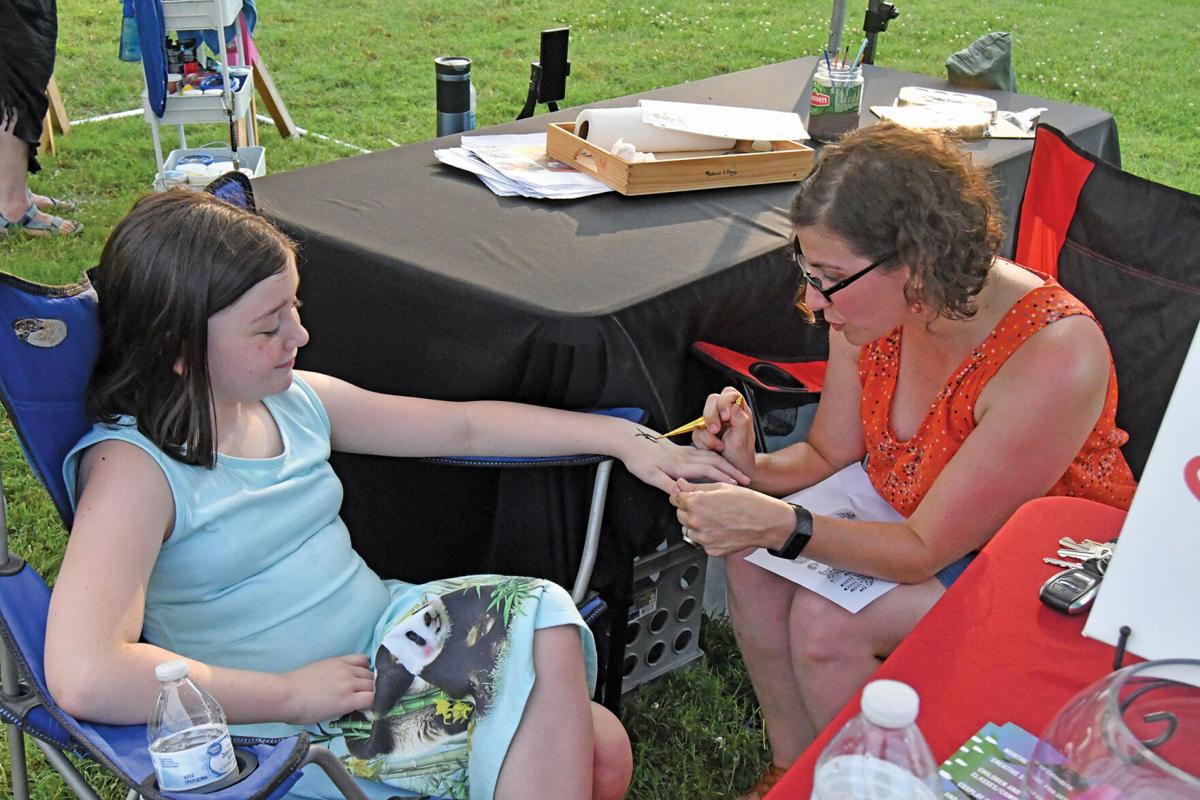 Alexis Fahr, 9, of Branson, getting a Henna butterfly at the Southwest Missouri Arts Connection booth at the Taneycomo Arts Picnic on Friday, June 18. 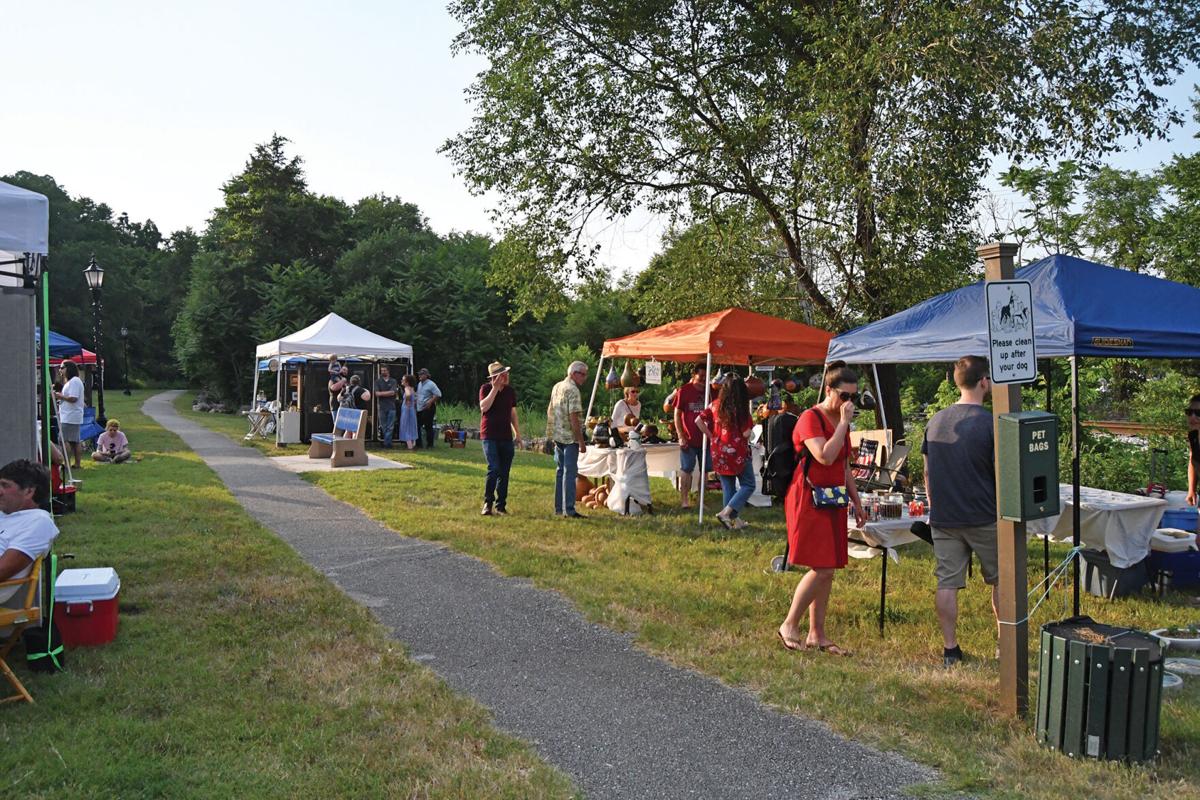 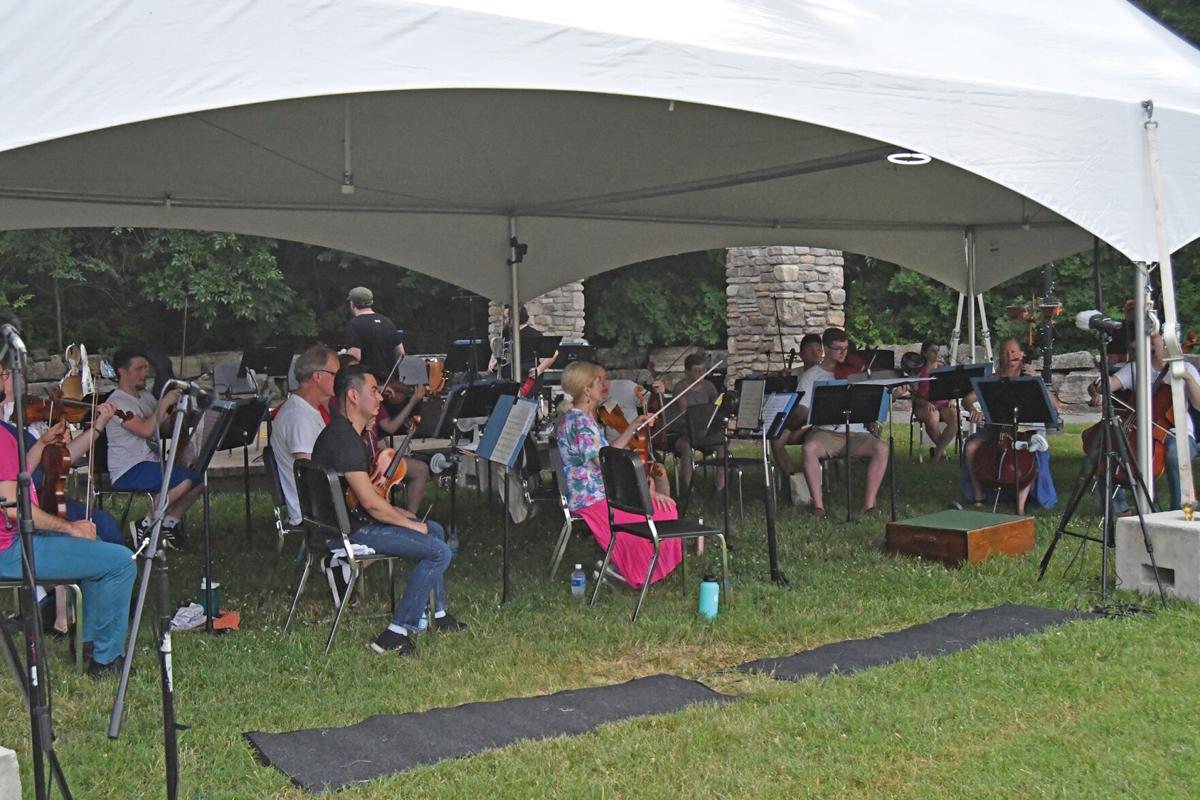 Taneycomo Festival Orchestra played a concert in the park to kick off their 10th season. Right, Local artists sold their wares at booths at the Taneycomo Arts Picnic.

Alexis Fahr, 9, of Branson, getting a Henna butterfly at the Southwest Missouri Arts Connection booth at the Taneycomo Arts Picnic on Friday, June 18.

Taneycomo Festival Orchestra played a concert in the park to kick off their 10th season. Right, Local artists sold their wares at booths at the Taneycomo Arts Picnic.

On June 18, I attended the Taneycomo Arts Picnic and the Taneycomo Festival Orchestra’s first orchestra performance of its10th season in Hollister. I took Alexis, my 9-year-old stepdaughter, with me.

We arrived a few hours after the event opened, hoping to get there when the day started cooling down a bit. The orchestra was still setting up, but the art booths were open for business.

With a kid in tow, it is no surprise our first stop was the face painting/Henna booth that was sponsored by the artists of Southwest Missouri Arts Connection and Technicolor Tattoo. Alexis had earned $5 to spend at the festival, which of course, she conveniently left at home. As a parent, do you ever notice how often that happens?

After negotiating with Alexis about how she could earn the money I was about to spend on her when we got home, she decided to start off her art picnic experience with a Henna of a butterfly on her hand. She was thrilled with her body art, although she had a difficult time not touching it or accidentally wiping it on her dress.

We then decided to go check out all of the art booths on the edge of the park grounds. As an artist myself, I enjoy seeing what other artists create, how they create their piece and the passion they have for the arts. I got to see several old friends and had fun visiting with them.

Alexis loved seeing all kinds of art. She found the gourd art interesting, as she was mesmerized by the fact that someone took fruit and made sculptures from them.

The sun was beating down on us, so we decided to head over to the Brian’s Brain Freeze food truck to get something to cool off with. When we approached the truck, Alexis scanned the menu and was immediately drawn to her favorite flavor, birthday cake. We were advised they could create a custom freeze with ice cream under the birthday-flavored shaved ice topped with whipped cream, sprinkles and cherries on top. Her eyes grew bigger and bigger as it was being described, so we ordered her one.

The birthday cake custom freeze was bigger than I expected, and Alexis loved it.

By the time we got her sweet cold treat, the orchestra was ready to begin, and we found a good spot for me to livestream the first part of the performance for the Branson Tri-Lakes News Facebook page.

Alexis had never been able to see an orchestra perform in person, although since we started homeschooling her last year, she has had the opportunity to listen to several different types of music, including classical. She had lots of questions about the types of instruments and what was about to begin. I took a few moments to answer her questions to teach her a little about classical music.

As the music began, Alexis stood there in silent awe, listening intently to the music. Finding something that gets her to be silent is not something that happens often but there she was just taking in the music.

We listened to the first half of the program. When it was over, Alexis asked if she could get her face painted. We headed back over to the booth, paid the small fee, and she told artist Christine Riutzel that she wanted a fire and ice painting.

We decided to call it a night a little early, but we both had so much fun. I loved that I could take Alexis with me to this fun, art-driven event. We had a great girls night out, and I think she now has a new appreciation for classical music.

For those who are interested, the Taneycomo Festival Orchestra has three more performances scheduled at 7:30 p.m. on June 23-25 at the Chad A. Fuqua Memorial Park in Hollister.