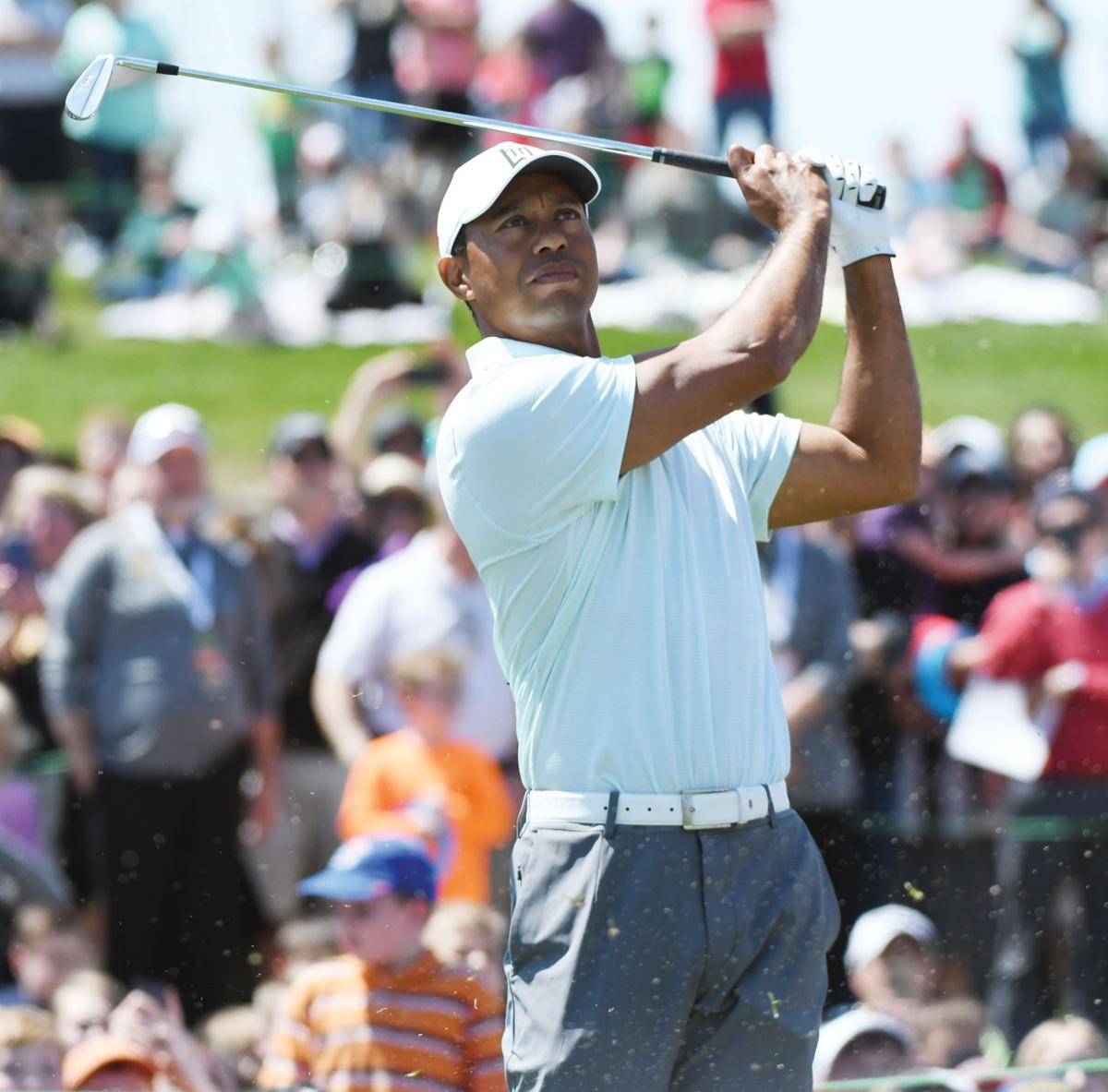 A crowd of more than 7,000 fans turned out last April when Tiger Woods conducted a kids’ clinic at the Buffalo Ridge driving range, part of Legends of Golf week. 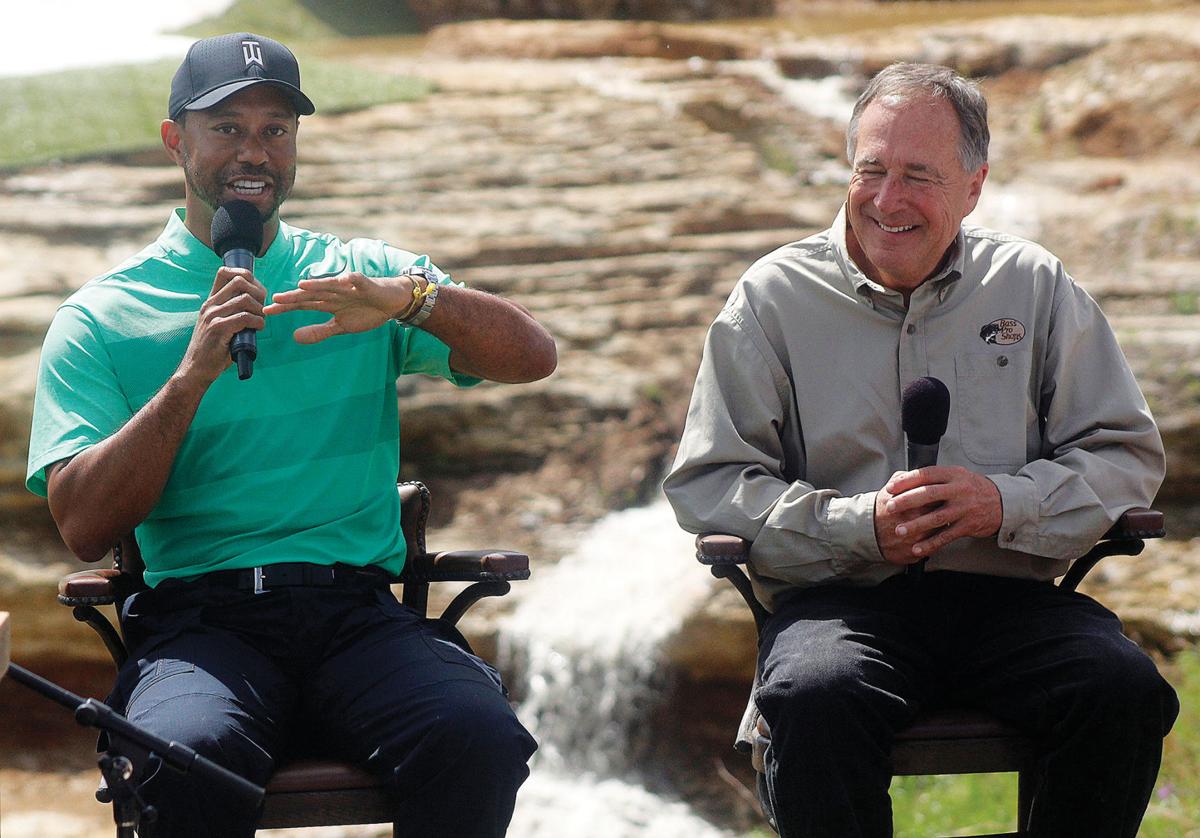 Tiger Woods has a connection with the Tri-Lakes region, with his first public appearance here coming with Bass Pro Shops founder and CEO Johnny Morris in April of 2017, when they announced Payne’s Valley, a new golf course project in Hollister.

A crowd of more than 7,000 fans turned out last April when Tiger Woods conducted a kids’ clinic at the Buffalo Ridge driving range, part of Legends of Golf week.

Tiger Woods has a connection with the Tri-Lakes region, with his first public appearance here coming with Bass Pro Shops founder and CEO Johnny Morris in April of 2017, when they announced Payne’s Valley, a new golf course project in Hollister.

Every generation has its “Where were you when?” moment.

For good or bad, seminal moments are how we mark time – how families, loved ones and communities are brought together, to celebrate or to grieve.

It doesn’t take much thought or thumbing through the mental scrapbook to take you back to the exact minute and second – and the sights, sounds and even smell – when life-altering moments happened.

Where were you when man first walked on the moon? When John F. Kennedy was shot? When the Berlin Wall came down? When the Twin Towers fell?

Sports are no different.

Whether it’s the Miracle on Ice engineered by the 1980 U.S. Olympic hockey team, or the unlikely heroics from David Freese in the postseason, en route to the 2011 World Series title for the St. Louis Cardinals, or for past generations, seeing Jackie Robinson break the color barrier in big-league baseball, it’s a way to mark the time.

There hasn’t been such a memorable moment in quite a few years for sports fans.

We now have it. The current generation now has its “Where were you when?” moment, courtesy of Tiger Woods in the final round of the Masters last Sunday.

If you relied on social media to tell the story, you may believe everyone in the world was glued to their television sets as Woods won his fifth green jacket during a riveting final round at Augusta National Golf Club.

With every shot he took, on every hole on the back nine at the storied venue, he stirred up emotions in fathers and sons, watching together as history was made.

For many – myself included – it wasn’t about Woods moving to within three of the record for major titles of 18, held by Jack Nicklaus. It wasn’t about his 81st PGA Tour victory, or his 18 World Golf Championship victories.

Same with the reported $2.07 million he made for a week’s work in Georgia last week, the nearly $5.5 million he has made through the first four months of this season, and the more than $118 million he has earned from golf alone during his career.

The bigger story – one that brought grown men to tears, led to fathers sitting down with sons to watch history, and had others calling their fathers to experience the event together, was the story of redemption.

Woods is not a perfect man.

He has faced criticism since he was a young pro, for perceived arrogance, being callous toward fellow PGA Tour professionals and ignoring the feelings of those who could do nothing for him.

The criticism intensified, through an ugly scene played out in public, with reported infidelities leading to a divorce between Woods and his supermodel wife. It led to the loss of endorsements, and also the respect of many of his fans and admirers.

Then came a physical downfall. He pushed his body to ridiculous levels, including the point where he won the 2008 U.S. Open with a pair of stress fractures in his leg and a knee so badly damaged that he needed surgery immediately following the tournament.

We had a front-row seat for many of those physical difficulties, after Woods and Bass Pro Shops founder and CEO Johnny Morris announced Payne’s Valley, a course south of Hollister near the Buffalo Ridge site designed by the Tiger Woods Design firm.

Shortly after that announcement in the April of 2017, Woods underwent his fourth back surgery, a spinal fusion procedure. There were reports Woods himself had confided to friends and associates that he believed his career as an elite-level professional player was over.

Learning how to walk again without pain came first. Playing in the backyard with his two kids? Not possible. Swinging a golf club again? Forget about it. Medical experts have labeled his comeback nothing short of “miraculous.”

A month or so after that initial trip to the Payne’s Valley site, he was arrested after being found asleep behind the wheel of his car at 3 a.m. near his home in Jupiter Island, Florida, in a driving lane with the engine running.

He went to therapy for an unspecified issue and later pleaded guilty to reckless driving.

Pundits on TV and seemingly everyone with a social media audience piled on – and for valid reasons.

I’m not here to say fans should love or hate Woods. It’s your personal choice.

Woods did not need to hit another shot in a tournament format to cement his spot as one of the best golfers to ever hit a ball. His spot on the Mount Rushmore of golf was safe.

No matter. He had his design company, restaurants that bore his name, and the TGR Foundation, designed to promote golf among inner-city children.

He could have walked away with few regrets from a professional standpoint, his legacy – even with the public missteps and embarrassing episodes – was largely safe and bullet-proof.

With children, he could have gone as far out of the spotlight as he could and lived the rest of his life happy and comfortable.

That would have been the easy way out – but as we learned on Sunday, there’s no fun in that.

Pick your favorite headline – “Return to Glory” seemed to be a popular one in the aftermath of his unlikely Masters victory.

For me, his story is all about redemption, and that’s why it resonates so well with fans of all ages.

Virtually none of us will experience life and all of the various ups and downs that go with it the way Woods has.

But we’ve all gone through things in our own lives that have made us believe there was no hope, no way out of a difficult situation and wondering what comes next.

To see Woods accomplish something that no one – including him – believed was possible, makes it a “Where were you when” moment.

To see him walk off the 18th green at Augusta and share huge hugs with his children, in virtually the same spot where he hugged his father following his first Masters and first major championship in 1997, is what stirred the emotions.

It all added up to this generation’s most poignant and most emotion-filled “Where were you when?” moment, because of the lessons learned as much as what Woods did at Augusta National.

And for area sports fans to have a connection to Woods through the Payne’s Valley course, some of which is set to open this year, with a full-scale opening sometime in 2020, just makes it all better. Even if it’s only a little, this also is “our” Tiger Woods.

As sports fans and observers in this day, we love a success story. Many savor the experience when heroes fall. The most rare of what comes next – a resurgence to the top – is what we saw last week at Augusta National.

Woods has spent 683 weeks in the No. 1 spot in the World Golf Ranking. It plummeted to near 1,200 in the depths of his freefall. The newest ranking released Sunday has him back at No. 6.

And for those paying attention, the next two majors – next month’s PGA Championship at Bethpage Black, and the U.S. Open in June at Pebble Beach – are at venues where Woods has won major championships.

He may not stay at 15 major titles for long.

After all, nothing, it seems, is impossible.

Where were you when you learned that lesson again? I bet you remember.