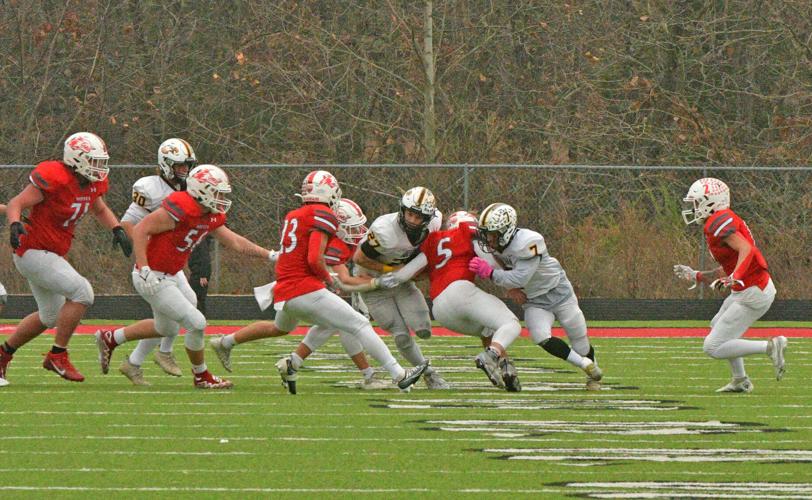 After the first touchdown, scored by the Eagles, the Wolves prevented much movement from Sullivan during the first half. 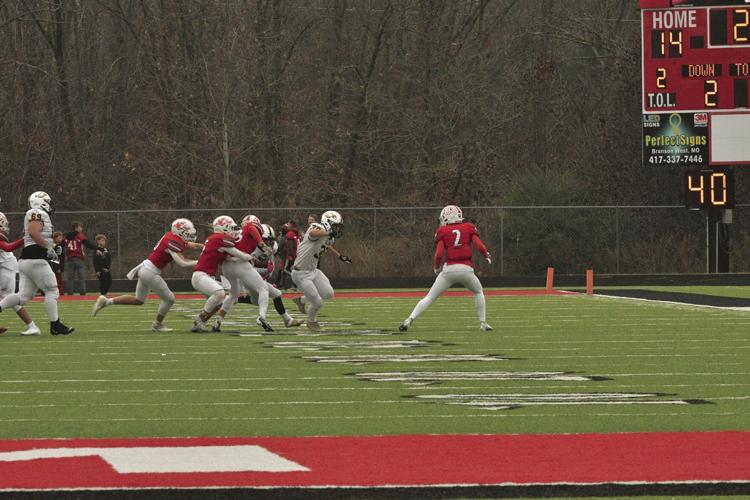 No. 13 James Dowdy, No. 10 Daniel Fliflet, and No. 5 Adam Lewis tackling the runner from Sullivan. 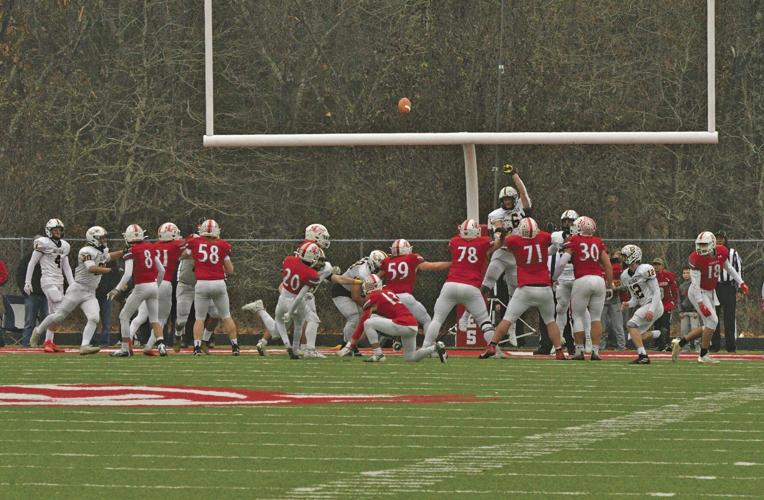 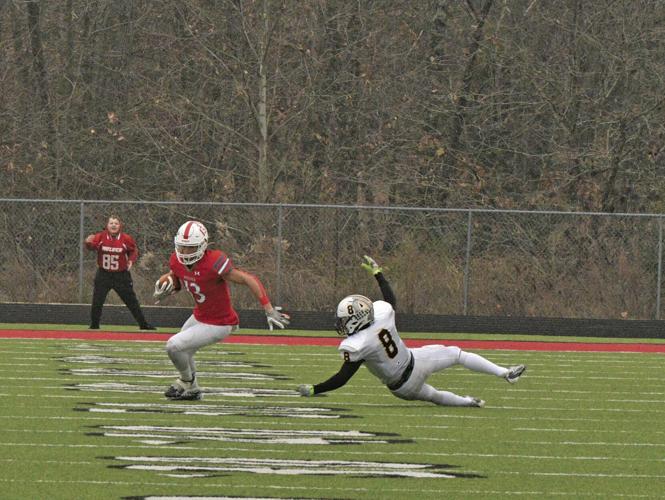 No. 13 James Dowdy avoiding the tackle. 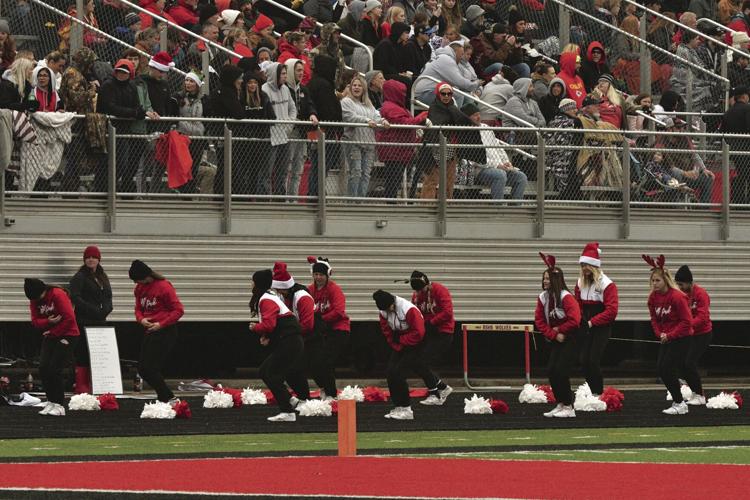 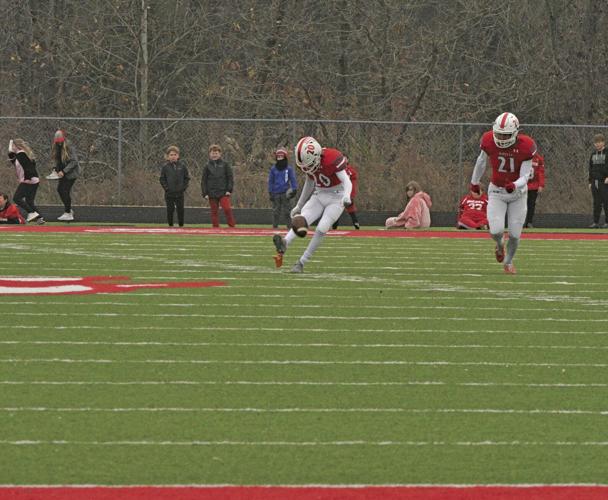 No. 20 Kicker Miguel Campos punting the ball next to No. 21 Ben Fuller. 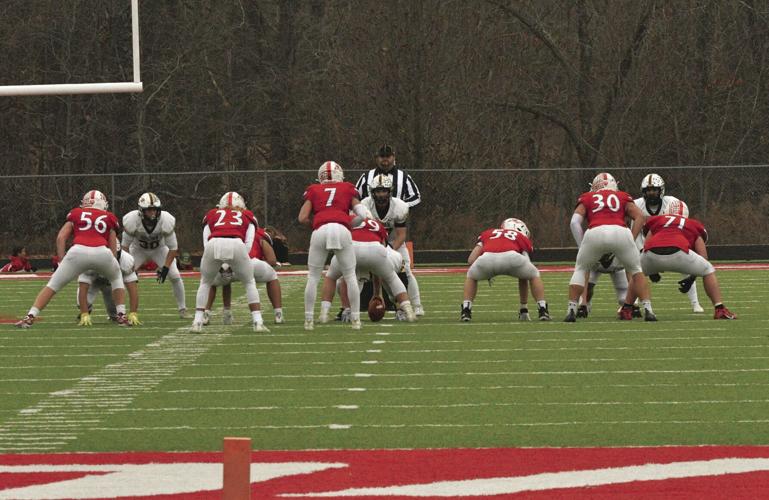 The Wolves in formation. 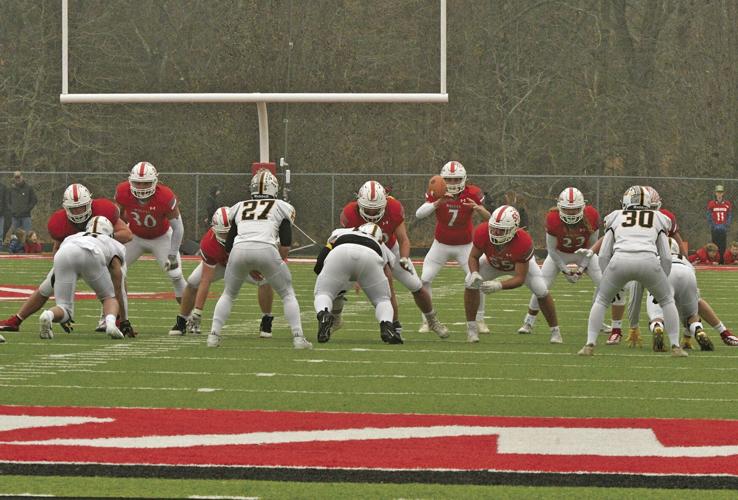 The Wolves in the middle of a play. 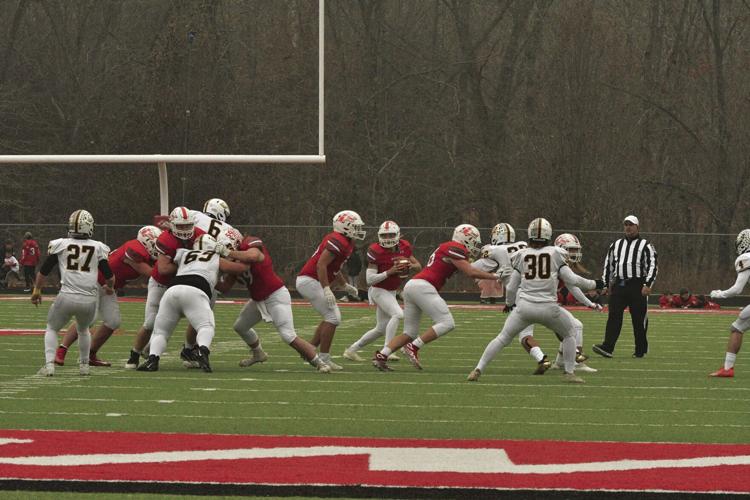 No. 7 Quarterback Blandy Burall trying to find an open man to pass the ball to. 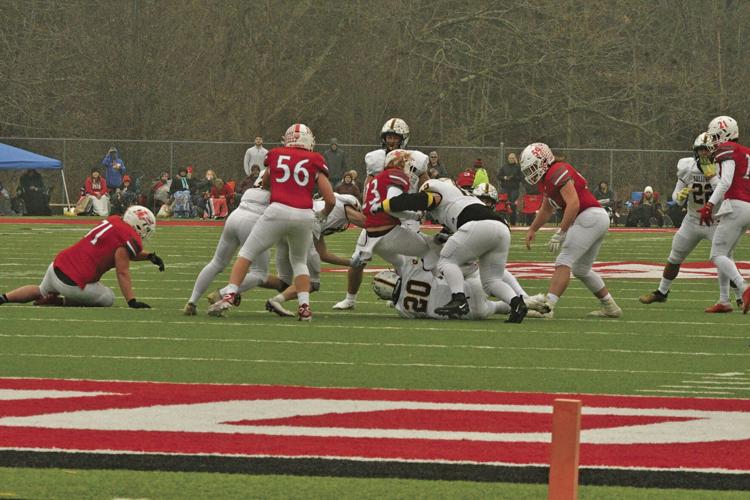 The Eagles taking down No. 23 Preson Blubaugh as he attempted to break through the line. 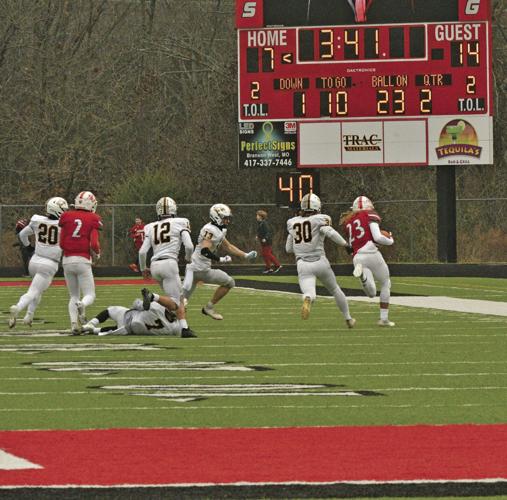 No. 23 Preston Blubaugh runs the ball. 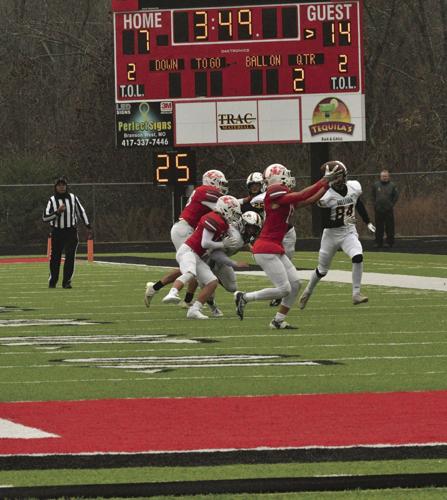 No. 13 James Dowdy catches the ball. 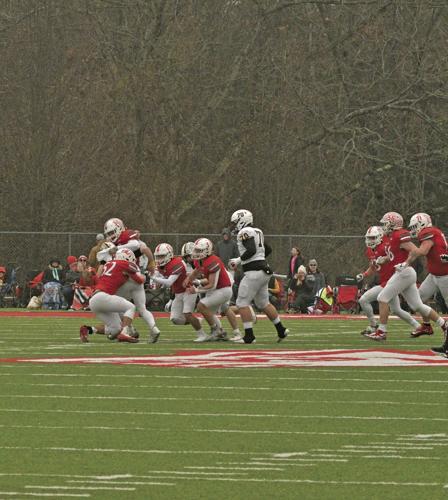 No. 52 Sebastian Michaud tackling the runner. 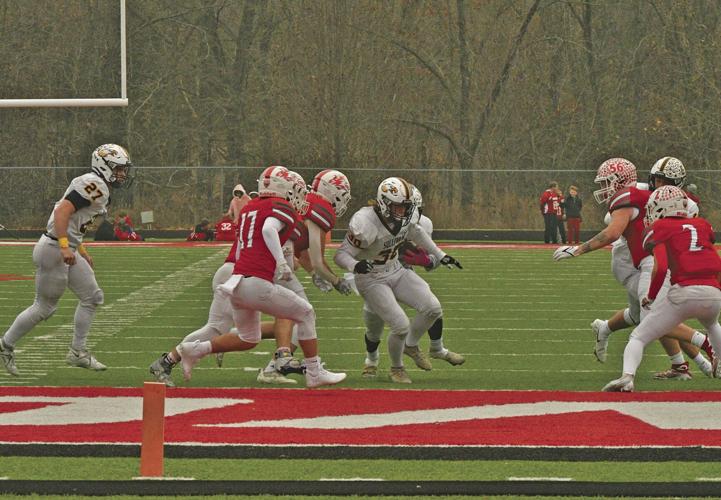 The Wolves defensive line trying to hold back the Eagles. 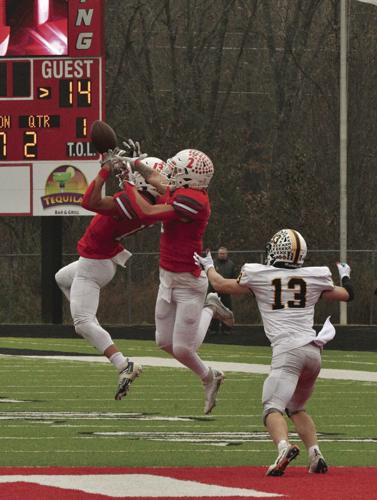 No. 2 Tracen Cobb and No. 13 James Dowdy trying to intercept the ball. 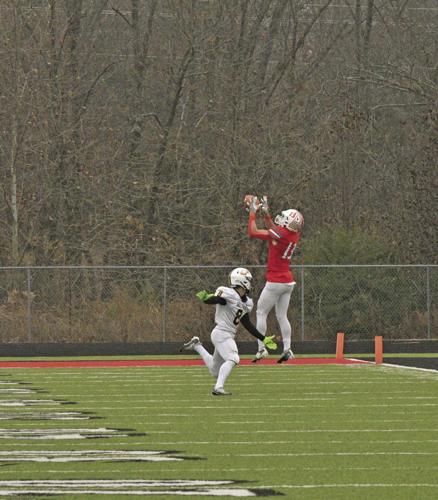 No. 13 James Dowdy jumps to catch the ball. 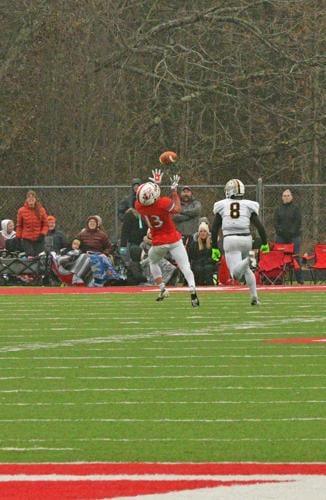 No. 13 James Dowdy catches the ball and takes it to the endzone for a touchdown. 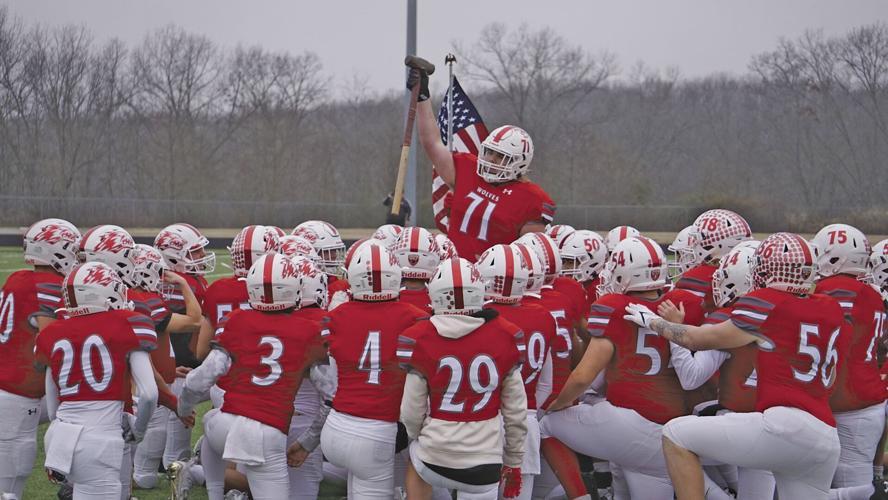 The Wolves advance to the Class 3 State Championship.

The Reeds Spring Wolves make history as they take a big win over Sullivan to head to the Class 3 State Football Championship Game next Saturday, Dec. 3.

The Wolves pulled away from the pack as they took an impressive win of 49-20 over the visiting Sullivan Eagles in front of more than 2,000 fans at Carl Langley Field on Saturday, Nov. 26.

The Eagles took a lead early in the game 6-0, but the Wolves answered back quickly by tying up the score and then taking the lead with a good kick by No. 20 Miguel Campo. The two teams battled for the rest of the first half, neither allowing the other much ground.

The score was tied 14-14 heading into the end of the second quarter. With seven seconds on the clock in the first half, the Wolves went for the touchdown when they had the ball on their own 19 yard line. Junior quarterback No. 7 Blandy Burall bought some time and threw the ball as far as he could for junior wide receiver No. 13 James Dowdy. Between two defenders, Dowdy jumped up and caught the ball and went 81 yards for the touchdown, which put the Wolves in the lead 21-14.

Both teams came out fighting early in the third quarter, scoring touchdowns, the Wolves No. 2 Tracen Cobb bringing in the first touchdown of the third quarter. The Wolves controlled the rest of the second half, with a kick-off return by Dowdy and a fumble return by No. 5 senior Adam Lewis for two more touchdowns in the third. In the fourth quarter, No. 1 Addison Abshire brought in the last touchdown for the Wolves, bringing the final score to 49-20.

Helping the Wolves take their team to the State Championship was No. 23 senior Preston Blubaugh who rushed for 117 yards. No. 56 senior Josh Lowe had a big impact on the game in his defensive line position bringing the Eagles to a halt. Dowdy caught seven passes for 223 yards and a pair of touchdowns plus a kick-off return for a touchdown and No. 5 senior Adam Lewis, who got the Wolves defense a touchdown with the fumble recovery return in the third quarter. Burall, the first 2,000-yard passer in Reeds Spring history, finished the game 12-for-19 with 304 yards and four touchdowns.

Reeds Spring Head Football Coach Andy McFarland said the team has worked hard and has been driven to make improvements to go as far as they can.

“I’m so proud of everything that they’ve done this year,” McFarland said. “We got to this point for a reason. It was our kids being dedicated to making improvements and not being satisfied with the status quo.”

McFarland said he told the players to leave it all on the field and continue this history making season.

“I told them this is the first time in school history we’ve ever been there,” McFairland said. “Let’s not be satisfied with just making it, let’s go win.”

The win not only sends the Wolves to their first ever State Championship Game, but sets a new record for number of football wins in a season as Reeds Spring is now 11-2 for the season.