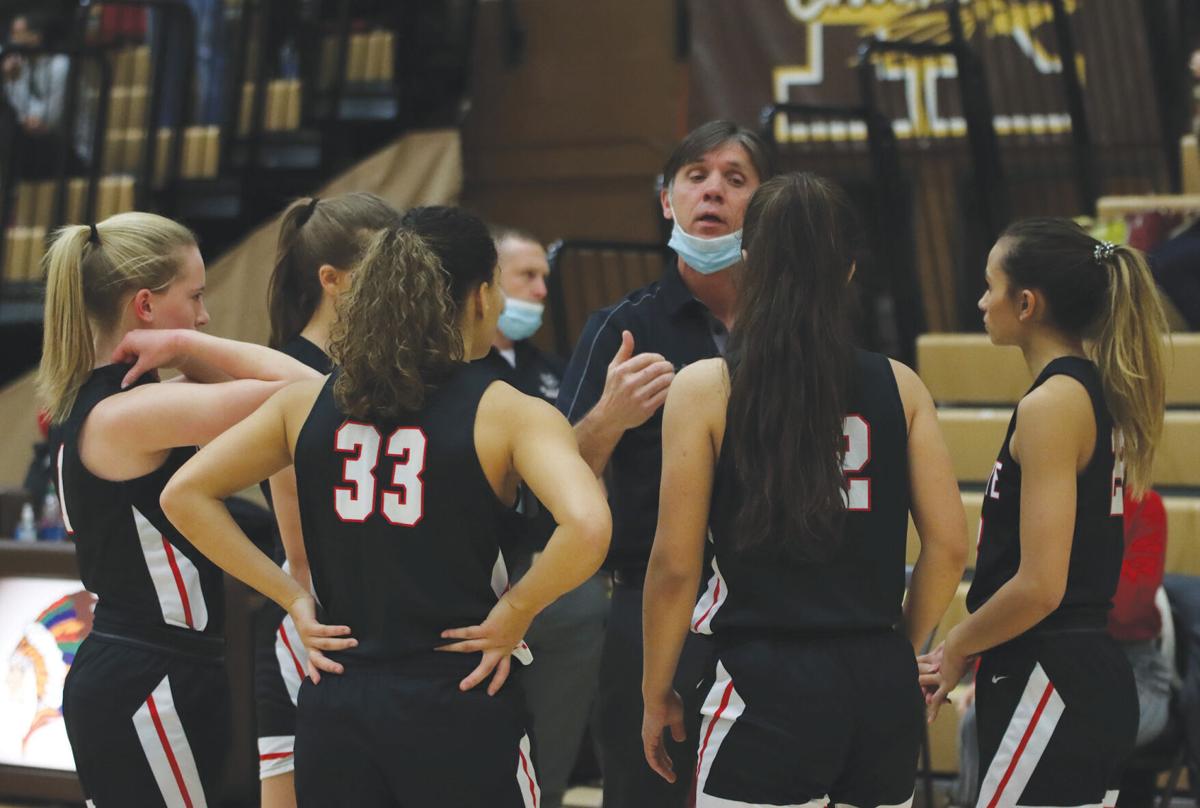 Head coach Ken Elfrink chats with his team prior to the Blue Eye girls’ game against Nixa in the Pink & White Lady Basketball Classic on Dec. 29. 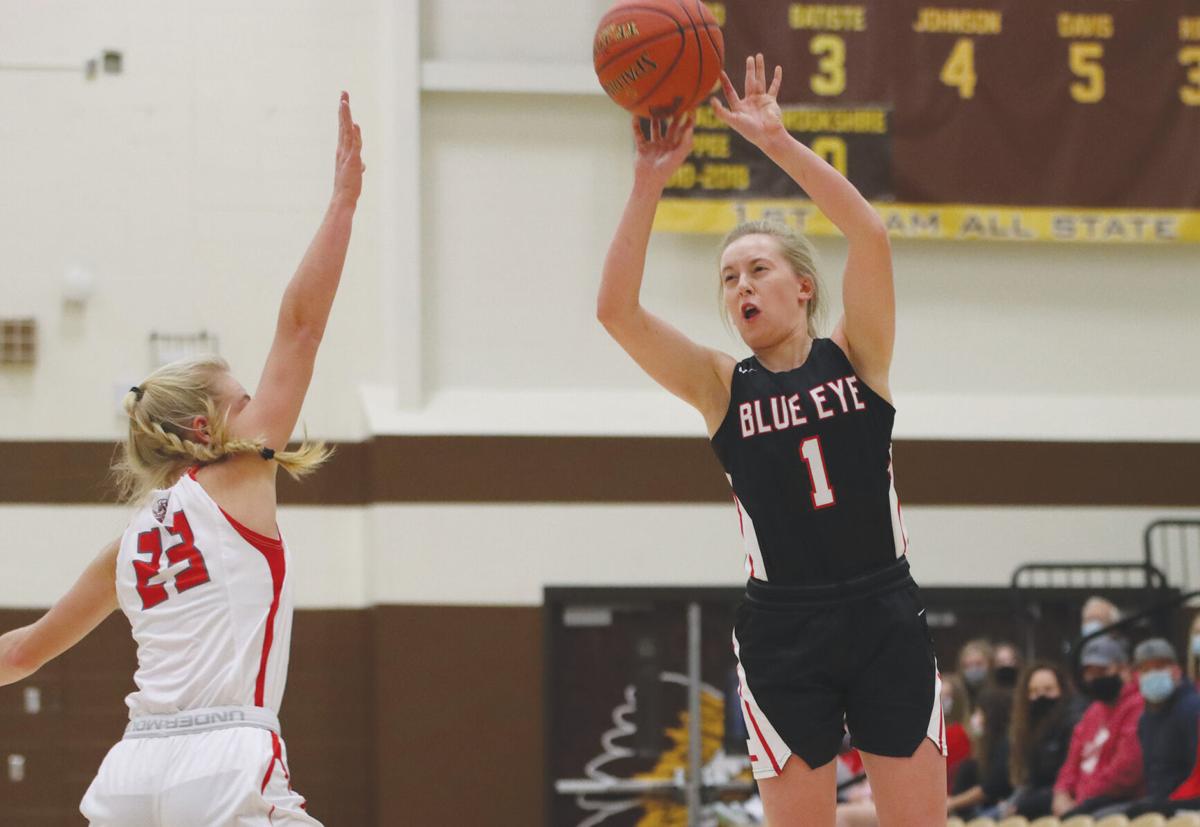 Junior Avery Arnold shoots a 3-pointer as a Nixa defender jumps to block the shot.

Head coach Ken Elfrink chats with his team prior to the Blue Eye girls’ game against Nixa in the Pink & White Lady Basketball Classic on Dec. 29.

Junior Avery Arnold shoots a 3-pointer as a Nixa defender jumps to block the shot.

SPRINGFIELD, Mo. — Since last season, the Blue Eye Lady Bulldogs knew they’d have a tough year this year. They’d just come off the best finish in school history with 27 wins, a third place finish at state and 400 wins for head coach Ken Elfrink.

The Lady Bulldogs, despite being a Class 2 school, were a team bigger schools looked at as being a real competitor. This year is no different.

As a Class 2 team, the Lady Bulldogs are smaller in all meanings of the word compared to the big-class schools they play. Their bench is smaller, they’re shorter and the schools they play every season are usually smaller as well. For Blue Eye to be ranked No. 4 in the top half of the White Division in the Pink & White Lady Basketball Classic was a huge feat for the year.

The bigger feat, though, would be winning against some of those big-class schools.

In their first round game against Parkview, the Lady Bulldogs did just that.

The Lady Bulldogs defeated Class 6 Parkview 65-49. While the win was big, Elfrink wasn’t satisfied with how his team played. Parkview’s roster was limited, and things weren’t done how he discussed with his team before the tip.

“We didn’t do the little things early on that we had talked about that we needed to execute,” Eflrink said after the game against Parkview. “But we played hard, hit some shots, and got back into a rhythm.”

But, with the win, the Blue Eye girls had another chance to prove to their coach they could hang with a Class 6 school. They faced Nixa on Tuesday afternoon.

Last year, the Lady Bulldogs defeated Nixa 47-39 in the Pink & White tournament. Juniors Avery and Riley Arnold moved to Blue Eye from Nixa before high school, and faced off with a familiar red and white team for the second year in a row. This time, Nixa won the battle 52-42.

In the first quarter, Nixa controlled the game and held Blue Eye to just four points. It was a very foul heavy first quarter — Nixa had seven team fouls and Blue Eye had six after the first eight minutes of play.

“I think if you take away that first quarter, you’ve got a totally different game,” Elfrink said.

Life in the Red: Vedral will have (at least) one more season at Rutgers

Missouri turns defense into offense in win over South Carolina

Because Nixa’s bench had much more depth, it had the opportunity to play more players and prevent their team from having anyone in foul trouble. Blue Eye, on the other hand, has 10 players listed on its roster, but only about six of those see a high number of minutes each game.

By halftime, Nixa led 29-20, but several Blue Eye girls had more than one foul.

“We just had to deal with it — it might have changed our aggressiveness on hitting the board and stuff a little bit,” Elfrink said.

In the first half, Blue Eye struggled with Nixa’s height, especially on rebounds below the basket. She didn’t play much in the first quarter, but sophomore Samantha George had six points in the second quarter, all of which she scored on second chances.

“Sam’s come along real nice, and I think this is a good game for her to see she’s got the ability to do stuff like that,” Elfrink said. “She got shots off the rebound and put it back, which kind of sparked us, and you’re gonna need kids like that on your team all the time that step up to play.”

It was still difficult for Blue Eye to get a lot going in the second half. Nixa defended junior point guard Riley Arnold hard for the entire game — and double-teamed her up high more often than they didn’t. Her twin sister junior Avery Arnold and junior Kyla Warren had to step up and handle the ball more often than they’ve had to in past games.

Because of the high pressure, Arnold ended the game with more fouls than points in what was likely the first time in her career. She had four fouls and three points in total.

“I know she’s probably harder on herself than anybody else, but I told the kids we got better today, and that was the main thing,” Elfrink said.

Warren and Avery Arnold did step up, though. Avery Arnold had 13 points, 12 of which were from behind the arc, and Warren scored 12.

Nixa moved on to the semifinals of the White Division, and Blue Eye dropped into the bracket that played for fifth place.

Blue Eye will start the new year in another tournament, facing Pierce City in the first round of the Sparta Lady Classic on Jan. 7.