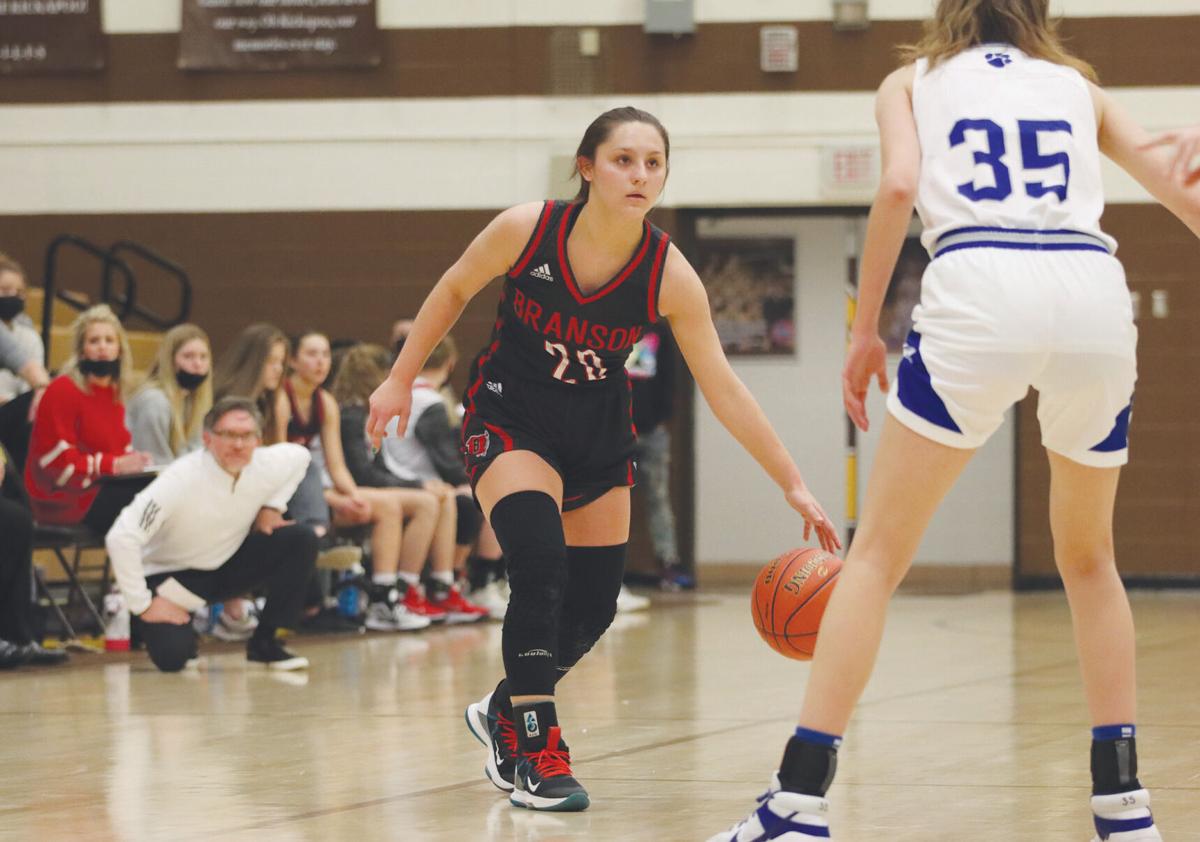 Branson junior Rachel Riveros dribbles the ball slowly up the court. Branson lost 51-37 to Carthage in the first round of the Pink & White Lady Basketball Classic on Dec. 28 at Kickapoo High School. 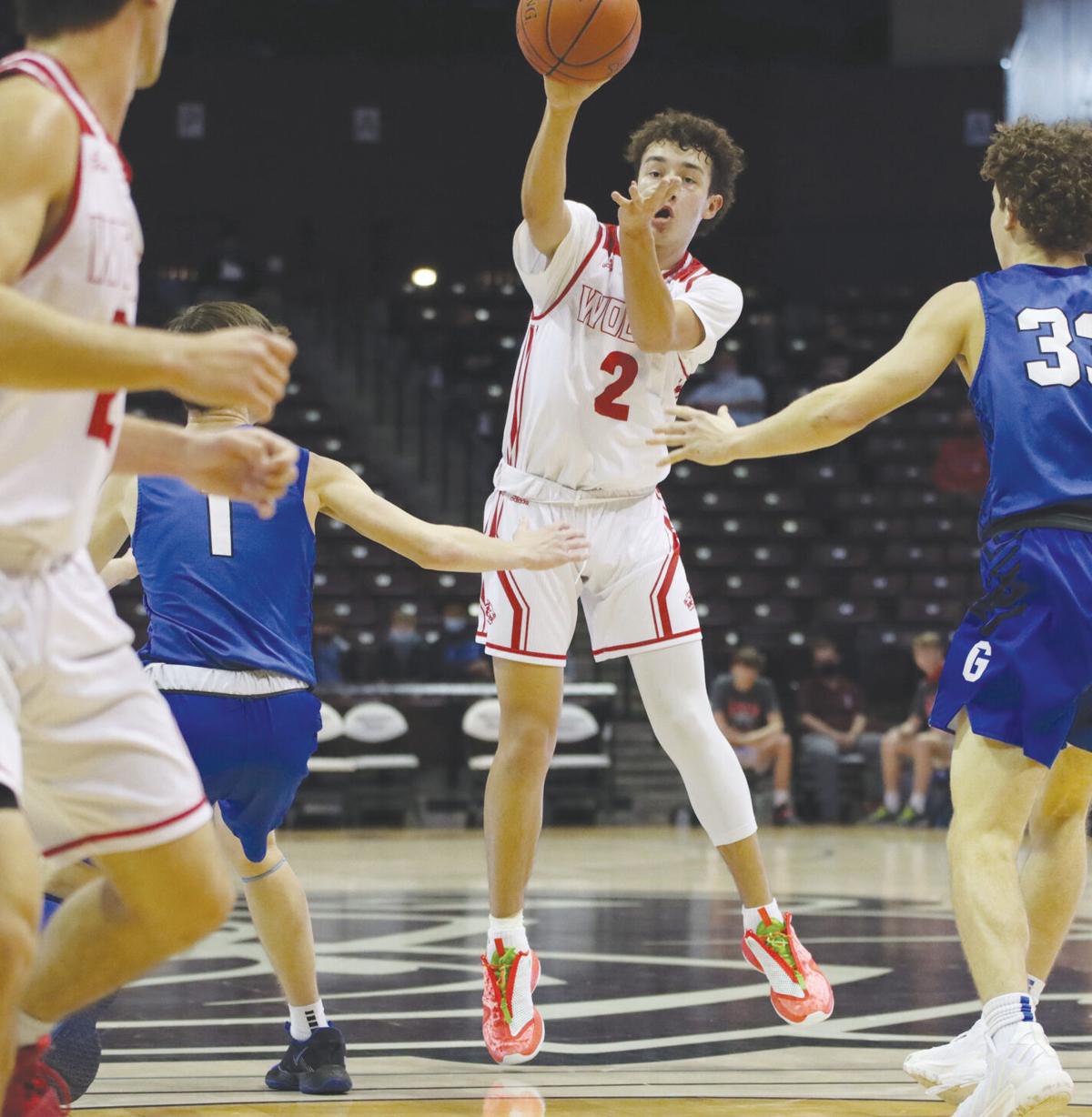 Reeds Spring junior Ty Cooper passes the ball to his teammate. Reeds Spring lost 80-36 to Greenwood in the first round of the Blue & Gold Tournament on Dec. 28 at JQH Arena.

Branson junior Rachel Riveros dribbles the ball slowly up the court. Branson lost 51-37 to Carthage in the first round of the Pink & White Lady Basketball Classic on Dec. 28 at Kickapoo High School.

Reeds Spring junior Ty Cooper passes the ball to his teammate. Reeds Spring lost 80-36 to Greenwood in the first round of the Blue & Gold Tournament on Dec. 28 at JQH Arena.

Through the two weeks of prime holiday tournament play, the Branson Tri-Lakes News attended or listened to via radio broadcast more than 15 games. Instead of picking just two athletes for all the games that happened from Dec. 21-31 as players of the week, we will highlight several players who made an impact for their teams in all area tournaments.

Athletes are listed in alphabetical order by last name.

Blue Eye was one of the smallest schools in either division of the Pink & White Lady Basketball Classic. It wasn’t the Lady Bulldogs’ first time playing bigger schools, but there were plenty of struggles.

Avery Arnold stepped up each game and made buckets when her team needed it the most. Through four games, Arnold averaged the most points of anyone on her team. She took on more ball handling roles, according to head coach Ken Elfrink, and increased her aggressiveness as the games got more intense.

In the final game of the tournament, the Lady Bulldogs defeated El Dorado Springs 55-52 in overtime to take fifth place. Arnold scored 23 that game.

As has been the story for the last couple of years, Kendrick Bailey continues to lead her team in scoring. But in a tough tournament schedule, Bailey was forced to shoot less and pass more, which she did incredibly well — even in the Lady Tigers’ loss to Miller in the semifinals of the Walnut Grove Holiday Classic.

Bailey was challenged in a way she hadn’t been yet this season, and she came out a better athlete because of it. She still led her team in average points, but Bailey’s game as a true point guard developed with the help of her teammates over the week.

While Josh Barlow didn’t have the best championship game, his overall performance in the Walnut Grove Holiday Classic put him on this list as well as earning himself tournament MVP. Barlow has the shooting ability his team needs, which head coach Pete Leonard hinted at before the start of the season, and he’s also an aggressive rebounder.

When Barlow’s on his game, his teammates know he’s the one to find to shoot no matter where he is on the court. When he’s not, he’s responsible and selfless enough to share the ball with teammates, according to Leonard.

Cooper’s confidence will continue to build this season, as it should have after scoring eight points against Greenwood — a team his head coach Austin Kendrick calls the best in the Ozarks.

Since Kendrick Bailey was more heavily guarded than in past games, Gabby Franciskovich stepped up to help fill in the role of scorer for the Lady Tigers over the last two weeks. This came as no surprise to head coach Jimmy Lincoln, who has praised Franciskovich’s abilities as an outside shooter since the beginning of the season.

Franciskovich has developed a lot since the first game of the season against Ava. Her shots are more confident and natural, and this is expected to continue through the thick of the season into postseason play.

Mark Smith back in rhythm as Missouri downs South Carolina

Lance Hafar has been struggling with an injury this season — and even missed several games at the start of the season because of it. Hafar’s appearance against Greenwood proved important — the senior had to share the responsibility of guarding 5-star recruit Aminu Mohammed last week.

Hafar, who spent a lot of time guarding and on defense, scored nine against Greenwood. While 17 isn’t typically a low score, that’s how many Hafar held Mohammed to. Greenwood sat its starters for most of the fourth quarter, as well, but it was a tall task for anyone. Head coach Austin Kendrick said Hafar — like the rest of his team — did exactly what he asked, and that’s all he could hope for.

Cole Jones has had one heck of a season so far for Hollister. Jones shares the point guard position with senior Brady Peterson, but don’t let that fool you on his shooting abilities.

In the Walnut Grove tournament, Jones was the most consistent he’d been all season. Hollister worked through its weave before getting the ball to Jones so he could shoot more shots that were uncontested. Head coach Pete Leonard yelled at several of his other players on more than one occasion to “get him the ball — he’s hot right now.” Jones’ consistency earned him all-tournament team honors.

The Lady Pirates are struggling this season without any seniors, and they’re still missing a few of their best juniors due to injury. Riveros, though, has provided a spark and confidence in her team.

In the Pink & White Lady Basketball Classic, Riveros was aggressive in getting to the basket. She played quick and was almost always one of the first back in transition to defend. She has struggled this season with turnovers, but her overall play has improved since the start of the season.

Buck Sanders was the guy head coach Eric Rogers was going to look to as a leader from the get go. As the season has gone on, it’s clear why. The Forsyth Panthers are good without him, but they’re really good with him.

Sanders, as unique as his shooting face may be, is one of the most consistent 3-point shooters in the area. He looks as relaxed during games as he does during warm ups. His energy is a tad more intense, but his confidence when shooting from well beyond the arc and with pressure you rarely see from other athletes his age.

He made key shots in Forsyth’s game against Hollister, and he’s one of the reasons the Hollister-Forsyth games are so competitive.

The Pirates have had an up-and-down year so far. They’ve alternated wins and losses since the first game for a 4-5 record. In the Blue & Gold Tournament, the Pirates had a lot to be proud of — and a lot to work on.

Kyle Scharbrough, while he still has plenty to work on, has been a bright spot for the Pirates. In their first game of the tournament, Scharbrough was aggressive in getting to the basket and putting up shot attempts. The Pirates lost their first game, but Scharbrough continued his effort into their consolation game, where he put up 13 points to help them to a win over Purdy.

It’s been a tough go around for the Lady Wolves this season. Under a new coach with a new style, the Reeds Spring girls are struggling to find a rhythm. Jade Watson, though, has quickly come into the role of team leader, and she continues to fill this role game in and game out.

Reeds Spring lost to Marionville in the first round of the Seventh Annual Southwest Girls Holiday Tournament but turned around and defeated Exeter. Head coach Jessica McNichols said Watson has been an asset on and off the floor because of her ability to boost the confidence of her teammates despite what’s on the scoreboard.