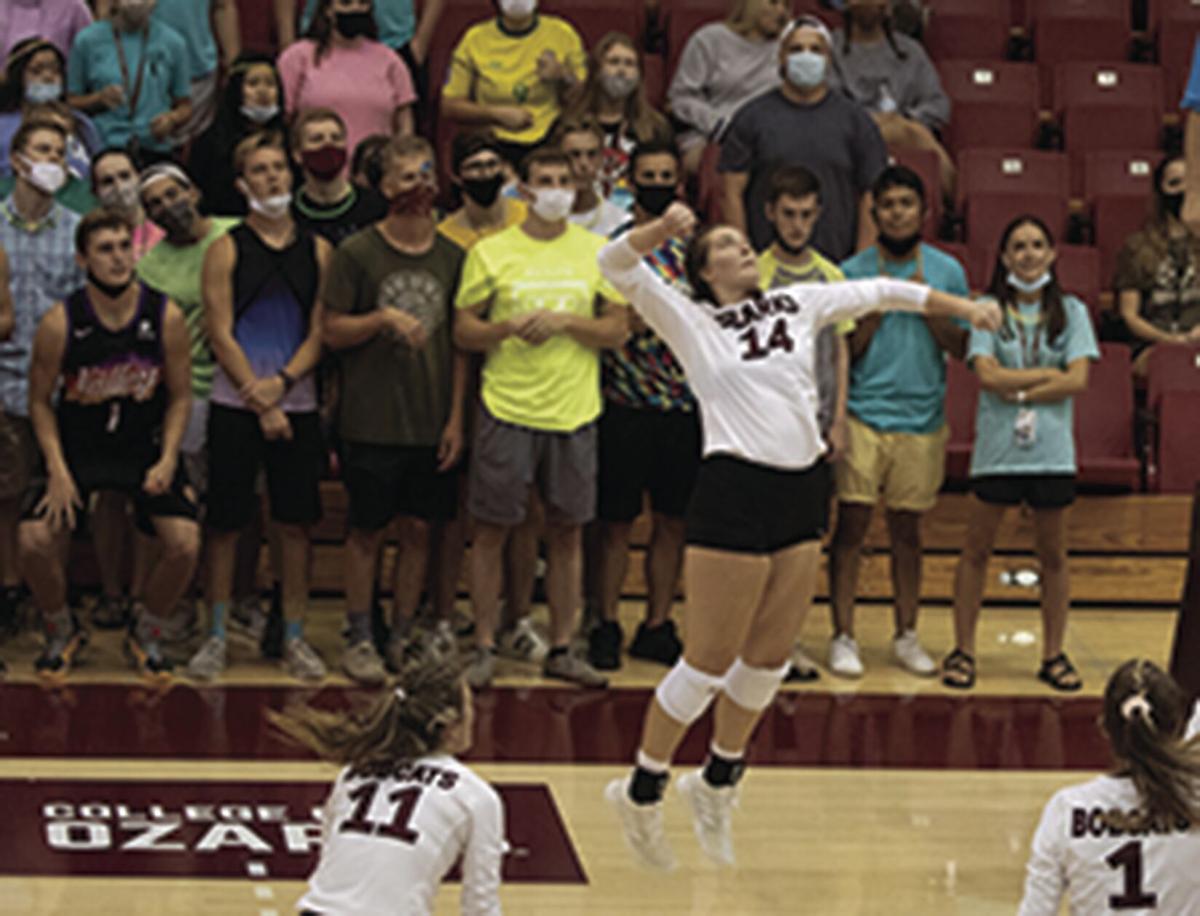 Abi Menzies goes up for the ball and secures the kill. 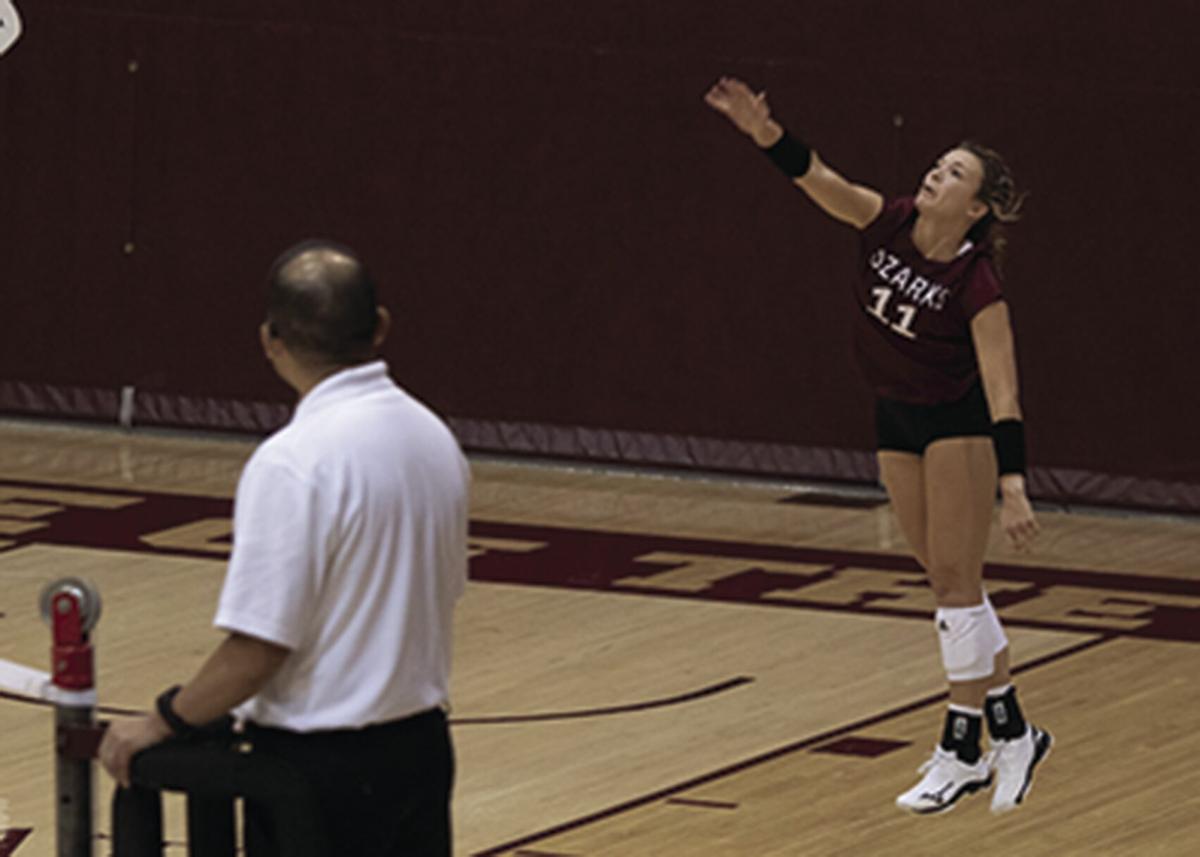 Abi Menzies goes up for the ball and secures the kill.

The Lady Cats opened play against the Evangels of Mid-America Christian University. After playing close through the mid-way point of the first set, the Evangels put together a 12-3 run to take a commanding lead (21-11). The Lady Cats began to chip away at the lead with solid play at the net by Abi Menzies and Ryley Thixton. With a couple of Evangels errors, the Lady Cats were able to pull to within six, 24-17, but MACU kept the pressure on and won the first set 25-17.

The second set was highly contested from start to finish. With both teams fighting to win rallies, the Lady Cats were constantly trailing. With the score tied at 17, Kiley Counts found the Evangels’ side of the floor to give the Lady Cats their first lead, 18-17. The lead was short lived, however, and the Evangels scored three unanswered points to force a Lady Cat timeout, trailing 20-18. The Evangels scored one more point before the Lady Cats could break serve. Three unanswered points off Mica Chadwell serves tied the score at 21 before MACU could win a rally. Coach Muchenthaler called another timeout, with her squad trailing 22-21 and in danger of falling behind, 2-0. The Lady Cats scored the first point out of the huddle but MACU answered on the next rally. The Lady Cats determination to not give in gave them the next two points and forced an Evangels timeout, leading 24-23. MACU scored the next point and it was up to C of O to answer the challenge. Each team kept the pressure on and the back and forth battle continued. The Lady Cats scored to go up 27-26 with another opportunity to seal the set two win. Kiley Counts delivered a serve to the Evangels and after short rally, the Evangels’ return error gave the Lady Cats the win.

Looking to continue the momentum in set three, the Lady Cats needed to maintain their focus and determination. It appeared Set 3 was be a carbon copy of the previous set. The two teams traded points and neither team could build a lead. With the score tied at three, the Lady Cats put together a 3-0 run to take a 6-3 lead. MACU didn’t back down. The Lady Cats fought to maintain their three-point advantage and led 13-10 at the mid-way point. MACU continued to fight back, however, and scored four unanswered points to take a 14-13 lead, forcing a Lady Cat timeout. The timeout was not enough to slow down the Evangels’ attack and they soon led 18-13. Coach Muckenthaler called another timeout to try and change the tide. With the momentum clearly on their side, MACU continued their run and took set three, 25-14.

With their backs against the wall in the best of five match, the Lady Cats needed to create a momentum shift, and it had to be sooner, rather than later. The Evangels had other plans and jumped out to an early 5-0 lead in set four. The Lady Cats continued to fight and pulled within one, 8-7 before MACU put together another run to lead 13-7. The Lady Cats called a timeout to regroup and try to disrupt the MACU rhythm. The Evangels, however, had found their groove and continued to pile on the points. Another 5-0 run forced another Lady Cat timeout as the set was slipping out of control, trailing now, 18-7. The Lady Cats mounted a comeback bid but it wasn’t be enough. MACU won set four, 25-13, and the match 3-1.

The second match of the weekend featured the Lady Bobcats taking on the Bulldogs of Jarvis Christian College.

The Bulldogs showed resilience in the second set and quickly took a 3-1 lead. As the Lady Cats struggled to put points on the board early the deficit grew, and they found themselves in a hole. Strong play at the net by Abi Menzies and Bailey Chamberlain fueled a rally and the Lady Cats took their first lead of the set, 8-7. After a delay in the action due to scoring issues, The Lady Cats put together a 5-0 run to lead 15-10. Jarvis continued to make it a close game. The teams traded points to a 17-17 deadlock. Neither team wanted to give up ground and they continued to trade points to a 22-22 tie. The Lady Cats continued to keep the upper hand, answering each Bulldog challenge. The Lady Cats then scored the final three points to take set two, 25-22.

In set three, both teams picked up where they left off in the previous set…trading points rally after rally. Jarvis was able to take an 8-5 advantage early, but the Lady Cats charged back with four unanswered points to take the lead. The back and forth action continued until the Lady Cats built an 18-14 lead. The Lady Cats continued applying pressure and finished strong for the 25-20 win, completing the sweep in their final match of the day.

Jamarye Joiner, others back for Arizona; ASU missing several regulars for Territorial Cup

C of O vs. Centenary College

The Lady Cats resumed play at 10:30 Saturday morning facing Centenary College. After a back and forth battle to a 7-7 tie, the Lady Cats opened up a 7-1 run with service points by Kiley Counts and kills Ryley Thixton and Bailey Chamberlain. Centenary answered with three straight points, but the Lady Cats continued to apply pressure. An Abi Menzies kill gave the Lady cats a 19-14 lead. Centenary tried to challenge, but back-to-back kills by Ryley Thixton sealed the 25-18 win.

Set 2 was all C of O as the Lady Cats dominated from start to finish. A 4-1 run to open the set gave the momentum to the Lady Cats. Centenary tried to stay in contention, but the Lady Cat attack was too strong. After building a 13-5 lead, the Lady Cats took over and scored eight unanswered points. By the time Centenary broke the Mica Chadwell serve, the lead was built to 21-6. The next four points were secured by the Lady Cats and set two was in the win column, 25-6.

Set three was another dominant performance by the Lady Cats. After Centenary rattled off the first three points of the set, C of O took over. Slamming down point after point, the Lady Cats took a 14-4 advantage. Centenary attempted to hold off the Lady Cat charge, but it was just too strong. The Lady Cats quickly built a 20-9 lead. Centenary could only muster one more point before the Lady Cats sealed the win on a kill by Bailey Chamberlain, 25-10.

C of O vs. Lyon College

After a long span between matches, the Lady Cats were set to open the final match of the weekend. Facing the host, Lyon College Scots, C of O was hoping the momentum from the earlier match would carry over. Unfortunately, that was not the case. The Lady Cats found themselves in a close battle from the opening serve. Points were traded back and forth between the two teams, but Lyon had the edge. Midway through set one, Lyon held a 14-9 advantage and it appeared the Lady Cats were in trouble. The Scots continued to apply pressure, but the Lady Cats were not ready to concede. After fighting back to within three, 20-17, Lyon started to feel the momentum swinging to C of O. Three straight errors by the Scots tied the score at 21. Trading points was  the pattern for the next five rallies, and it seemed as though the Lady Cat comeback bid was thwarted. Trailing 24-23, and the set on the line, Coach Muckenthaler called a timeout. The motivational monologue did the trick and the Lady Cats came out of the huddle with renewed determination. Back to back kills by Abi Menzies, assisted by Morgan Austin, gave the Lady Cats their first lead of the set, 25-24. After a Lyon College timeout, Brooklyn Crawford’s well-placed serve forced an attack error, and the Lady Cats took the set 26-24.

Set 2 started much the same as the first set. The teams traded points early on, with the C of O, this time, holding the edge. Lyon was determined to bounce back from the set one loss, but the Lady Cats continued to build on their slim lead. The Scots could not seem to gain ground and momentum was clearly building for C of O. As the Lady Cats scoring continued, Lyon needed a timeout to regroup, trailing 15-10. The timeout seemed to work in favor of the Lady Cats, however, and they continued to add to their lead. Point by point, the lead grew and back to back kills by Ryley Thixton and Abi Menzies finished Set 2 with the win, 25-15.

The Lady Cats were in search of their third sweep of the weekend and the Scots had work to do if they were to keep that from happening. The Scots accepted the challenge and quickly shifted the momentum. After playing to a 3-3 tie early in the set, the Scots went on a 9-3 run to build a 12-6 lead. They continued to fight for the set and slowly added to the point spread. The Scots broke the Lady Cat string of sweeps by taking set three, 25-15.

It looked as though Lyon was now ready to challenge and push the match to a fifth and deciding set. They took the early lead in set four and maintained a slim advantage through the mid-way point. Back to back kills by Ryley Thixton and Brooklyn Crawford, combined with a Scots error, gave the Lady Cats their first lead, 12-11. The battle was intense the rest of the way. Neither team wanting to give up ground, points went back and forth. Playing to a 22-22 tie, the Scots were answering every move by the Lady Cats. Points were traded again, and the 23-23 score was adding tension on both sides of the net. The Lady Cats forced back-to-back errors and took Set 4, 25-23, and the match 3-1.

The Lady Cats finished 3-1 on the weekend and improved their overall record to 5-1. The Lady Cats were led by Ryley Thixton’s 57 kills and 66 digs, Abi Menzies’ 47 kills, and Morgan Austin’s 136 assists and 43 digs. The Lady Cats will be back in action Tuesday night at home in a rematch with the Lyon College Scots. Game time is set for 7 p.m. at the Keeter Gymnasium.