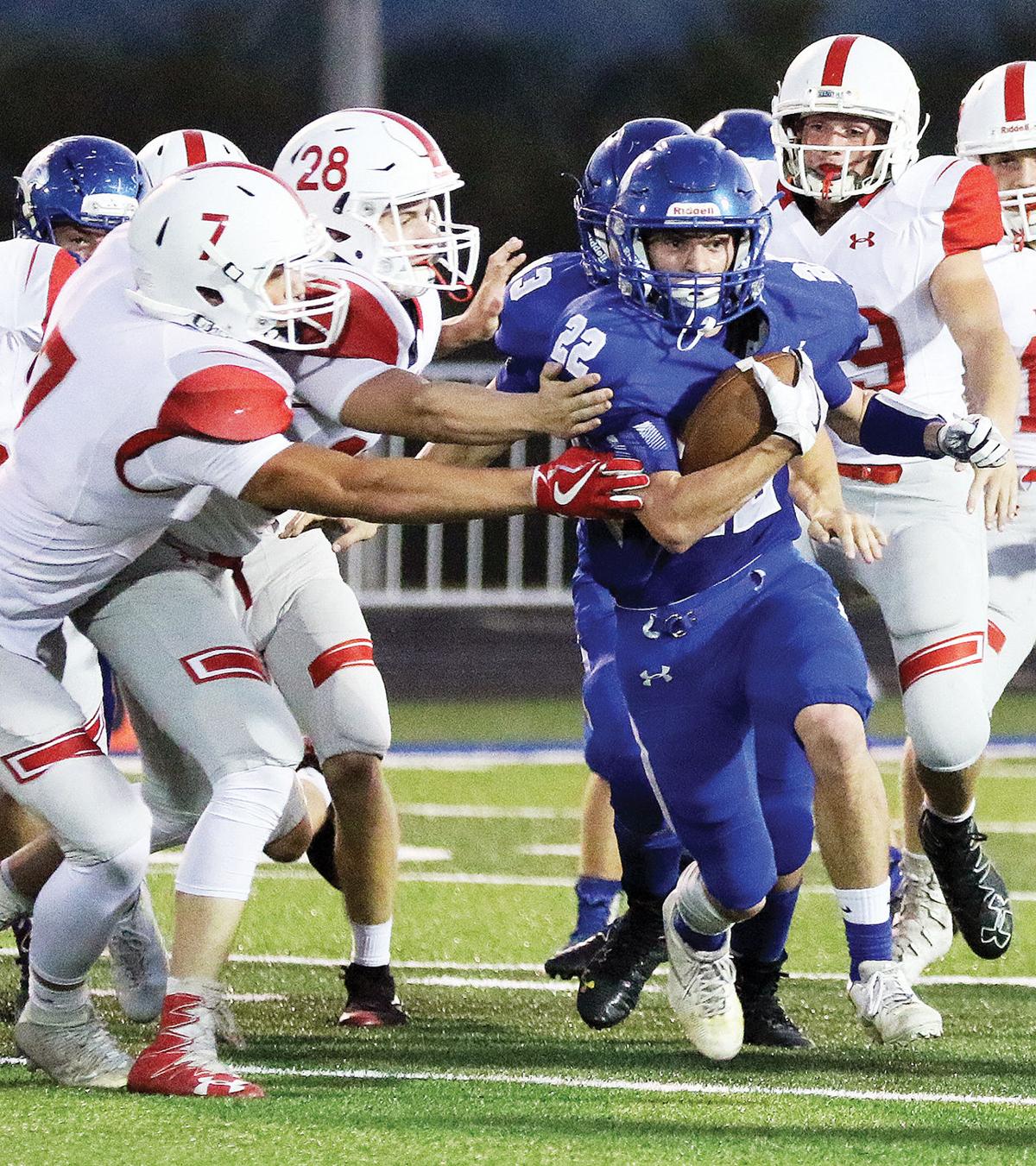 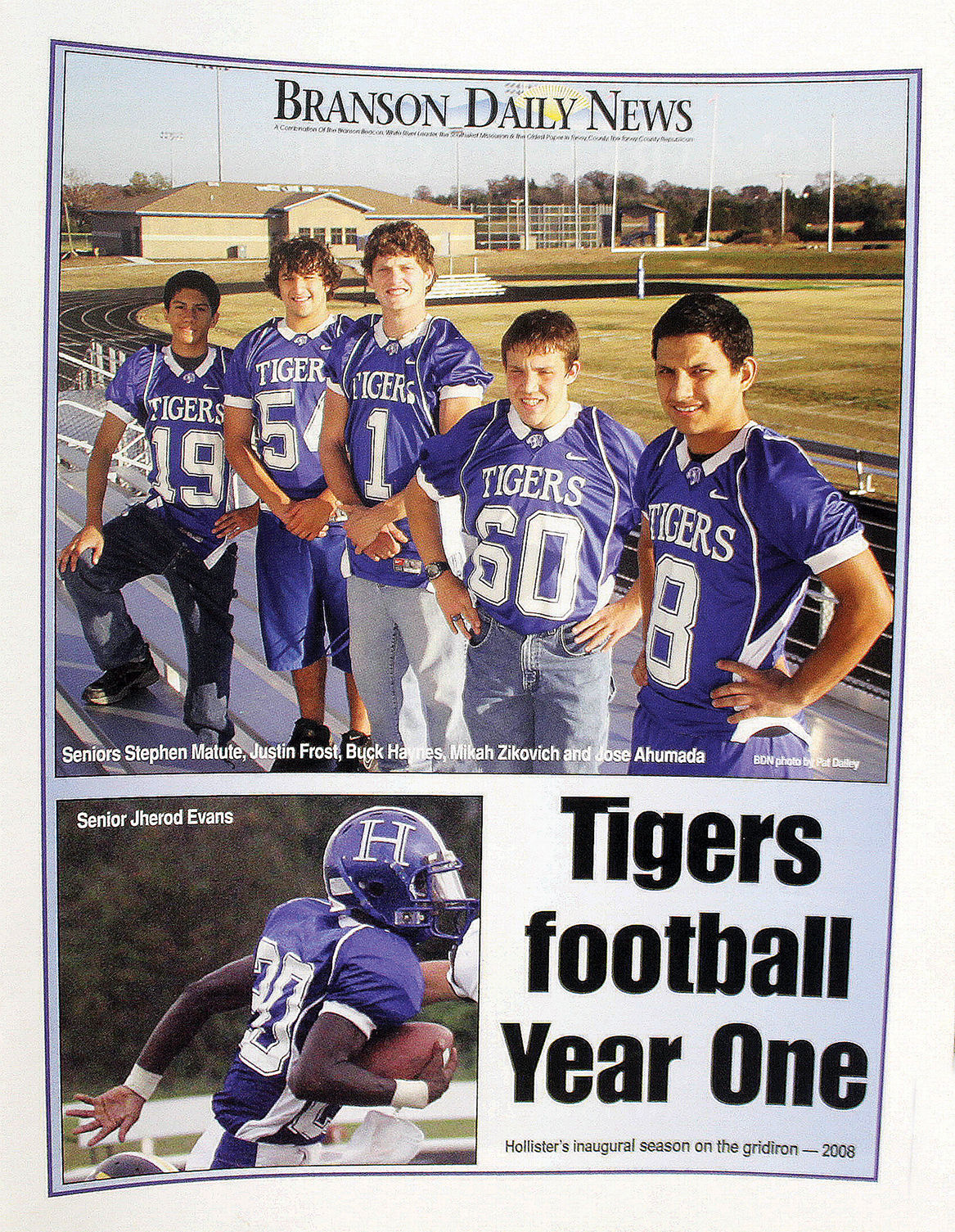 Jacob Hamon’s listing of his 1,422 Facebook friends include many former Hollister players who suited up for the Tigers during his six seasons as an assistant coach or the four seasons he has been the program’s head coach.

He learned on Facebook this week of the birth of Macie Scarlett Morse, daughter of 2012 Hollister grad Zane Morse, a record-setting wide receiver for the Tigers.

“That does my heart good,” Hamon said. “Zane is a special young man. You can tell how special because he’s now serving in our military (as part of the infantry for the U.S. Army and based in Wahiawa, Hawaii). He's living life at full speed.”

By all accounts, it’s been a speedy 10 years, a whirlwind if you will, of Hollister football. This is indeed the 10th season on the gridiron for the Tigers dating back to their first two season as a jayvee program only. Their inaugural year of varsity ball was 2010.

“They say time flies,” said Kevin Roepkle, Hollister’s first head coach. “When (Hollister school officials) called me about (saluting the program's 10 years of football), I was surprised that it has already been 10 years. It seems like just yesterday we were getting started.”

Hollister is acknowledging its past teams by welcoming all former players to Friday’s Homecoming game with Springfield Catholic. Anyone who played for the Tigers from 2008-2016 will serve as an honorary captain for the contest.

Morse, who still holds school records for catches in a game (10) and a season (37) is one of many former players who stand out while looking back on 10 years of Hollister football. The program’s records board still includes names from the Tigers’ first varsity season such as quarterback Brandon Mahoney (single-season rushing record of 841 yards).

Other records that have stood the test of time include quarterback Kyle Sheppard’s 11 rushing touchdowns in a season, quarterback Cody Ballard’s 29 completions in a game and 145 in a season and Chris Maric’s 67 career receptions. Also, Cody Canote’s 95 solo tackles in a season is a mark that may be around for a great while.

Just last week, Jackson Bekemeier surpassed Ballard’s previous career record of 254 completions. Bekemeier has made good on 255 passes over the past three seasons.

Hamon dreams of what an All-Time Hollister Team would look like.

“You put them all together and that would be a heck of a team,” he said. “We’ve had some nice looking kids come through here.”

Hamon has been at Hollister since the beginning, having graduated from Evangel in 2008 and hired shortly after to serve on Roepke’s original staff.

“I’ve been here for every snap, every practice and everything else we’ve ever done,” Hamon said.

Both Roepke and Hamon point to Hollister’s finish in 2010 as one of their top highlights. Under the Missouri State High Schools Activities Association’s former playoff system in four teams made up each District, the Tigers bounce back from a loss to Strafford and knocked off Fair Grove and Ash Grove to make the playoffs.

“There ended up being a tie-breaker, with three of us being 2-1,’ Roepke said. “I don’t remember who called, but when we got on the bus, we called to find out we definitely were in the playoffs. It was surreal.”

“That was a great night,” Hamon said. “Everybody came running onto the field after the game. It was a lot of fun. Coach Roepke cut out a piece of the turf and brought it back to Hollister.”

Roepke adds the 2010 Tigers also shined through their character.

“On the field, our top highlight was to make the playoffs right out of the chute,” Roepke said. “Off the field, it was special that the Southwest Missouri Football Officials Association voted us, out of all classes, their sportsmanship award winner.”

Hollister’s 5-5 team from a year ago featured stalwarts along the offensive and defensive lines in Brandon Gandy, Tyler Gross, Patrick Schultz and Zach Crawford, to go along with elite skill-position players in Bekemeier and Derek Morris.

Those who have been around the program from the get-go would argue Hollister’s first team has actually been its best to this point.

The Tigers played jayvee ball only in 2008, but allowed freshmen through seniors to strap on shoulder pads for the first time. Lo and behold, stars emerged in running backs Jherod Evans and Buck Haynes, linebacker Justin Frost, linemen Randall Bonnell and Randie Roepke, quarterback Dalton Silvey and wide receiver Josh Fletcher. The team also included future standouts in lineman J.R. Looft and running back Peter Wittl. The latter is the answer to the trivia question: “Who scored Hollister’s first touchdown?”

Hollister rolled to a 7-0 record.

“There were a lot of positives and excitement from day one,” Hamon said. “That was a good bunch of kids. They complemented each other nicely and Jherod could do some scary things the open field. Justin is still one of the best players I’ve ever coached. He had a natural nose for the ball and a great motor. You couldn’t stop him.

“Obviously, they didn’t know much about the game. But we were blessed with some real nice talent. We had to teach a mentality and toughness, that football is a commitment and an every day thing. It’s not about having practices two or three days a week. Football is hard work and a grind every single day.”

“There were good athletes on that first team and we had a great turnout for a first-year program,” Kevin Roepke said. “We were big up front, ‘Mook’ (Evans) was a game changer and we had a solid QB in Dalton.”

The only contest in which Hollister was tested was its home opener versus Pleasant Hope.

“We were tied 7-7 at halftime,” Roepke said. “Our principal, Chris Ford, came to me at the half and said, ‘You are going to pull this out aren’t you?’ They had a big fireworks show planned after the game.”

Roepke came to Hollister after a successful stint coaching at Strafford. It was a move that surprised many.

“I enjoyed the challenge of being at the ground level and building something,” Roepke said. “The goal of coaches is to build strong men or women and make them solid citizens who are going to do something positive in your community. You’re never going to hit 100 percent. But for the most part, that’s been one of the most successful points of what we’ve done at Hollister.”

Roepke is also proud to have one of his former assistants take over upon his resignation after the 2013 season. Early on, Roepke felt Hamon had what it took to lead a program.

“He reminded me so much of Tim Hester when I was at Strafford,” Roepke said of the current coach of the Indians. “Tim was my defensive coordinator. They’re both former college players and football men. Also, they both know how to push kids to their limits without going past it. It’s a gift they both have.”

Hamon feels he couldn’t have asked for a better mentor. He added he also learned much from veteran coaches the likes of Larry Mueller and Mark Vert.

“Kevin had a dream and a philosophy,” Hamon said. “He was a pioneer for us. I wouldn’t be here today without him. He got it started and built a great foundation. Our hopes and dreams were to turn young men into men. We’ve had coaches pour their hearts and souls into our kids.”

Looking ahead, Hamon is encouraged about Hollister’s future.

“We’ve got some nice kids coming up through our program and the game of football is being taught here now at every level from grades K-12,” he said. “We have flag football and youth football. Every single night there is football being played at Hollister. When I walked in here on day one, I don’t think any of us had hopes or dreams of that. It’s a breath of fresh air.”

A history buff, Hamon has the same excitement looking back on Hollister’s fortunes. His plans to salute the Tigers’ past is taking shape in the hallway leading to the team’s lockers at the school’s field house. Team photos from 2008-2016 line the hallway.

“We can see all the kids who have went through here and think of all the hard work that has been done,” Hamon said. “I’m a history guy and we are trying to support and honor our history. I feel blessed to honor our past.”

He’s relishing the chance to renew acquaintances with former Tigers who make it to Friday’s game.

“I’ll definitely be around to shake those guys’ hands,” Hamon said. “I talk to Justin regularly. I see Randie (now a coach at Fair Grove) and Jherod every once in a while. I played on the same softball team with Buck over the summer. Dalton connects with me every once in a while to see how I’m doing. I saw Cody Canote the other night. He’s about to be a doctor. Randall is working with a Christian-based ministry on the East Coast.

“It’s always nice to see those guys and learn what they are doing with their lives now. I also have guys contact me on Facebook. We go back and forth and have nice conversations.”

Likewise, Roepke is anxious to learn what his former players are up to.

“I’m looking forward to seeing those guys,” he said. “You contact some of them on Facebook and such, but don’t see them personally. So, it will special to do that and catch up on how they’re doing.”