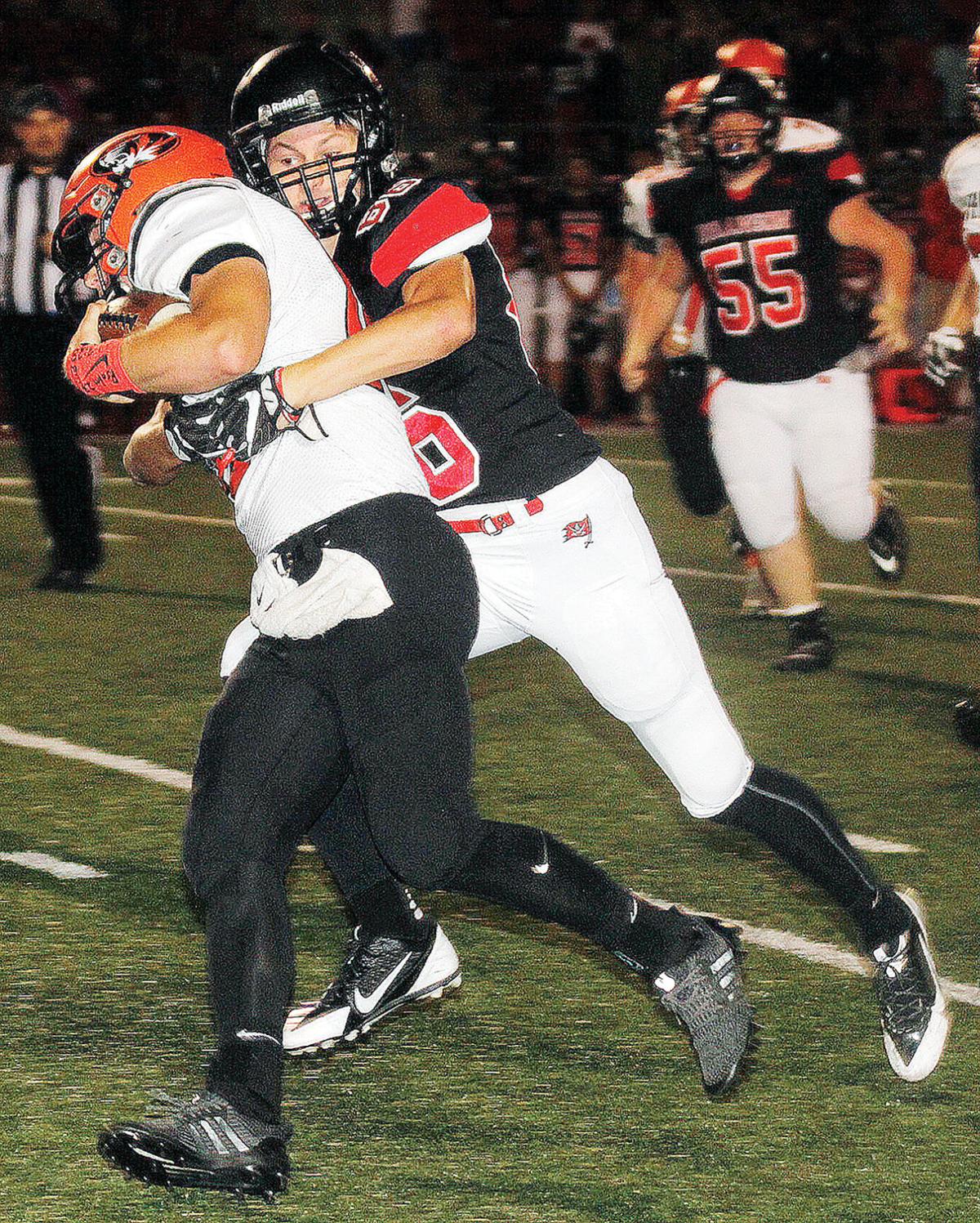 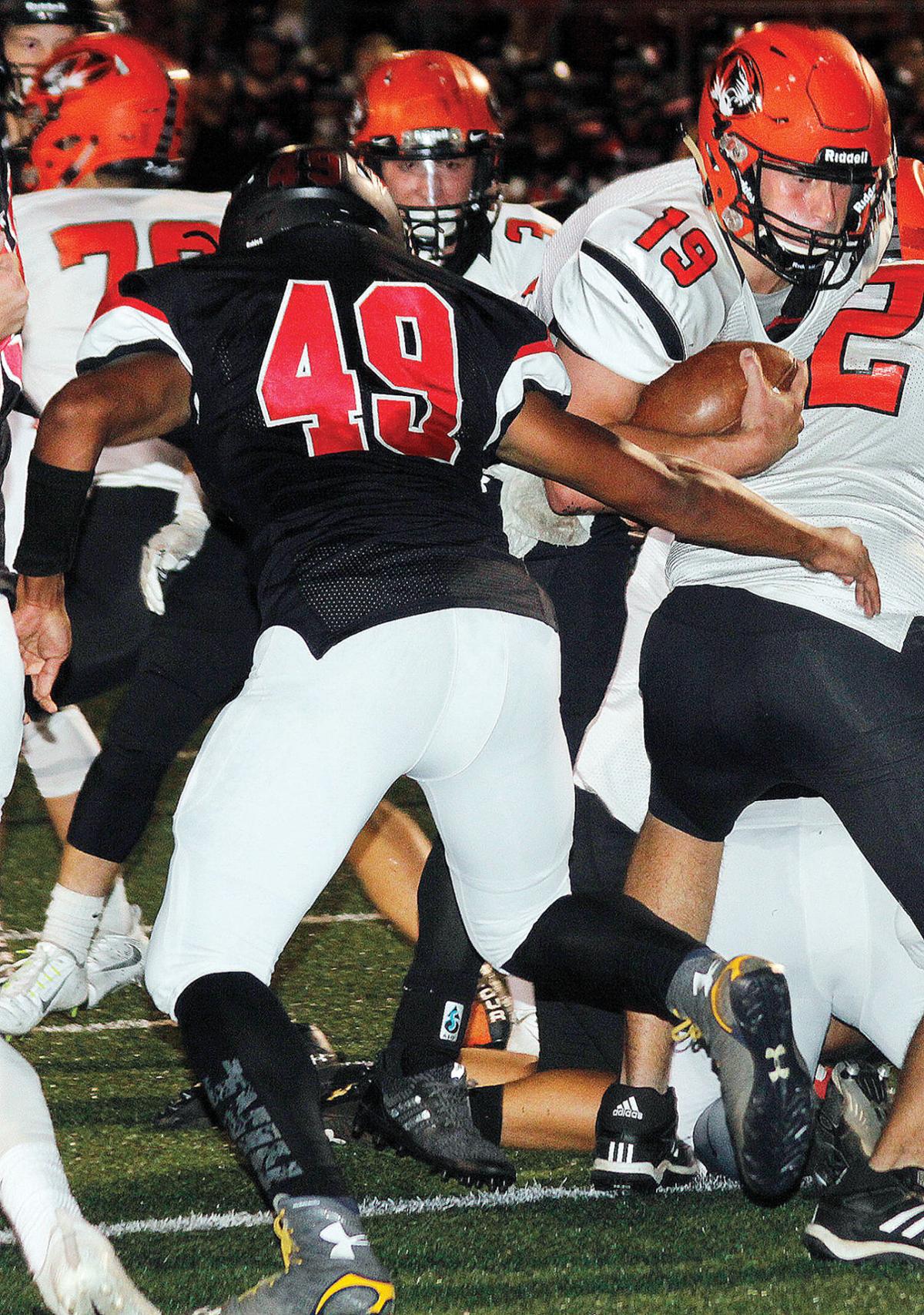 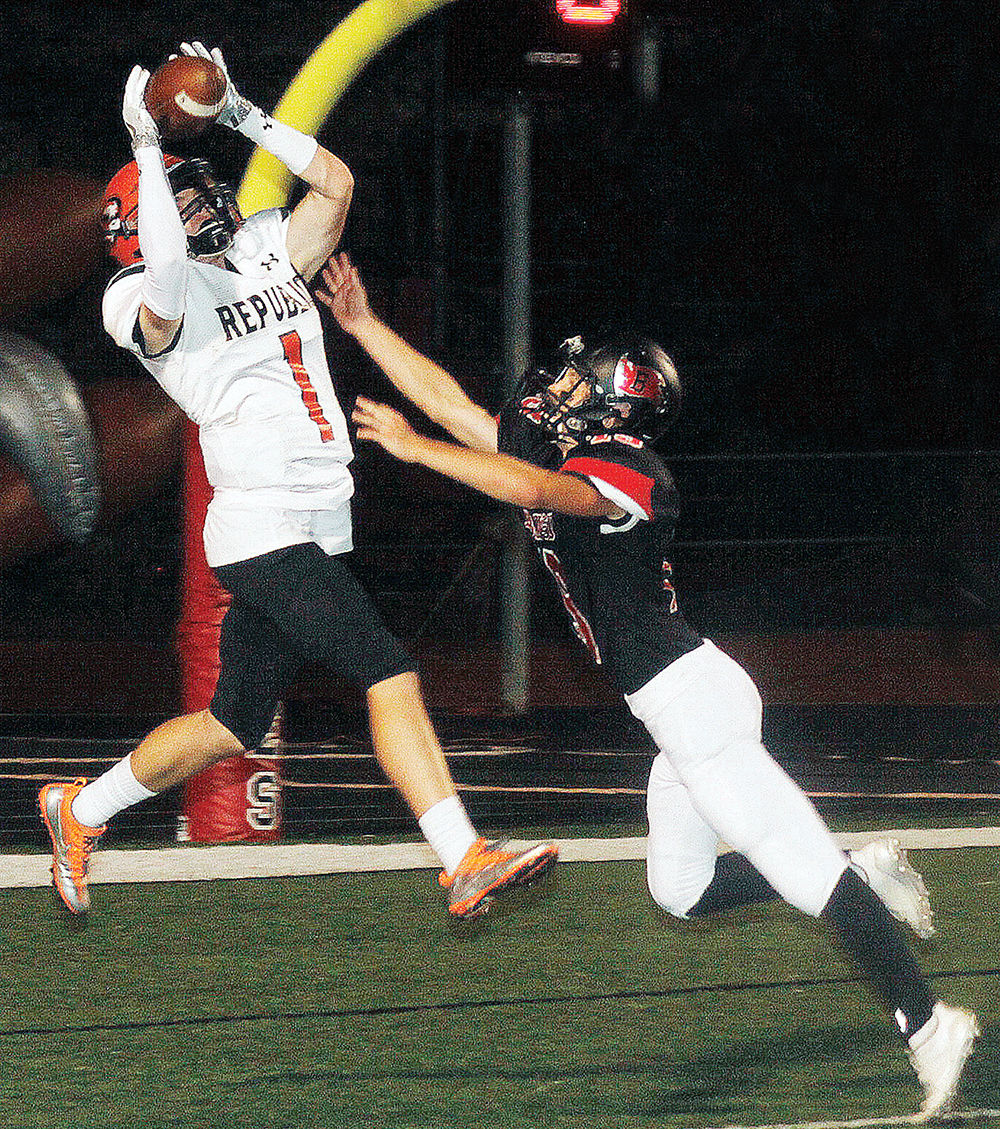 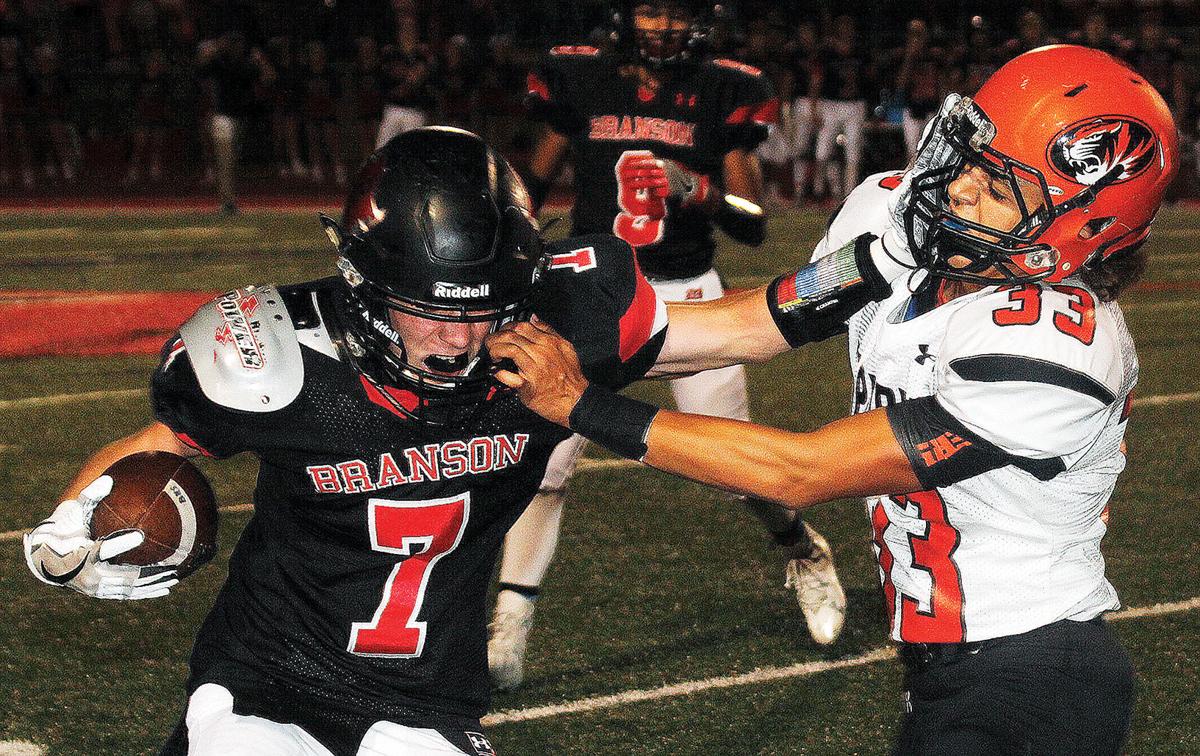 Branson's Ty Werling tries to get past Republic's Tyler Ghan on Friday. 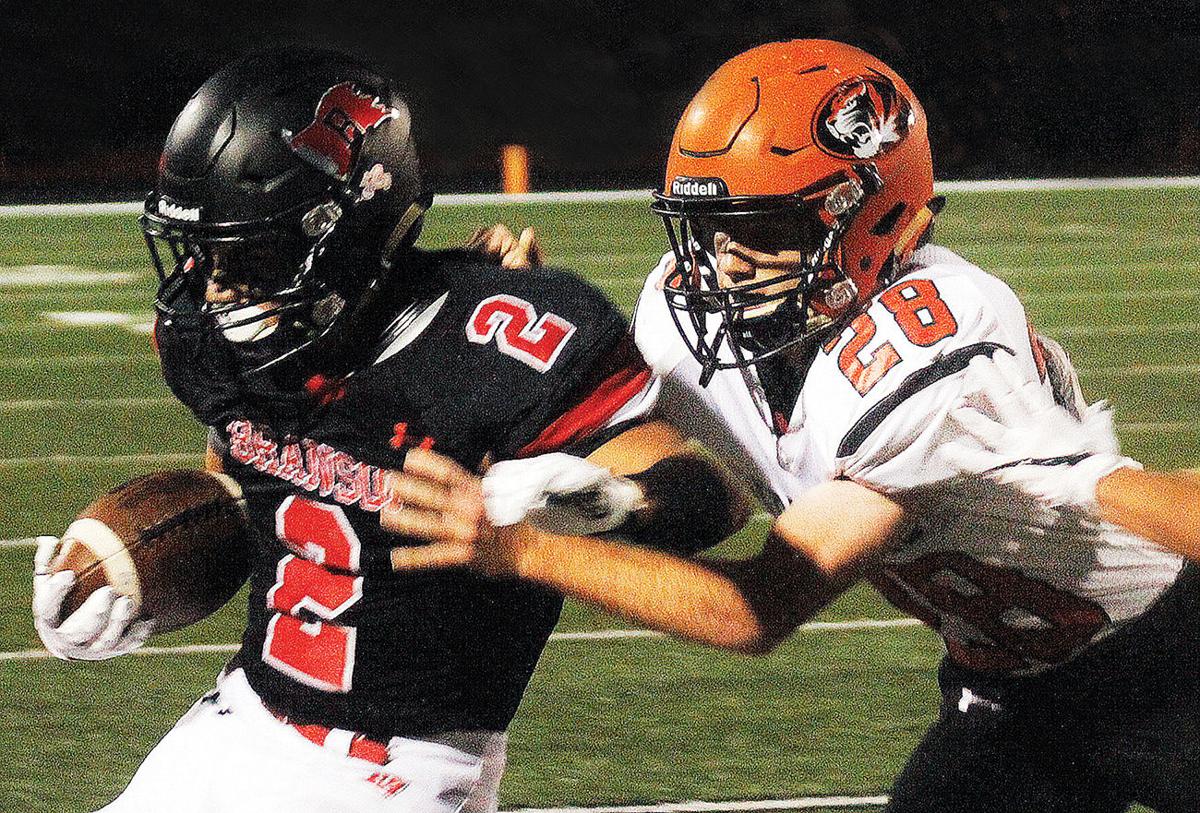 Branson's Karson Knudsen hauls in a reception versus Republic on Friday. 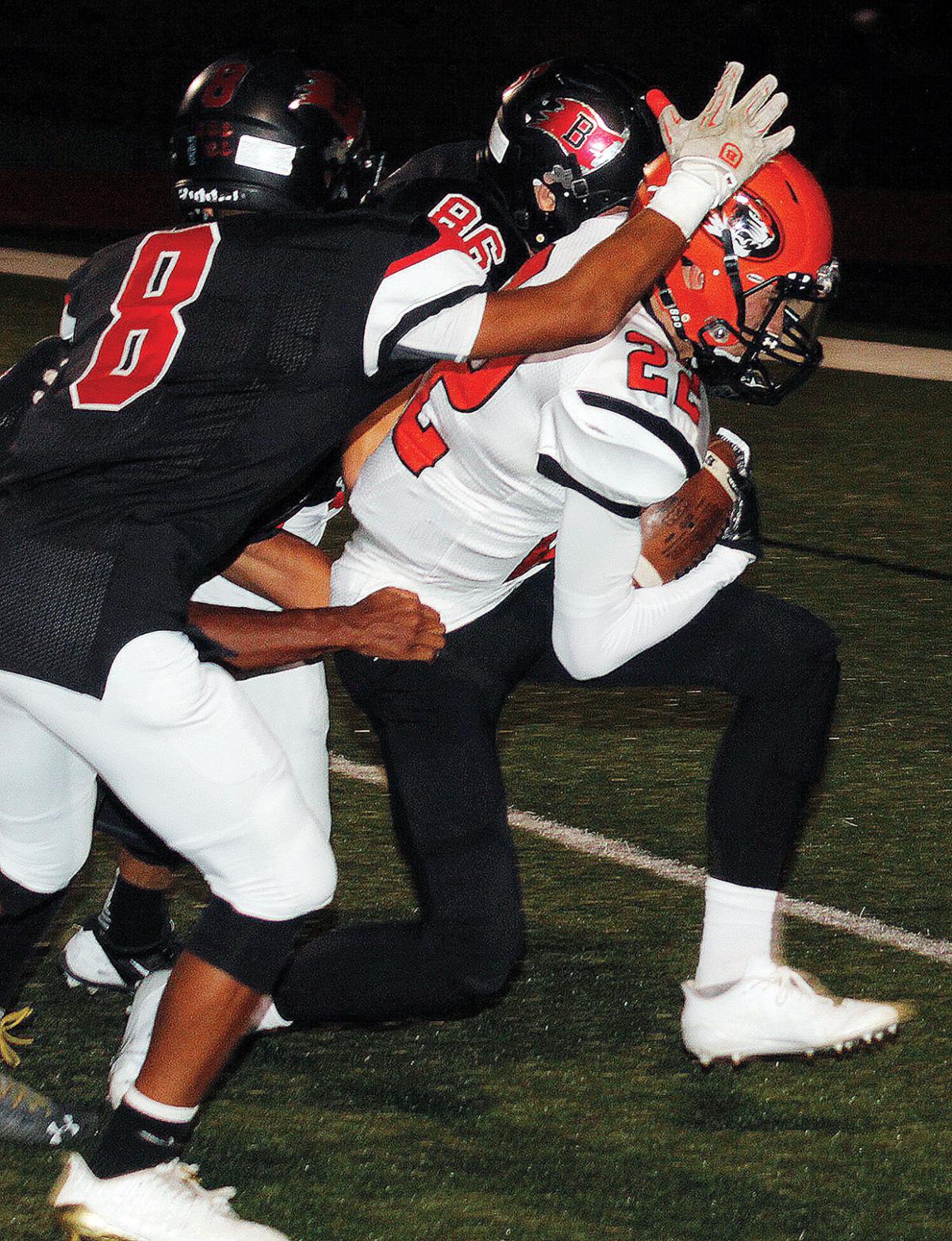 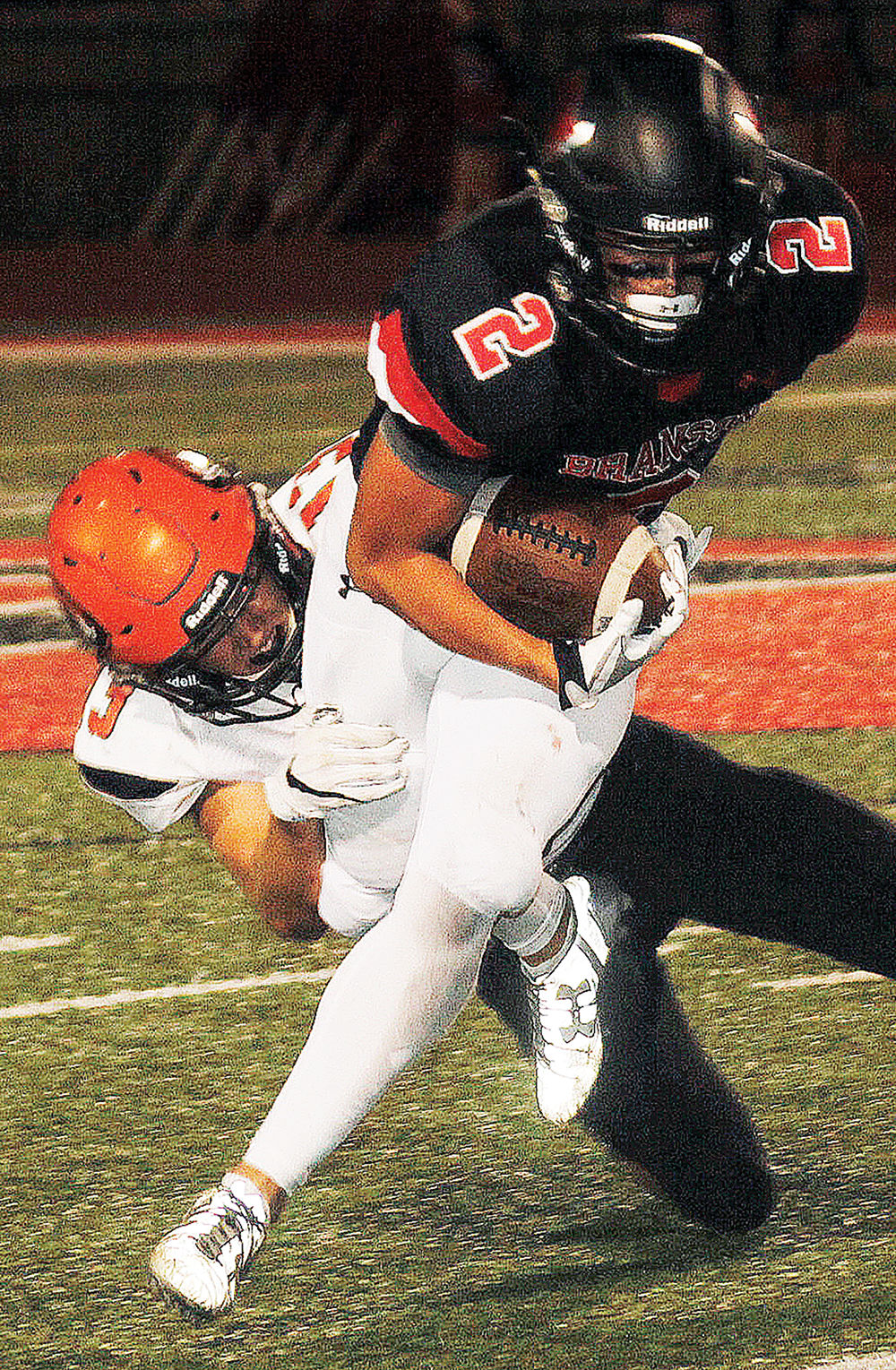 Branson's Ty Werling tries to get past Republic's Tyler Ghan on Friday.

Branson's Karson Knudsen hauls in a reception versus Republic on Friday.

Knowing Branson’s gameplan, wide receiver Karson Knudsen wouldn’t have guessed beforehand he would enjoy the greatest night ever for any Branson wide receiver during ‘Senior Night’ Friday at Branson Stadium.

“Our mindset was to run the ball,” Knudsen said. “But we had to change it up, so (quarterback Ryan Still) and I did what we do in practice, throw the ball and catch the ball.”

Knudsen and Still teamed for two touchdown passes. Knudsen even paired up with backup quarterback Gabe Sylvester for a third touchdown pass, earning Knudsen a place in Branson’s records book for the most touchdown catches in a game.

Problem was, Republic quarterback Ryan Watkins was also playing throw and catch for touchdowns to four receivers and the Tigers handed Branson a 56-35 whipping.

In a matchup that most in the know figured the Pirates would prevail, Republic burst out to a 17-0 lead and was up 31-7 at halftime.

Branson (3-4 overall and 2-4 in the COC Large Schools Division) tried to come back, but was guilty of three interceptions.

“We got down by quite a bit and I felt the only way to get back in it was try to get some big plays,” Pirates coach Anthony Hays said. “We got in a hole and had to do the whole pass-and-onside kick game. We had to air it out. But by then it was too far gone.”

Watkins had touchdown passes covering 13, 24, 42 and 76 yards. He also ran for two touchdowns.

“He’s a returning all-conference guy, so we knew he would be one of the better quarterbacks we would see,” Hays said. “He proved that.”

Branson has had more success against Republic in recent years than any other conference foe. Prior to Friday, the Pirates had won six of the teams’ last eight matchups.

But with Republic being in attendance at the Athletes U. Team Camp at Branson in July, both Hays and Knudsen saw enough of the Tigers to trust they would be formidable.

“I thought they had speed and that scared me a little bit,” Hays said. “Last week, they big-played Neosho for a win. So, I knew they had big-play potential. They have some speed we don’t have. I was hoping we could bottle that up and play some keep-away.”

“I thought they were explosive,” Knudsen said of his impressions of Republic in the summer. “(Watkins) had a good night tonight, their entire team had a good night and we didn’t play like we should have. We didn’t execute and fell short.”

Republic (3-4 and 2-4) scored on its first seven possessions, not punting until late in the third quarter.

Branson’s efforts to keep pace were thwarted by three picks and Hays pointed to a failed attempt at fourth-and-one at the Republic 26-yard line in the first quarter as a play that set the tone.

“Republic made the plays and we didn’t,” he said.

The Pirates have given up 156 points in their four losses and 34 in their three wins.

“The defense has been on the other side of this, so I’m not going to point fingers,” Hays said. “There have been games in which they got stops and we kept having to punt the ball. We’ve got to be in unison. We’re a team, it’s not offense and defense, it’s the Branson Pirates.

Knudsen’s three touchdown catches broke a mark that had stood since 1999. Jared Calovich was the first Pirate to catch two touchdown passes in a game. His record was tired by Wes Barton in 2004, Chase Westfall in 2006 and Luke Masters in 2015.

“It means a lot because it’s ‘Senior Night’ and I left everything out on the field,” Knudsen said. “Ultimately, though, I want to get the victory.”

“Karson has special talent, so it was nice to see him have a breakout game against a quality team,” Hays said. “He had a big night. I was proud of his performance, but more proud of his heart. He ignored the scoreboard and kept playing hard.”

Knudsen’s career-high night across the board saw four of his receptions cover a total of 172 yards. His 10 receptions for 249 yards tied one school record and set another. He matched Masters' mark with 10 receptions for a game and surpassed Masters' previous standard of 202 receiving yards in a game.

Branson’s loss cost the Pirates a chance to make up ground in the race for the top two seeds, a first-round bye and a home semifinal game in Class 5 District 4. District leader Springfield Glendale, second-place Lebanon and third-place Ozark all lost Friday. Branson remains in fourth place.

“We still have a lot of football left,” Hays said. “If we keep getting better, I think good things are down the road.”