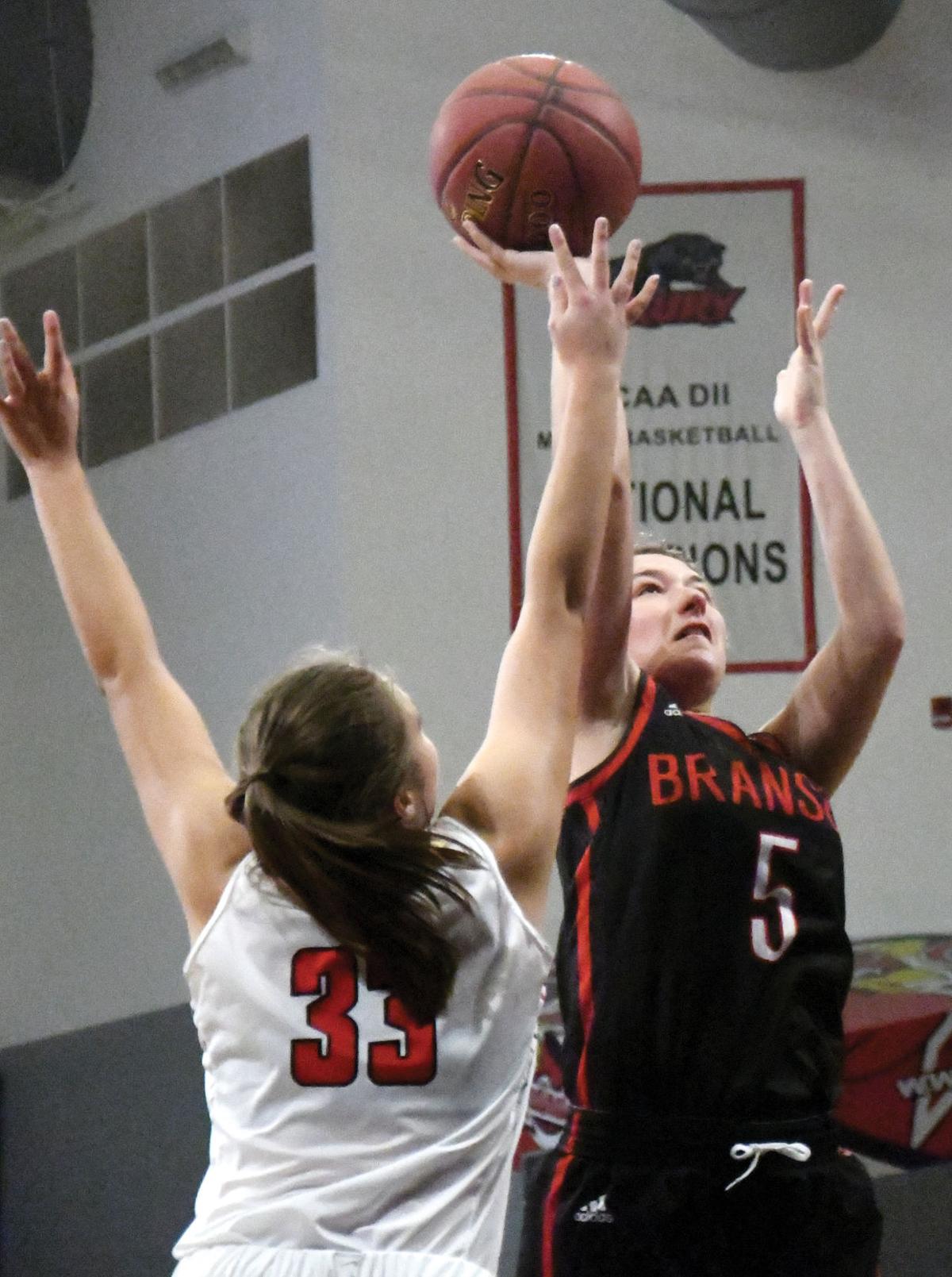 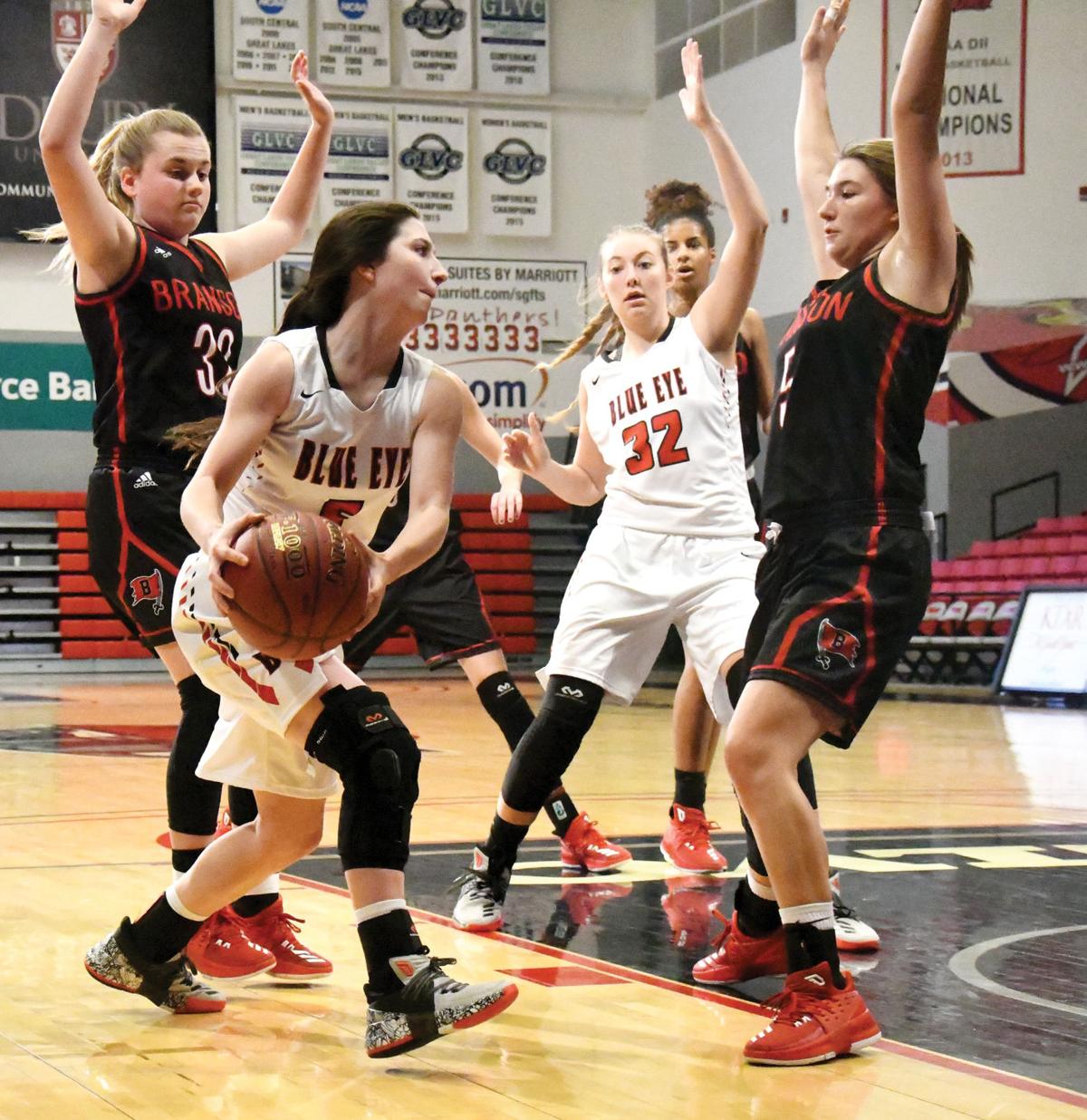 SPRINGFIELD – Priscilla Williams got by with a little help from her friends on Wednesday.

Branson High School’s high-scoring sophomore sensation had about the worst first half you could imagine in the second-round Pink Division at the Pink and White Lady Classic.

She picked up two fouls in the game’s first minute and three in the first half. At halftime, she had two points.

Williams bounced back to score 29 second-half points – her eighth game of 30 or more points in Branson’s nine games this season – and her teammates added some big plays as the Lady Pirates rallied for a 55-47 victory over Blue Eye.

“This is all part of the process,” Branson coach Kip Bough said. “I think a lot of people looked at the ranking and said, ‘Boom, they’re this good.’

“Any coach will tell you it’s a process of bringing kids together and learning each other and when the chips are down, this is where we’re going. That’s the process and what we’re going through.”

Class 2 Blue Eye was coming off a first-round victory over Class 5 Springfield Glendale in the tournament’s first round, and was poised for the upset of another Class 5 team, taking a 41-29 lead late in the third quarter behind the dominating play of Kohnnar Patton and Kenedi Larson.

Larson made back-to-back 3-pointers, and Patton added two of her own, then a fast-break layup to make it a 35-26 Blue Eye lead. Larson drained a pair of short baseline jumpers, the last one with about 5 seconds on the clock, and the Lady Bulldogs had a 41-29 lead.

But 5 seconds was too much time. Williams took the inbounds pass and raced downcourt, letting a long 3-pointer fly. It swished through, cutting the deficit to 41-32 and giving Branson a big momentum boost.

Williams continued her hot hand in the fourth quarter, almost singlehandedly bringing the Lady Pirates back. Branson opened the quarter with a 13-4 run to take the lead.

That made it a 48-45 Branson lead with 1:17 to play, and it’s where Williams’ friends helped close the deal.

Senior Lauren Garrison made a steal and was fouled when going up for a layup. She missed both free throws, but grabbed the rebound from the second miss and laid the ball in for a 50-45 lead.

Williams grabbed defensive rebounds on the next two Blue Eye possessions and made 3-of-4 free throws, and Garrison added a layup with 15 seconds left that sealed the victory.

Garrison finished with nine points, and along with fellow seniors Gracie Jaeger and Audrey Arnette, helped keep Branson within striking distance when Williams was on the bench because of foul trouble.

Arnette’s defensive pressure down the stretch helped lead to some Blue Eye turnovers and rushed shots, helping to key the comeback.

“I think the more they do it, the more trust there is going to build right there,” Bough said. “I’ve seen it with Lauren and Gracie, but it was nice to see Audrey come up big there.

“She locked on to them at the end. Those are the little things that add up. We were down, and she put a lot of pressure on that kid and sped them up a little bit.

It’s good experience for the team, Garrison said, to have other players step up and deliver in key situations when Williams is on the bench.

“It’s good for us, because it gives us different looks and it pushes us out of our comfort zone,” Garrison said. “Priscilla is a great player, but it pushes us to work together and see what we have for our strengths.”

For Blue Eye, it was a near-miss for a signature victory over a big-name school in the area.

But the Lady Bulldogs showed off a talented and deep team that figures to be a tough out against any team on their schedule.

Blue Eye’s “big three” of Patton (18 points), Larson (16) and Taylor Arnold (10) were virtually impossible to stop at times on Wednesday, with its outside shooting and good decision-making that led to easy scores on drives to the basket.

“We didn’t deserve it,” Blue Eye coach Ken Elfrink said. “We’ve got to find a way to win and finish out games like that. We’ll learn from our mistakes.

“We had a lot of little things that affected us, and we let it snowball on us. We got frustrated, and a couple of shots didn’t go in, and we relaxed on one end of the floor.”