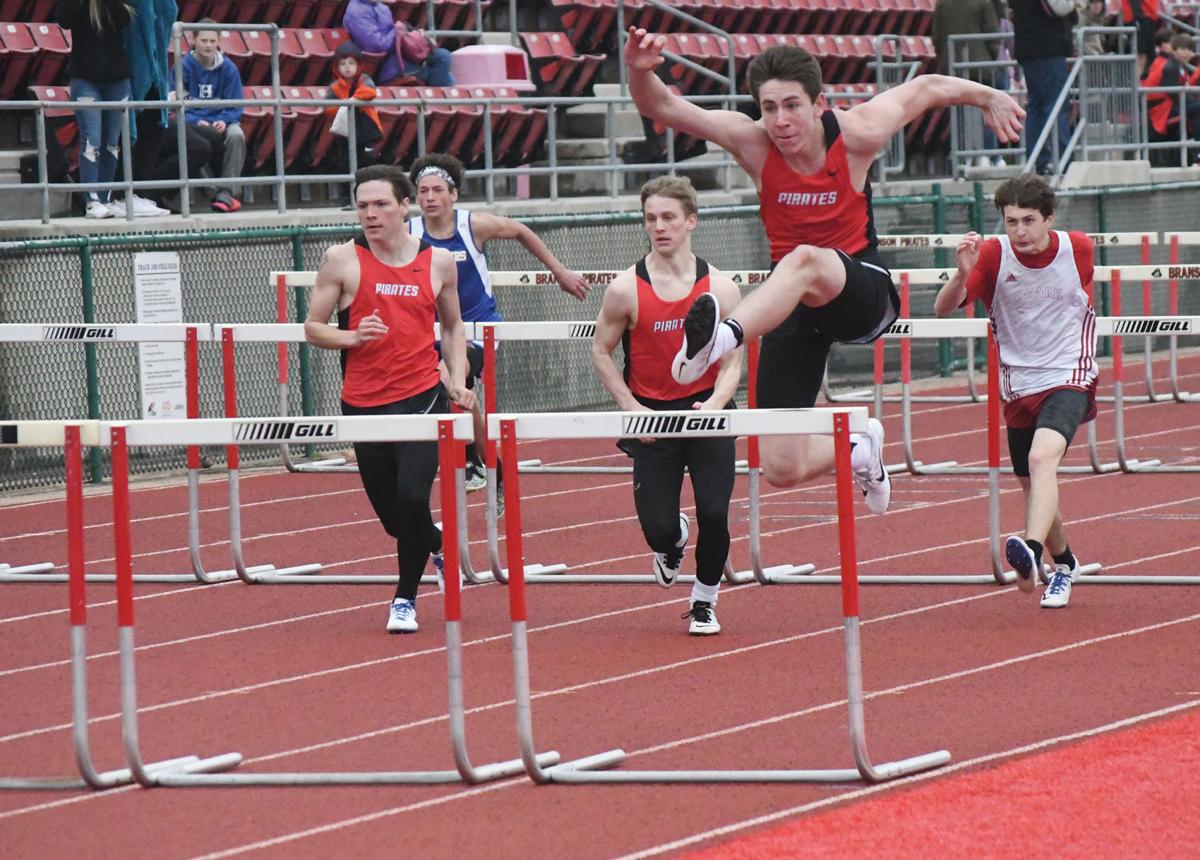 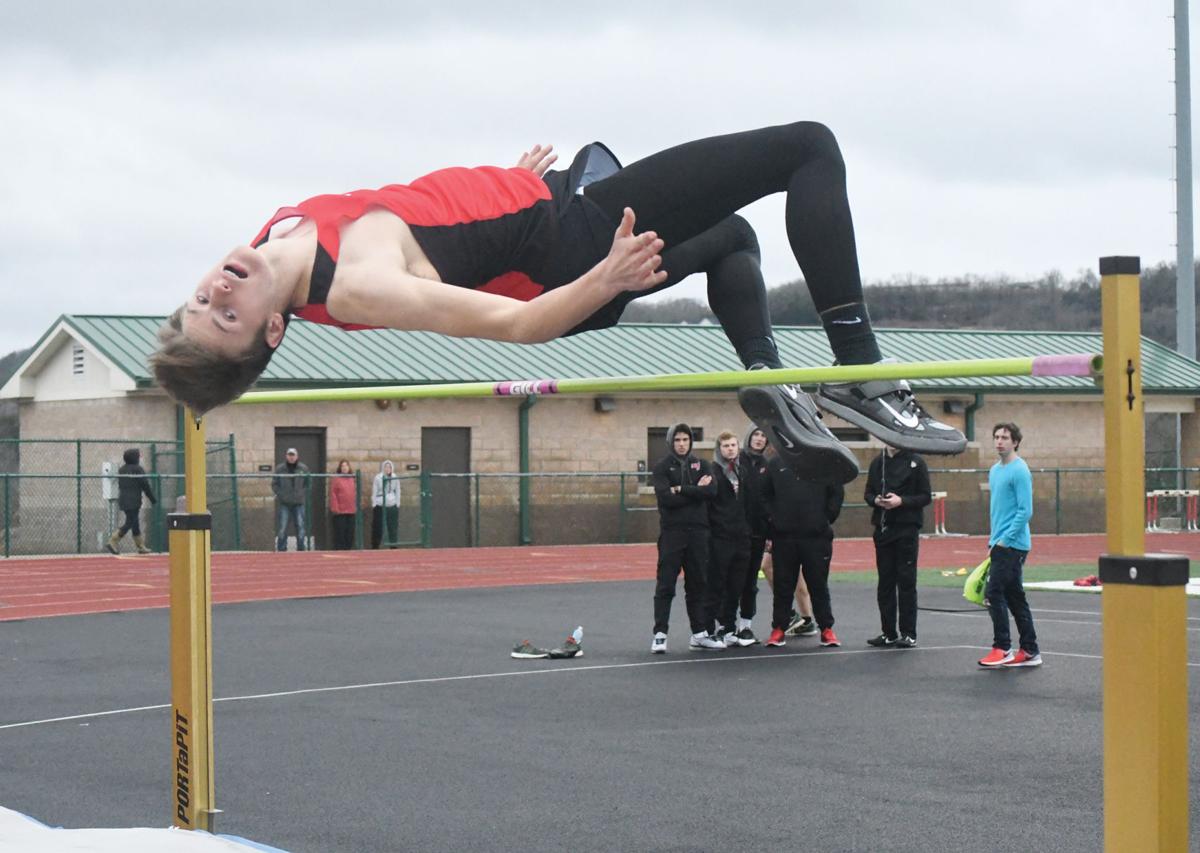 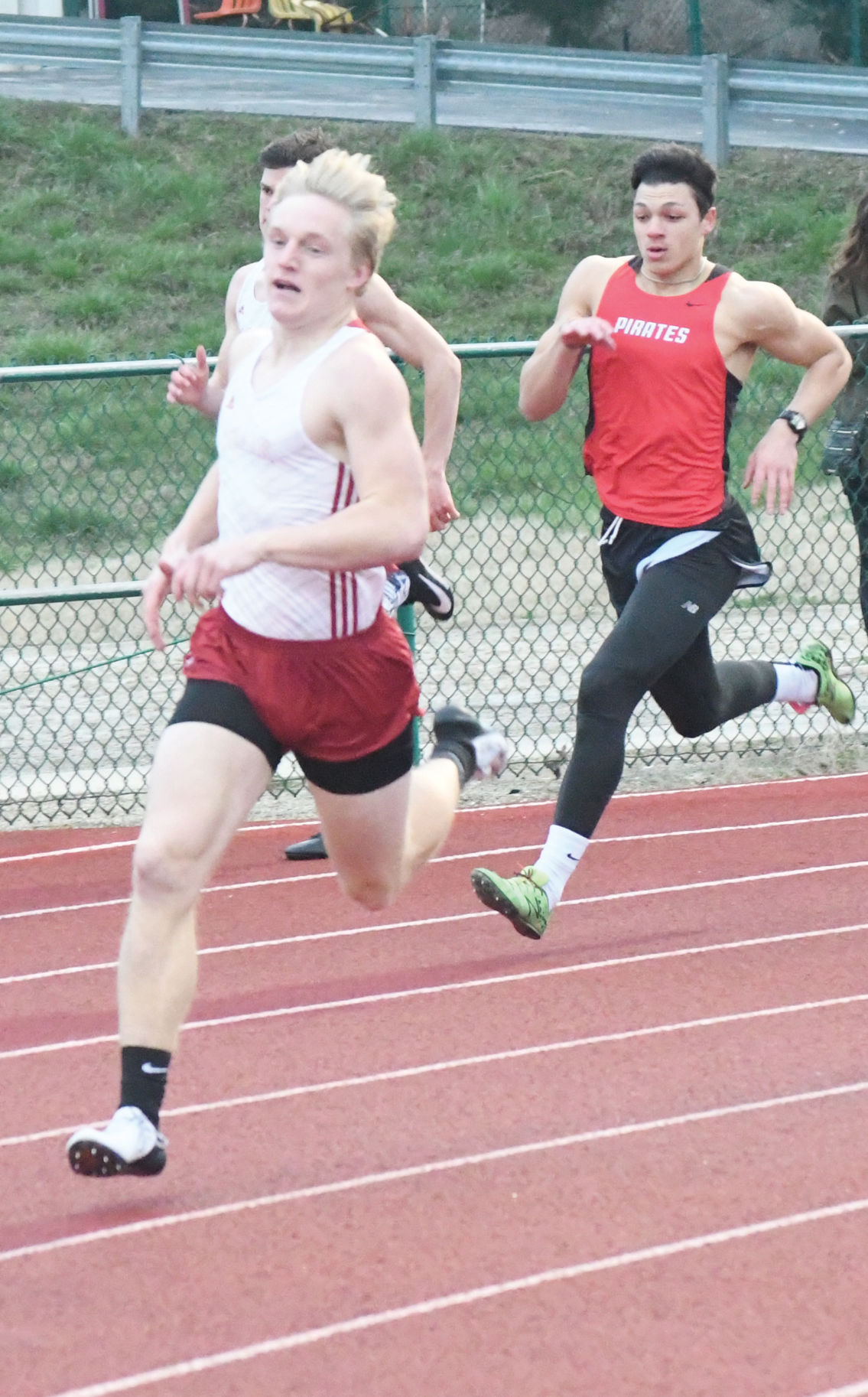 Branson senior Collin Pepper (right) sizes up his opponents as he hits the home stretch in the 400 meters at the Branson Invitational on Thursday night. Pepper finished third. 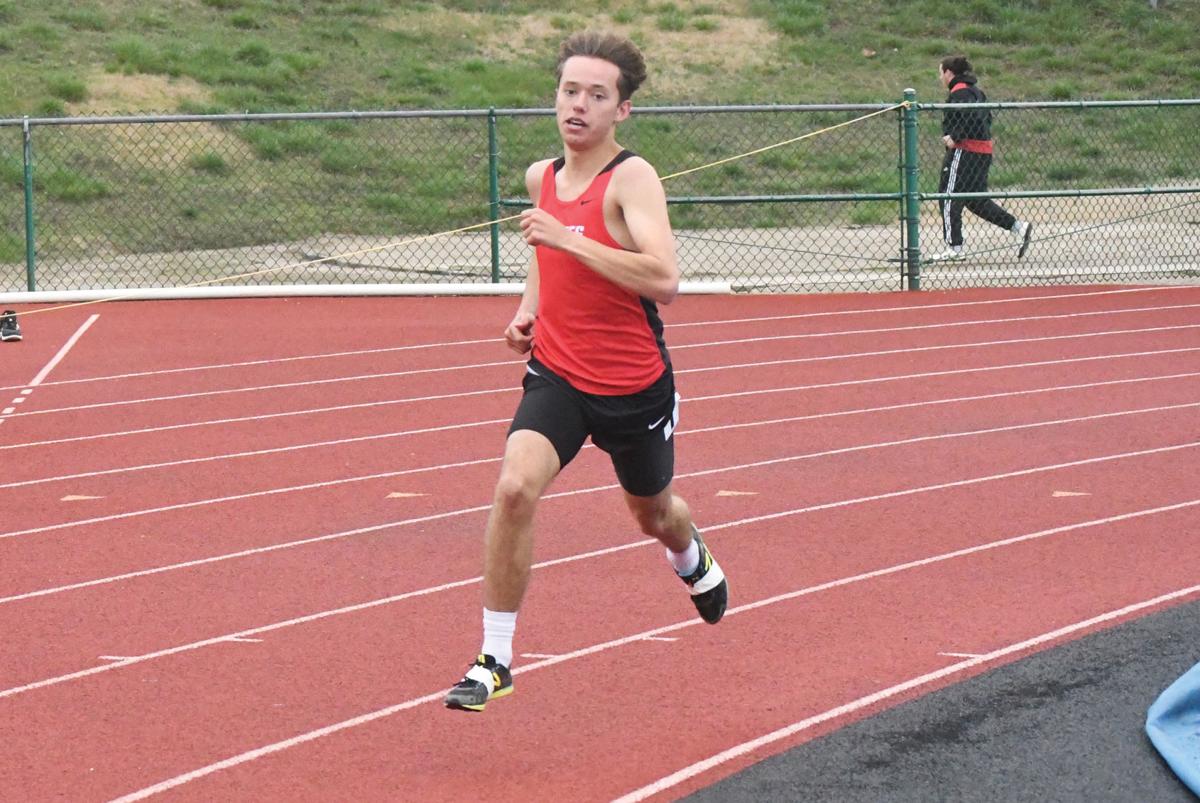 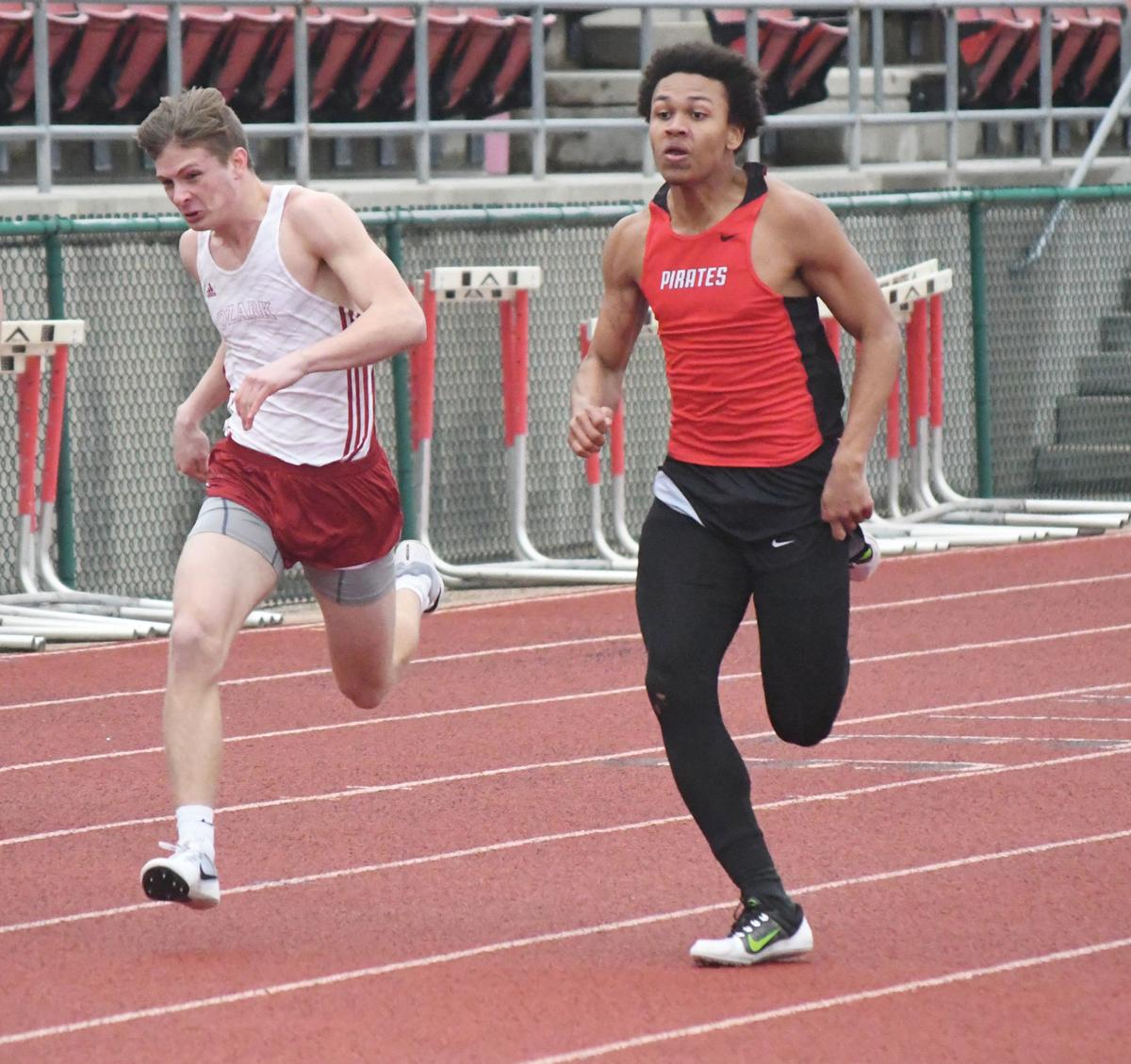 Michael Sylvester (right) eyes the finish line in the 100 meters on Thursday night. Sylvester turned in a ninth-place finish in the event.

Branson senior Collin Pepper (right) sizes up his opponents as he hits the home stretch in the 400 meters at the Branson Invitational on Thursday night. Pepper finished third.

Michael Sylvester (right) eyes the finish line in the 100 meters on Thursday night. Sylvester turned in a ninth-place finish in the event.

Branson High School track and field coach Kevin Blackwell readily admits he had no idea what to expect out of his boys’ team going into Thursday night’s Branson Invitational.

It was his team’s first big meet of the season.

The weather – windy and cold, with wet conditions and temperatures dipping into the 40s – was not conducive to fast times and athletes in their comfort zone.

Long after the sun set and the meet ended under the lights at Pirate Stadium, Blackwell knew a little more about his team, and had a definite opinion about the performance.

“That was incredible,” Blackwell said. “I had no expectations of that going in. I knew we had some pretty good kids, but I didn’t know that they were going to perform that well.

“Everybody outperformed expectations and did great.”

Branson ran away with the team title, collecting 164 1/2 team points. An always-tough Carl Junction team was second, at 150 points. Reeds Spring (102) was third.

The Pirates won six events, including a pair of relays and four individual events.

Showing the way was junior Keifer Dooley, who wasn’t seriously challenged in sweeping the 1,600 and 3,200 meter events. Dooley won the 1,600 by more than two seconds ahead of runner-up teammate Reece Long, finishing in 4:51.12, and Branson’s Zachary Seitz was eighth (5:02.11).

“With Dooley, he didn’t have much competition pushing him, so when he has somebody pushing him, that’s going to drop his time quite a bit, too,” Blackwell said.

Dooley, Seitz and Long were joined by Tanner Vejraska on the winning 3,200 relay team (8:43.84), with a margin of victory of more than 26 seconds. Branson’s 1,600 relay team also took gold, with the foursome of Rashaud Johnson, Ty Werling, Nick Pead and Collin Pepper posting a time of 3:38.40.

Branson’s other two individual titles came in field events, from Britt Pierce in the high jump and Reagan Ulrich in the pole vault.

The most impressive part of the meet for Blackwell was how much improvement he believes his team can make.

“Time-wise, I think we’re right where we need to be at this point in the season, and I think we still have room to improve,” Blackwell said. “That’s a good thing. I think we can get better and we can get faster.”

Branson had several individuals notch team points in the field events, even with the javelin competition – with returning state qualifier Trey Hoenie – called because of the conditions.

Branson will be back in action on Thursday night, traveling to Rogers, Arkansas, for the Whitey Smith Relays.

The Wolves used dominant performances in the field events to pave the way to a third-place finish in the team standings.

Asa Baker won the shot put with a final distance of 47 feet, 8 inches, and teammate Grant Clark was eighth (41-5). In the triple jump, Kyle Modlin claimed gold with a distance of 40 feet, 2 inches. Teammate Devin Hackathorn was third (38-8).

Austin Bradfield won the discus (127-6), with Grant Clark fourth (126-4) and Baker sixth (117-6). Joshua DeJarnette was third and Devin Hackathorn was fourth in the high jump, both clearing 5-8.

Marvin Walters claimed a victory in the long jump, leading the Tigers to a sixth-place team finish in the 10-team field.

Walters put up a best distance of 10 feet, 11.25 inches in the finals to win the event and edge out Reeds Spring’s Modlin. Walters also finished sixth in the triple jump, with a distance of 38-2.